This article is part of my ongoing “Indie Fighting Game Thursday” review/retrospective series, now on supercombo.gg! This week we talk about the sign-up beta version of Resistance 204X, an unconventional, still in-development fighting game that plays like a hybrid between a platform fighter, a traditional fighter, and the indie hit Nidhogg.

I have stumbled upon Resistance 204X for the first time on Reddit. The flashy presentation, the fast movement and the “defeat your opponent until you can reach the goalpost on the other side of the stage” made for a very compelling first impression. The gameplay trailer later that month “sold” it even more. But I honestly had my doubts—was the game going to be style over substance or was it going to satisfy those expectations?

After playing the sign-up beta, I can answer that question with a resounding “Yes, Resistance 204X delivers exactly what it promises”.

My first impression when watching this game in motion was “it’s the spiritual successor to Nidhogg I was waiting for“—as the official sequel deviated from the feeling and gameplay of the first game in significant ways. While my take might have been premature, one cannot avoid noticing the similarities: fast pacing, short time-to-kill, win by reaching your goal/prevent your opponent from reaching it, varied platform layouts with chokepoints and high/low ground. But in order to test my assumptions, I had to put my hands on an early build of the game… which is what actually happened. 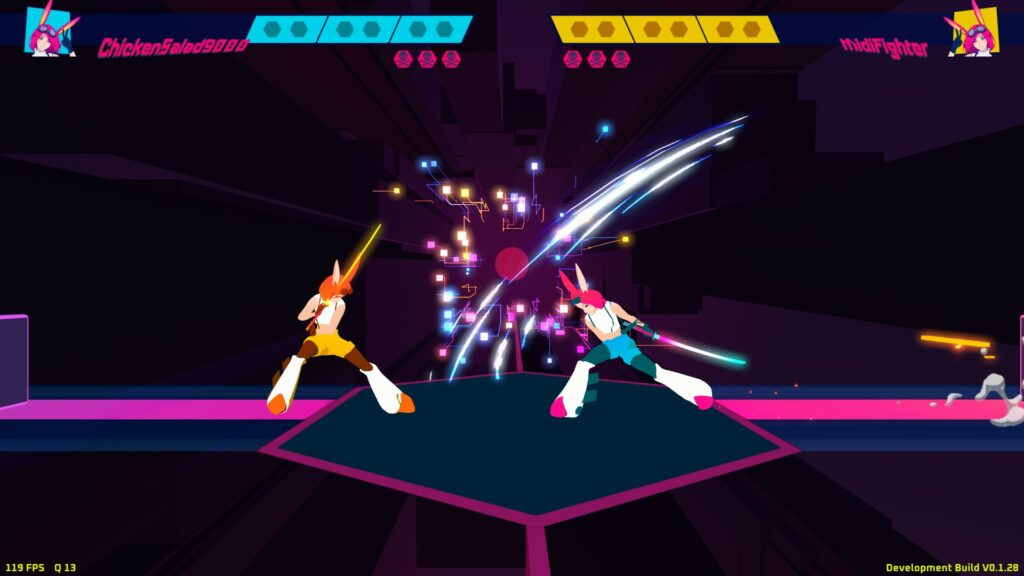 In the newest build, each fighter has three life stocks. Chip damage now removes one dot from the segmented life bar and will cause a guard break if a hit is blocked with no energy left (screenshot from build 0.1.28).

Welcome to the Matrix

Once I found out there was a sign-in open beta, I immediately reached out for the developer to get a key. Then, after a brief fight against my email provider’s spam filters—good luck with self-hosting emails and going through Microsoft’s or Google’s overzealous anti-spam systems—I finally received my invitation letter, including some extra goodies like a preview comic and part of the soundtrack.

It was time to duel. 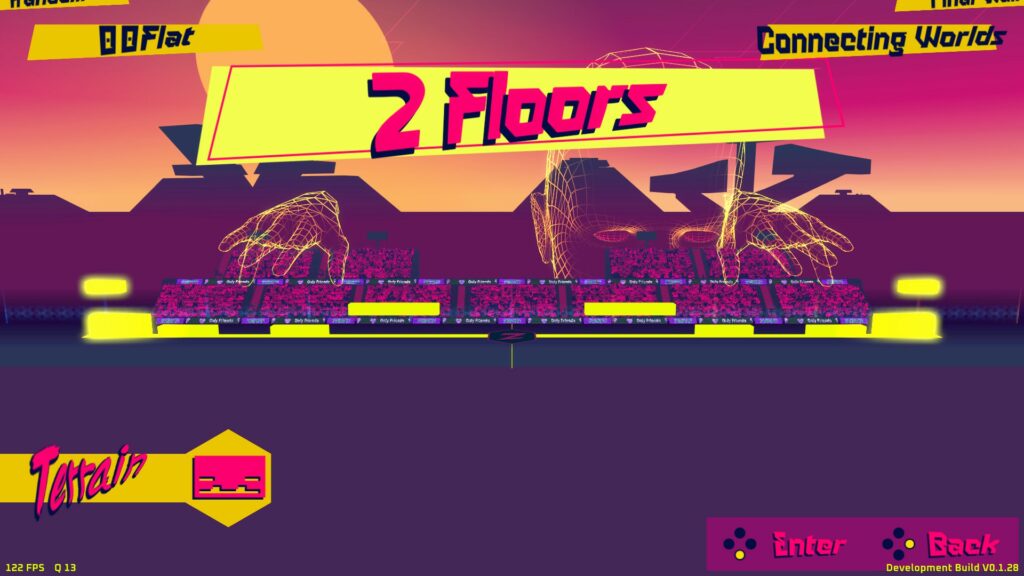 There are several stage layouts, each with interesting platform configurations. For those who hate platforms, there is also a completely flat option (screenshot from build 0.1.28).

I was pleasantly surprised by the setting. While the developer is South American, he collaborated with talents all around the world and set his game in Romania, near future. The main character is dubbed in English by a Romanian voice actress, which adds some authenticity to this choice. Resistance 204X might very well be one of the first fighting games taking place in this European country without falling into the Wallachia/Transylvania stereotypes.

As for the plot, it’s the year 204X. The world is a polluted wasteland and everyone now “lives” inside Akkadia, a virtual reality metaverse run by Facecorp (duh!), under the iron fist of its tyrannical ruler, Sargon7. The game focuses on the resistance movement, trying to revoke admin rights from Sargon7 in order to free society.

This premise is currently explained both in the preview comic available with the sign-up and in the in-game opening cutscene. 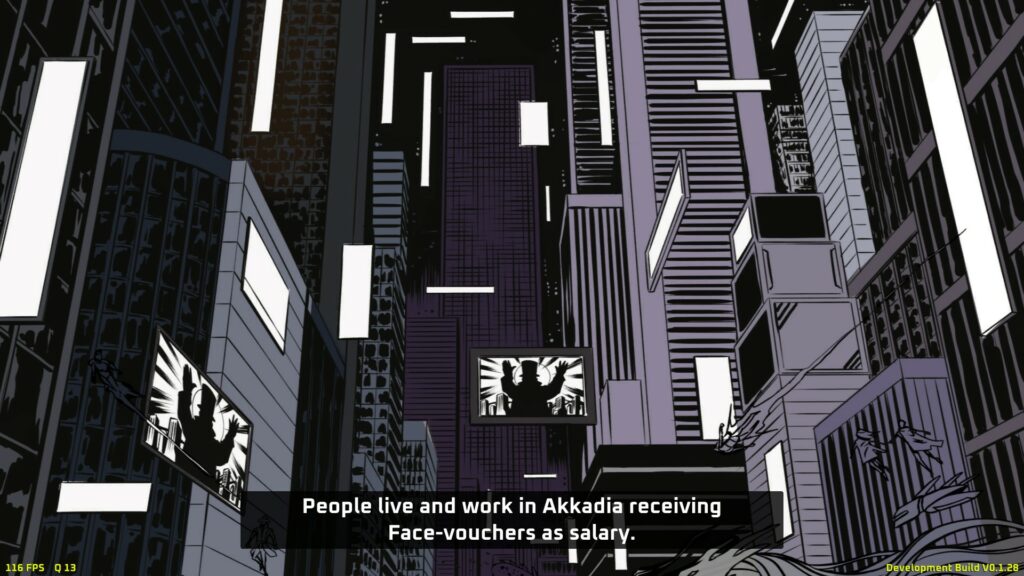 The game is set in a virtual, late-stage-capitalism, metaverse-ish cyberpunk hellish landscape. I don’t know if this is intended as social commentary, but it lands a bit too close home concerning our future perspectives (screenshot from build 0.1.28).

The game runs on a two buttons system—Light and Heavy attack. Jumps are performed either by tapping up or by pressing a dedicated button. Movement is tight and there are several options, including the evergreen ground dashes, air dashes, and double jumps, allowing for some crazy mobility. The moveset of the only available character so far is pretty balanced, with a target combo Light-into-Heavy, a standard grab (forward + attack while near your opponent), two dash attacks, and two special moves—a projectile and a dragon punch, .

As of version 0.1.28 (latest as of September 2022), there is an in-game move list which shows all specials. From my test with it, the fireball seems to be a charge attack, while hitting the right timing for the dragon-punch-like move isn’t the most straightforward thing to do.

Blocking is performed by holding back before an attack connects. However, all attacks deal chip damage and the overall damage output is stellar: one combo is usually enough to knock out your opponent, allowing you to advance towards your target area. The goal of a match is to reach the opposite border of the arena, defeating your opponent until you have a clear path to the checkered line.

When a player is defeated, they will respawn after a short cooldown time proportional to how many times they have been bested—and they will land with a bang. The comeback blast can immediately K.O. the opponent on the spot. This means that you need to be on your toes even after a kill and tread very carefully when the big, pulsating exclamation mark appears on screen.

There are different stage layouts, from a completely flat one, to several distinct platform combinations. Overall, the variety is already refreshing at this point in time.

During a match, contrary to Nidhogg, there is only one screen worth of running and not multiple, interconnected maps. This isn’t exactly an issue, as the fights still last a decent amount of time and the player in the lead can’t run away when the opponent respawns.

It all felt nice and dandy, when testing the game on my own. However, there was just a hurdle to overcome before being able to taste how the game felt, joypad in hand: This first version of Resistance 204X doesn’t have AI bots to play against. Luckily for me, this is nothing a good friend and a fresh Parsec installation couldn’t help with. 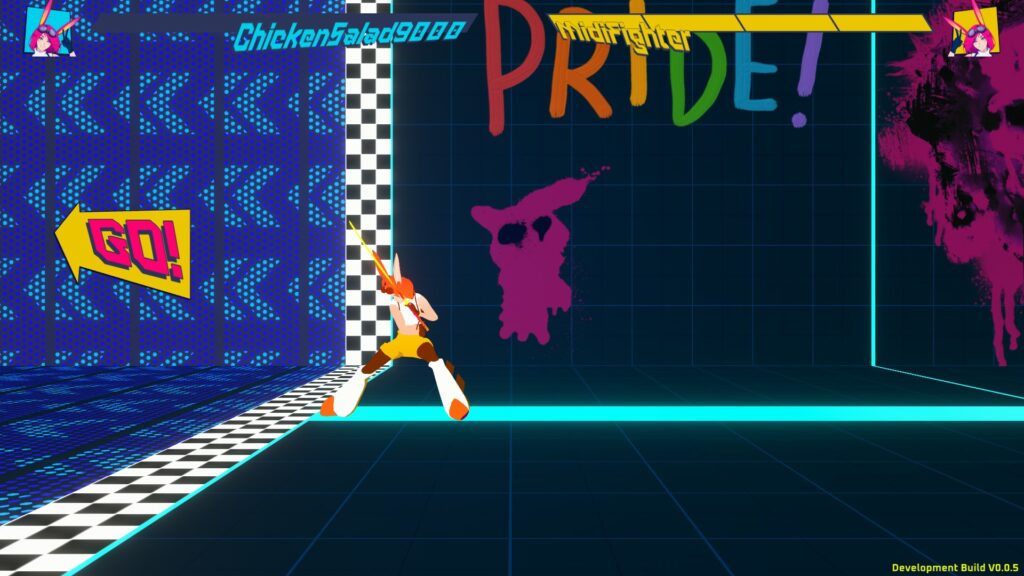 Once your opponent is defeated enough time, you can cross the goal and win the match. However, if you wait for too long, the door will close again, allowing your opponent to shatter your dreams of glory (screenshot from version 0.0.5).

My friend and I played around fifteen matches in a row, testing all stage layouts. The game was positively addicting and, as we slowly figured out the special move commands and how to grab, we kept on building up new strategies to one-up each other.

(Note: this set was played with development build v0.0.5, which is relatively old compared with the current 0.1.28)

After five or so matches, we started getting even and trading blows at an alarming pace, even considering the built-in Parsec lag (Germany-to-France, both on a Wi-Fi connection, like gorillas in the wild use to have). It was oddly satisfying and totally worth the time spent.

Matches can be fairly long, due to the constant back and forth. However, the more times I killed my opponent, the longer it required for them to respawn, streamlining the experience a bit. Since there is no timer, a match could virtually last forever. In our test, though, this didn’t happen very often and every match concluded in a reasonable amount of time.

At seemingly random times, Justin Wong’s face would appear on screen yelling “Toasty!”, accompanied by vuvuzela sounds. Yes, that Justin Wong, of EVO Moment 37 fame. The developer confirmed in a private message that it’s an official cameo and that Wong was very happy to lend his voice for this extra. Honestly—and this is where our age might be showing—that felt a bit out of place and/or too meme-y for our tastes.

The developer has listened to this concern and planned to add a toggle for this function in the full build of the game. 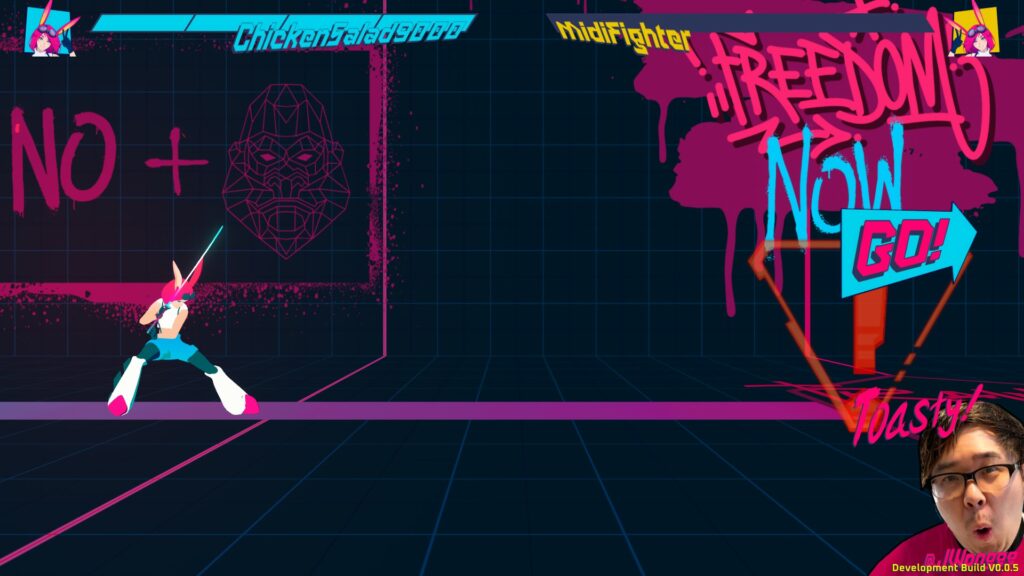 This is *not* a meme Photoshop edit. This is an actual screenshot from the game. Justin Wong gave his voice to the “Toasty!” clip that plays during certain key moments, accompanied by a YouTube-poop-worthy vuvuzela sound. It’s… an experience (screenshot from version 0.0.5).

Resistance 204X is currently running a free sign-up beta. You can request a Steam key on the developer’s website. In the meanwhile, you can wishlist the game on Steam and follow the developer’s Twitter account. The game features only a functional versus mode between two players, but it feels quite addicting if you have a friend to try it out. The current build 0.1.28 (as of writing this article) had a bug that froze the game when taking a screenshot with the Steam overlay so be aware of this in case anything happens.

Notice that the game is still an open building site, and things can change pretty heavily in the next few months!

Finally managed to play @Resistance204X with a friend via Parsec and we had quite a blast. Still need to get accustomed to the special moves inputs, because I need to figure them out [Game: Resistance 204X] #gamedev #indiedev #FGC pic.twitter.com/oGQT4jhlGN

Name: Resistance 204X
Developer: Julio Quiroz (Twitter, website)
Available on: PC (wishlist on Steam)
Price: TBA
Year of release: TBA (probably early 2023)
Engine: Unity
Status: sign-up beta (available on Steam, sign-ups open on the developer’s website. Versions tested: 0.0.5 and 0.1.28)
Netcode: TBA, currently none (Parsec)
In one sentence: A unique mix between a traditional and a platform fighter, simple to pick up and play. The goal is to gain ground and reach your target in the stage, making this a sort of spiritual successor to Nidhogg.

Special thanks to the developer Julio Quiroz for sending me a early key to the game and to my friend Ciao for testing it with me through Parsec to understand how it “flows” when played against another human player.