This article is part of my ongoing “Indie Fighting Game Thursday” review/retrospective series, now on supercombo.gg! This week we talk about the first pre-alpha version of 52Beatup, a game by the hobbyist developer Roeb which takes a simplified fighting game and adds a compelling deckbuilding mechanics on top of it.

The number of indie fighting games which have been recently published or announced is astoundingly high and I’m somehow starting to lose count of what is coming out when. On one hand, this is good because it means that the genre is thriving and I’ll have material to write articles until the heat death of the universe (give or take a century). On the other hand, it means I’m more likely to pass on stuff I would have normally found out about.

This time, though, I was lucky. I’ve met Roeb by complete chance in the Duels of Fortune Discord server, where he used to post some animation clips of his upcoming project, 52Beatup. Intrigued by the art style and premise, I decided to join his newly founded Discord server as soon as the first playable version of the game dropped—v.0.0 pre-alpha.

Then, I finally sunk my teeth into it and—like a certain King of Games would have said—decided it was time to d-d-d-d-duel! 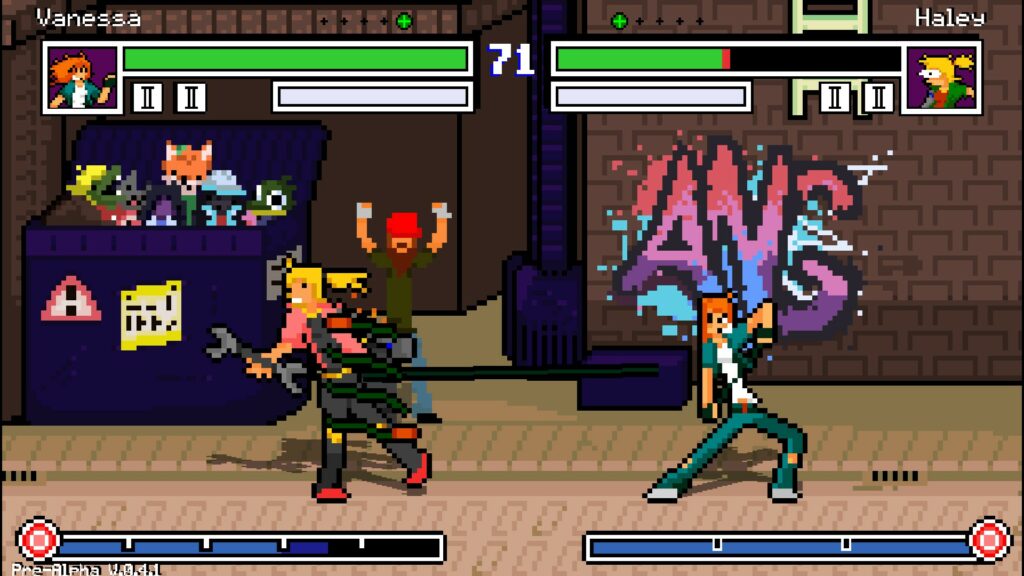 If one booted up 52Beatup and just started playing in training mode, probably they wouldn’t be able to discern what makes this game unique. On the surface, 52Beatup is a simplified fighting game which shares part of its design space with Fantasy Strike: There is no crouching, there are no motions, all attacks deal a moderate amount of chip damage, the only true mix-up is strike/throw and the default match length is a best of nine/first to five, due to how fast rounds go.

The similarities kind of end here, though, as 52Beatup piles up more basic systems compared to the game designed by David Sirlin. For a video comparison between the two design philosophies, please refer to this excellent video by MrMKL, who analyzed the similarities on stream.

Characters have access to three normal moves (Light, Medium, Heavy), a grab, four command normals (depending on the character), two special moves and one super move, which doubles as a combo breaker. There is a dash action too, which has its own shortcut button.

In the default joypad configuration, special moves are tied to the bumpers (LT/L1 for Special 1 and RT/R1 for Special 2) and share a peculiar trait: Much like in the Art of Fighting series, they consume a pip of super meter. Players can’t perform special move if the meter is empty, thus they need to be conservative with their approach. Special moves are however pretty powerful and using them wisely is a skill worth learning. Most moves can be dash-canceled by pressing the Dash button, for the cost of two special pips too.

Super moves are performed by pressing the Super button (Left Bumper/L2 as a default input on joypad) and they deal a fair am0unt of damage. Rather uniquely, compared to other games, 52Beatup gives the player one super stock per round available from round start. So, yes, if you really want to, you can start the match with a raw super. Not that it’s advised, but gorilla play has its advantages at times.

Where 52Beatup diverges from a traditional fighting game, is in its deckbuilding mechanics. See, at the end of each single round, each player can choose between three cards, with the loser picking one first. Yes, the name isn’t a reference to a joke card game for nothing.

Cards have a plethora of effects, both positive and negative, which can wildly alter the flow of a match. Imagine being able to store up to ten special pips instead of the default three, having three super stocks, recovering 35% of damage dealt and having armor on your forward dash: As crazy as it sounds, this is a perfectly legal and possible combination.

As an additional note, each special move has three different levels and there is only one way to ramp their power up: picking the correct card, when given the chance.

Powering up special moves through picking the correct card not only increases the damage, but also adds special properties to the move. In this example, Haley’s power wave sends the opponent flying when powered up and has a bigger htibox the higher its level is.

Screw the rules, I have the first pick

By choosing wisely, you can turn your character into an unmovable fortress or a speedy, one-hit-wonder glass cannon. Of course, there is a catch (because there is always one): Since the loser picks first, the cards are randomized, and there can be more than one copy of each card, one can willingly choose a less favorable card to put the opponent in a pinch.

Say that at one point the only choices are a flat 50% health reduction for additional speed, a minus five special pips for additional chip damage and a card that increases projectile knockback. Even if your character doesn’t have projectiles, you could pick the latter to force the opponent to choose between two options that can destroy their build and make the rest of the match a snowball.

These considerations make a match in 52Beatup a wildly difficult beast to describe. I have been utterly convinced of it when, in a moment of madness, I drew the “400% damage bonus on first hit” card after maxing out my special 2 and achieved the unthinkable: a one hit KO on round start raw special move (yes, not even a super).

That was the moment that sold me this game. 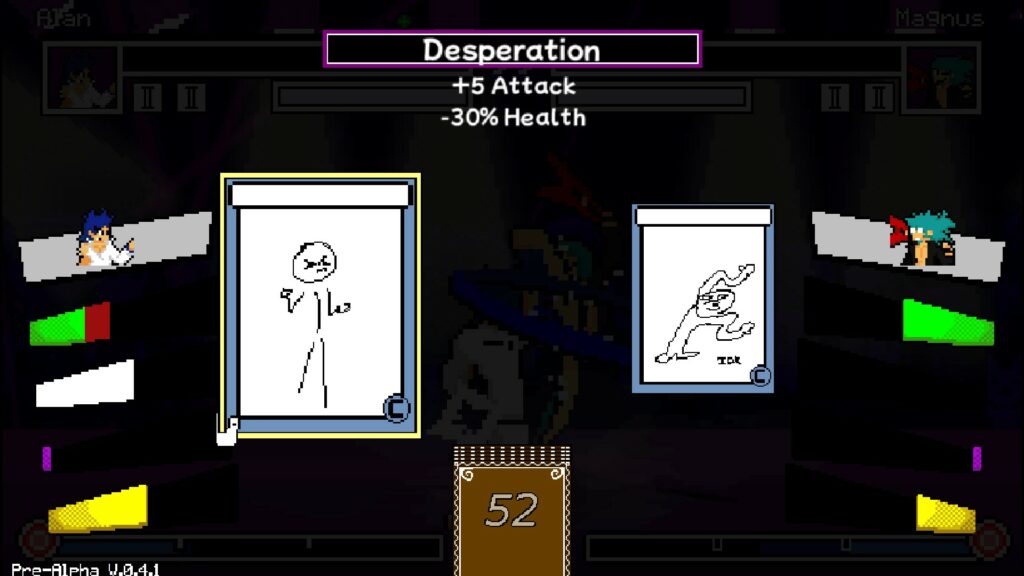 After each round, the players can choose a card to apply a new effect to their character. Not every effect is positive and the loser chooses first (in this picture, the Magnus AI picked up his card already). The cards are still sporting temporary “programmer art”, but there is already a decent variety of them implemented.

52Beatup currently features four playable characters (out of thirteen planned): the electric guitarist/master of whiff punish Magnus, the mechanic girl with a bionic arm Haley, the yo-yo ditz zoner Vanessa, and the no-nonsense pseudoshoto Alan. Magnus seems currently the best character, due to his immense range and humongous damage, but balance is going to change quite often during the course of development.

If one delves into the README files, however, there are some… interesting instructions to unlock a fifth, secret character: a cat. Cat is the joke character of the game, accessed by entering the character selection menu, pressing “cancel” to exit, clicking on the cat sprite when it pops up at the bottom of the screen, then scrolling up in the selection screen to get the hidden spot.

Cat is an absolute wild experience, with a metric ton of pop culture references, including but not limited to Phoenix Wright from Ace Attorney, Zero from Megaman X, Vergil from Devil May Cry 5, and Kamina from Gurren Lagann, sporting a bizarre moveset that includes an ambulance driving over the opponent and an exploding mech that can turn into a toaster and shoot rocket pieces of paper. Yes, it’s THAT kind of character. 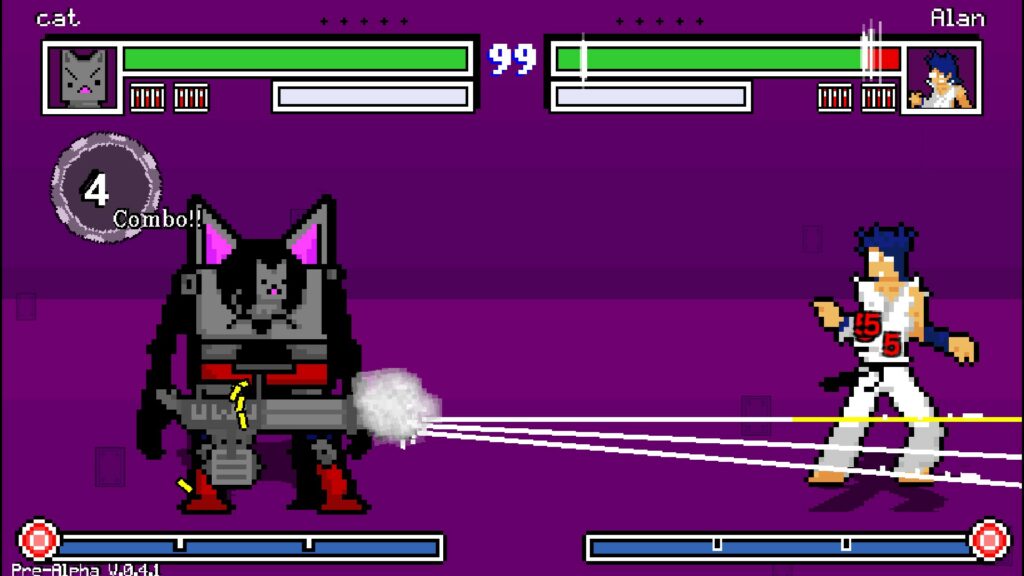 This is cat. Cat has a mech. The mech has a minigun. But it can also explode. Cat is cat. Cat is everything. To select him, one has to press “cancel” while in the character selection screen, click on the cat sprite, then scroll up with the cursor until he’s selected.

52Beatup is still a very early alpha (version 0.4.1 was the one I tested) and it shows: The game is currently plagued by a plethora minor technical issues, such as menu navigation woes, some non-functioning training mode options, and a sketchy counter-hit detection. Moreover, one can fight only a basic AI, which is available for only one character (Magnus). Oh, yes, about the AI… even if the option to select vs. AI is greyed out, it’s in fact selectable and how I tested most of this game’s mechanics, together with a versus Parsec session against a human opponent.

Joypad in hand and against another human, the concept is very intriguing and prone to very interesting, lighting fast rounds that can either result in a tremendous snowballing or in a wicked back and forth until round nine. 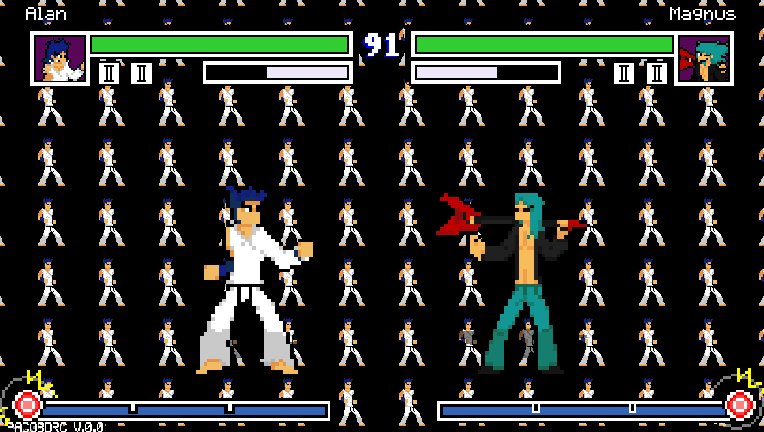 In the first version of 52Beatup, by pressing the Tab button in the main menu, one would be thrown right into training mode in the ALAN DIMENSION, a glitched backup stage with glitched audio which featured countless Alans in the background animating in sync. This was removed from the current build.

52Beatup is available for download on itch.io for free. You can follow its development on Twitter or join the Discord server for more information and some online matches through Parsec. The game currently offers a local versus, a fairly extensive training mode, and a basic vs. AI single match mode.

For those who have troubles starting a two-player match due to some finnicky controller detection, here’s a word from the developer Roeb:

Hitting enter/start on the selected device will give it priority on launch, but whoever is “Player 1” kind of gets insane override when navigating menus. The most consistent way to set up the game is to start up 52Beatup with the keyboard (pressing Enter), then navigating to the character select screen and hitting Start on the joypad. Its working for both Joypad v Keyboard and Keyboard v Joypad on my side right now.

Special thanks to MrMKL for his video analysis on the parallel design decisions between 52Beatup and Fantasy Strike.