Bonus issue out of hiatus! This article is part of my ongoing “Indie Fighting Game Thursday” review/retrospective series, now on supercombo.gg (yes, I know it’s not Thursday, but once in a while I can break rules too)! This week we talk about the early access version of Duels of Fortune, a game by the dynamic duo Cosmic Hat Games, who after four years of development has published a first open, early access build!

Development takes very different paths and shapes from the beginning of an adventure to its end. There are developers, like yours truly, who prefer to cobble together an alpha showing the game’s concept and immediately put it in the hands of the players—sometimes to the effect of receiving scathing reviews or heavily negative feedback.

There are others, however, who prefer to struggle with a close cadre of iron-clad-willed beta testers and release the fruit of their fatigue to the world only when it’s polished enough for their standards.

The dynamic duo Cosmic Hat Games belongs to the second category and, after four years of development builds, finally decided it was time to show their brainchild to the world—the colorful 2.5D fighting game Duels of Fortune! Rattlebone lost his head, but this is hardly a problem for him. It’s more an issue for his opponent.

Welcome to Duels of Fortune!

Duels of Fortune is, under many points of view, a sort of singularity in the current fighting game panorama. Its cartoony, cel-shaded 3D style stands out even as a part of the indie scene and its focus on single player content is nothing short of a black swan—a status shared by a small number of other titles like Beatdown Dungeon. The premise of the game is—on the surface— pretty simple: casino tycoon Sylvan Blackjack invites everyone to his own island, where a tournament called Duels of Fortune will be held and the winner will be able to wish for whatever they want.

This obviously attracts the attention of several characters, including the fiery fire user Clyde, the shy engineer Annie, the anger-driven Red, the emotionless Shoto, and… a cadre of animated skeletons. Plus an interdimensional wannabe superheroic disaster (who might or might not be canon to the game). And a living stickman doodle (who is DEFINITELY not canon to the game, as he breaks the fourth wall as often as Deadpool).

Suffices to say that the character variety is the least of this game’s concerns, and the colorful style really sells it. Seeing the game in motion feels like watching a cartoon on the TV, in the best possible sense of the expression. 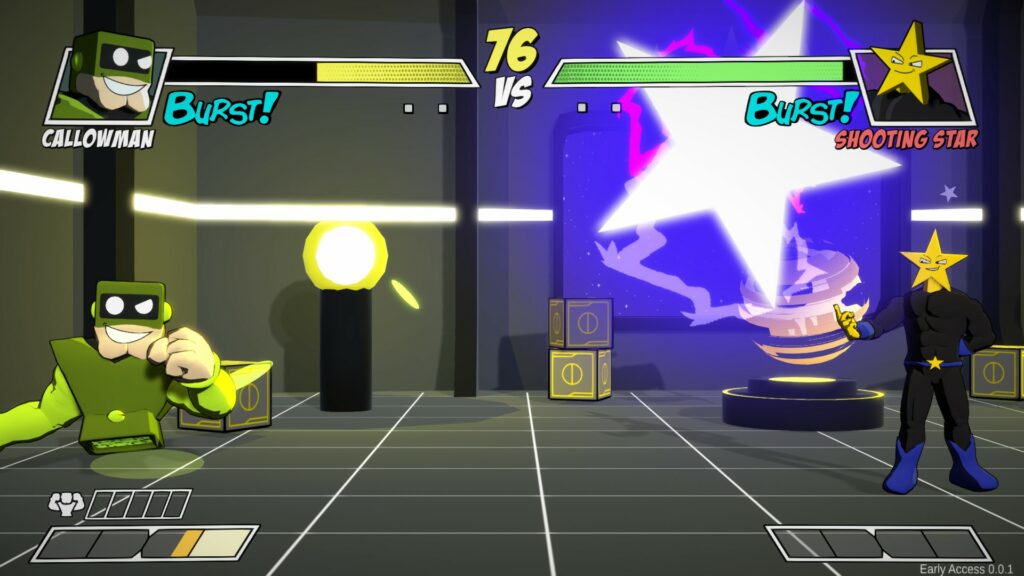 Boss battles can be wild. Shooting Star pulls a Frieza every time he has full meter. Good luck avoiding it.

Mechanically speaking, Duels of Fortune is a pretty interesting game, using a 8-button system that is perfectly comfortable on pad, but might be hard to use properly on other peripherals. At its core, it is a 2.5D game with simplified controls and air-dashes.

There’s your standard Light, Medium and Heavy attack buttons which can be chained together on hit, going from the weakest to the strongest attack, and allow for one reverse beat per combo. Then, there’s a Special button which is used to access each character’s unique moves. Specials and command normals are performed by simply pressing a direction with one of the attack buttons. There are no motion inputs in the game but there is a character with charge specials (more on this later).

The other four buttons are used for a variety of extra actions:

Overall, the control system feels responsive enough, but I must emphasize how the absence of input macros make it impractical to play this game with a 6-button arcade stick. There is also a small quirk being worked out, as the game has currently no input buffer. This isn’t an issue per se for chains of attacks, but it might be a bit jarring while trying to buffer a forward dash or anything else out of guard. The fact that this game doesn’t use motion inputs for special moves, though, makes it a small annoyance at best. 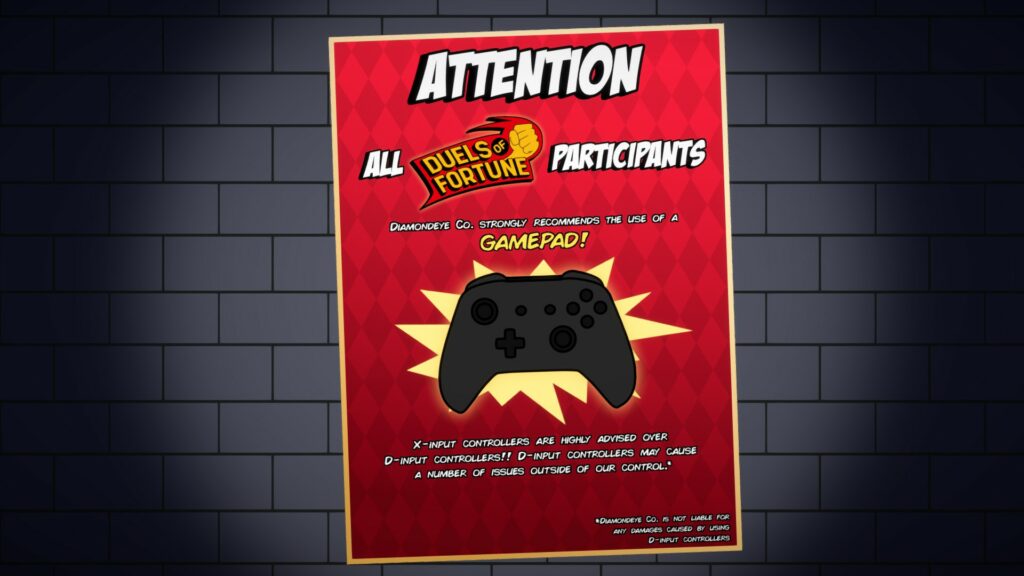 Real Duelists of Fortune use a gamepad.

Please notice that there is an underlying Unity bug in the input interpreter that causes the game to read the trigger buttons of two connected joypads as if they were pressed by the opponent. The bug can be solved by connecting the controllers after the game is started and surfaces only if more than one controller is connected at the time the game is booted up.

The super meter is segmented into four sections. Two pips are required to perform any super move, but meter has also some additional uses:

There are no ex-moves that use up only one pip of meter, but meter management is quite interesting as it is and—in the opinion of this writer—doesn’t need to become any more complex. 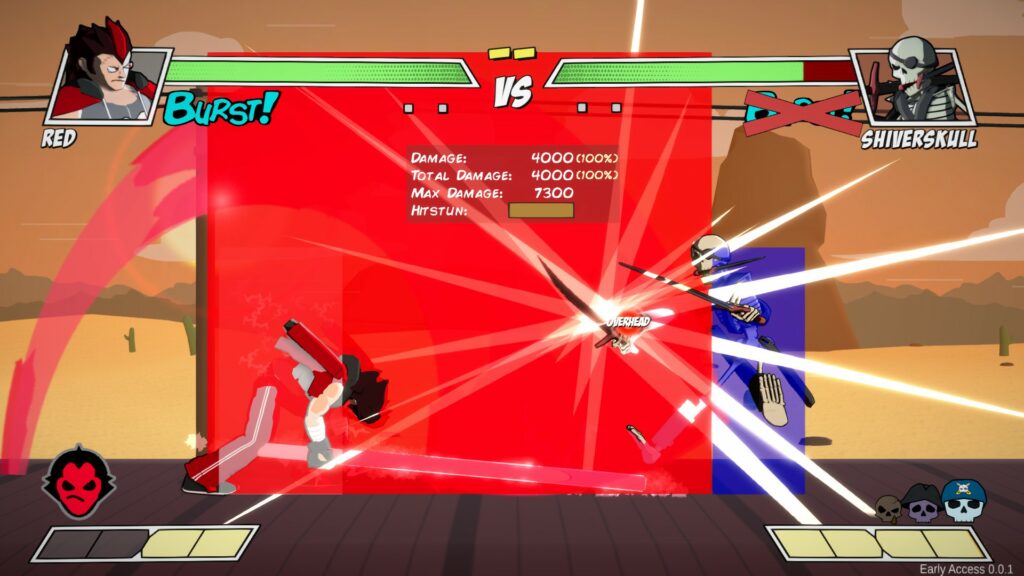 Training mode has many tools one would like to have when labbing characters, like visible hitboxes and meter refill. Also, yes, that is the hitbox of Red’s second super. And, yes, it’s an overhead. Good lord.

What is cooler? Skeleton pirates or skeleton knights?

The cast is incredibly varied and sports a grand total of eleven playable characters, plus five utterly broken, weird or gimmicky boss characters.

I will not talk about the five bosses, because it’s better if you go in blind and be surprised by them instead of reading about them—words cannot convey what these eyes have seen. 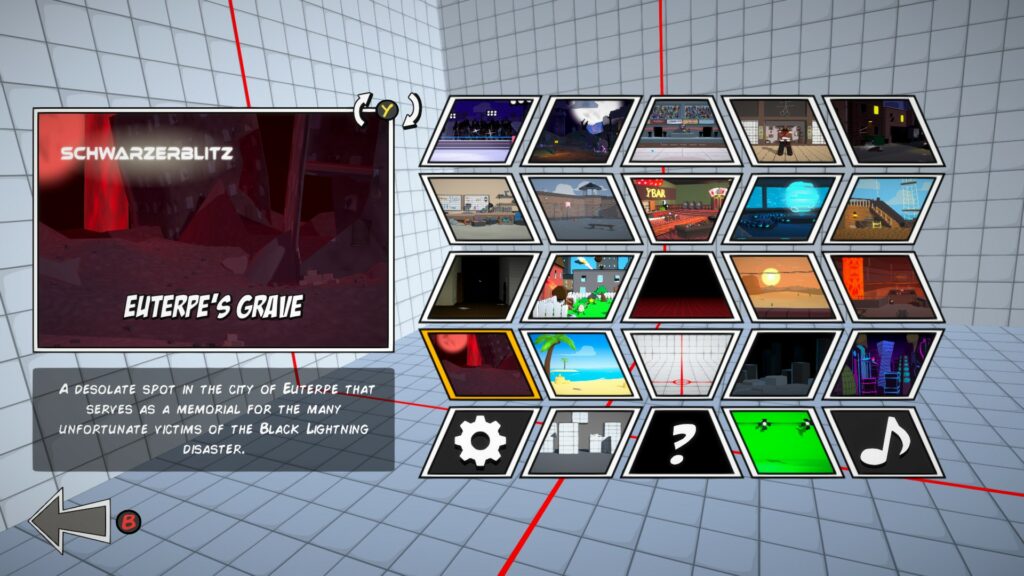 Look, I’m not one to flaunt his own crossovers, but for a developer this is undeniably cool. Both versions of Euterpe from Schwarzerblitz are available as stages in Duels of Fortune. And, huh, did I mention that some stages have toggleable hazards?

Minigames, mission mode and all those shiny single-player toys

First, let’s address the elephant in the room: Duels of Fortune is not going to have any form of online netcode. Due to the specific engine used and how the code evolved in the last four years, it is very unlikely this game will ever have any true chance to receive the rollback treatment. However, to offset this, the game offers a great amount of offline content, ranging from the classic combo trials and arcade mode, to less conventional mini-games, even less conventional missions, boss battles, and quirky extras like stage hazards, weird physics and big head mode.

While all base characters and stages are unlocked from the very beginning, there is a wealth of unlockable costumes and stage variants that can be obtained by clearing arcade mode or mission mode. There are also five unlockable boss characters (that will be hardly tournament legal, if at all), which add more fun to the mix.

The included minigames range from the classic “break the car” of Street Fighter 2 fame, to a horde battle either against skeletons or against Schwarzerblitz‘s very own Haemophages (yes, it was quite the crossover event), to a ball juggling contest, to a “run through the stage before a shadow abomination grabs you” stage that wouldn’t feel out of place in Super Smash Bros. Melee adventure mode.

There is quite a lot to do, and this level of variety is something I hope more games will pick up on and take as an example. The menu art is nothing short of incredible. There is a lot to do in Duels of Fortune, which compensates completely for the lack of online modes.

The game is available on GameJolt and itch.io and can be played free of charge, at least until early access ends. There is also a dedicated Discord server for matchmaking, bug reports and game talk. You can follow the development through Cosmic Hat Games’s Twitter account. The cinematic work done in Arcade Mode and for super moves is something worth noting. The game’s cutscenes are very well animated and Sylvan’s introduction in arcade mode has a sense of gravitas that is hard to overstate.

Today’s article was very personal for me. I have been in touch with Cosmic Hat Games since around 2019, I have been a closed beta tester for the game and even shared a character with them: Sir Rattlebone in Schwarzerblitz is a guest since 2020 and Johnson from my own game will feature in theirs relatively soon. Schwarzerblitz also offered a free Duels of Fortune costume set back in 2021.

In the meanwhile, Duels of Fortune got shaped more and more into a refined, little game, ending up with additional crossover content, such as a Shoto Goto costume from HYPERFIGHT. In 2022, everyone will finally be able to have a run at this game, and I’m feeling a little bit proud of having been a small part of its development.

Ben and Kaleb, the duo behind the Cosmic Hat Games moniker, still have a long way before the full release, but their first public step here is something that pours love and dedication from every pore and is totally worth playing.

Now, it’s time for all of you to head to Eagleton and try your luck. What will be the wish you’ll ask for, once you topple Sylvan forever? Shoto Goto from HYPERFIGHT joins the Duels of Fortune roster as a costume for Shoto Kanji!

Special thanks to Kaleb and Ben for the amazing work they did on this game, for letting me access a closed beta build long ago, and for all the amazing crossovers between their game and my own Schwarzerblitz. Special thanks to my fellow beta testers (especially Mibeador, Bandana, Felix Kuma, Devi/Berks and YellowSlotCar) for sharing this wild ride together!