This article is part of my ongoing “Indie Fighting Game Thursday” review/retrospective series, now on supercombo.gg! This week we talk about Input Chaos, an unconventional, early access, physics-based fighting game with a weird control system and a lot of creativity!

Welcome to the arena

Non-conventional fighting games are uncharted territory, but something very much worth exploring. After all, after having concluded that the car is a shoto and that one can make an engaging turn-based fighting game, I have become open to analyzing every game that has the spirit of a fighting game, if not the letter. 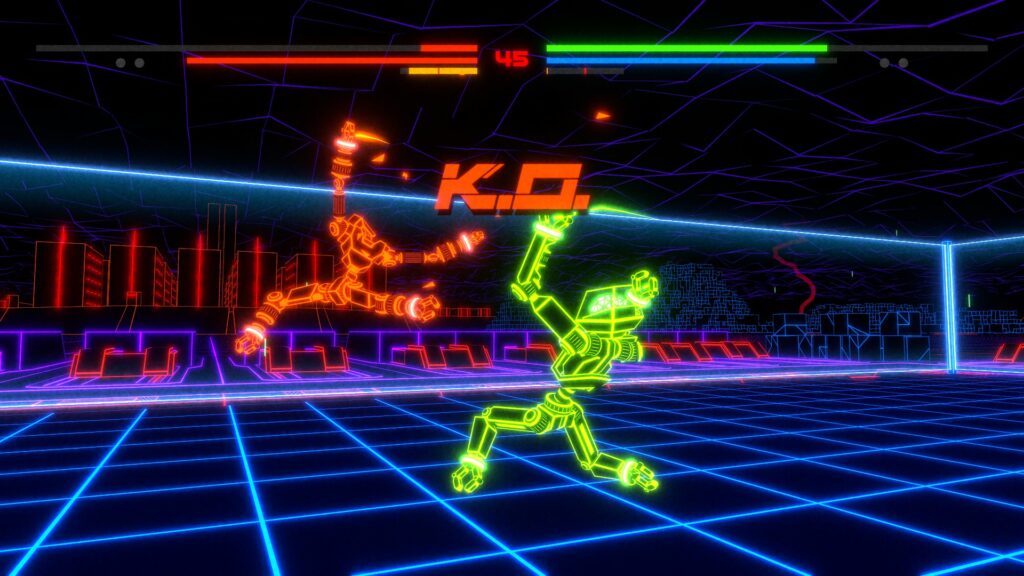 This is what I call an anti-air.

Input Chaos sports an amazing 80s VR aesthetic, made of neon lights, vector lines, trails and blooming RGB lights. Stages and characters are exquisitely rendered and—despite the relatively early state of the game—show already a high degree of polish, resulting extremely pleasant to the eyes. The core gameplay is simple: Pick a robot, select its parts to match your ideal stats or simply your personal taste in terms of appearance, and fight against up to three opponents, solo or in a team.

While on the stage, everything is allowed—weapons, traps, laser walls—but your best, most reliable friends are your fists and twitching movements. 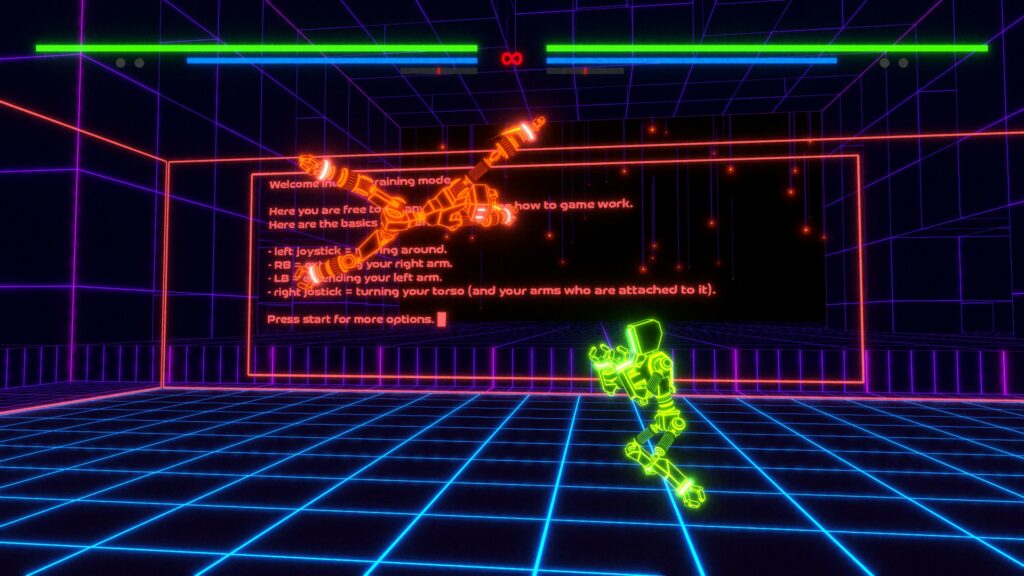 Training mode contains a tutorial that explains how to make use of this game’s bizarre input system. There is also a handy reminder of the basic controls plastered on one of the stage walls.

As the name of the game implies, Input Chaos’s control system is—indeed—extremely weird at first, starting from the movement. There are two alternate control schemes: camera-based and character-based, toggleable with the Back/Select button on your controller (NOTE: I didn’t test this game with a keyboard, as I am not sure it is actually supported, as the game requires two analog sticks to work).

While camera-based controls are active, the movement is very reminiscent of Soulcalibur or Virtua Fighter, with a classic 8-way movement. Character-based controls turn this system on its head and instead allow you to move your character independently of its orientation, as you would with an RC car: In this control system, pressing “up” will move the character forward, pressing “down” will move them backwards, while “left” and “right” will move them sideways, relative to their orientation.

During a match, by pressing the X button on a standard Xbox controller, the character will crouch until the button is released. The B button toggles crouching on and off instead. Last but not least, the A button is used for jumping and for performing a high jump while crouching.

So far, nothing out of the ordinary, except…

… except that attacking is not as simple. Attacks are tied to the bumpers, with RB and LB extending the right and left arm respectively, while the right stick is used to twist and turn the character’s torso in the desired direction. This is a vital skill to master, as just pressing RB/LB will result in very limp and weak attacks, that are sometimes not even good enough to pass through the opponent’s guard.

The trick is that, by combining arm extensions with jumps and torso turns, one can unleash deadly moves that can delete the opponent’s lifebar. Twist the torso left, extend the left arm, suddenly tilt the stick right, and you’ll get a winding slap that will send the opponent flying around the stage. One hand is not enough? Do it with two, and then flail back left.

This is just scratching the surface, there is an almost infinite variety of motions one can do, even combining jumps in-between. The only limits are dexterity, creativity and the overheat bar. 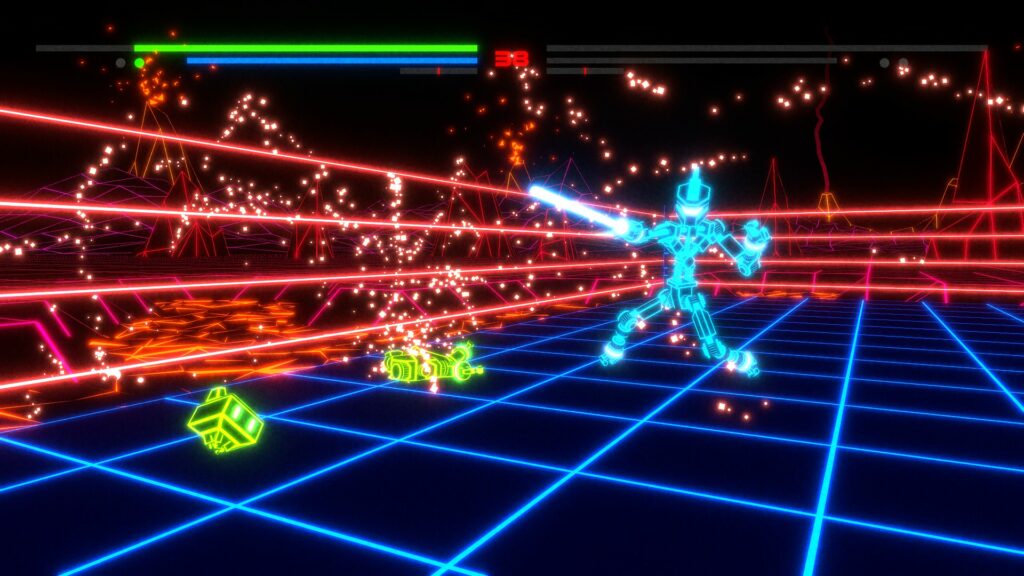 Beam sabers are the best friends of a robot.

I know what you are thinking: “If I can just twist around like a tornado, the opponent will never hit me. I’m so clever!”

Well, actually no. This is where the overheat bar comes into play. You see, moving around with the right stick with one or two arms extended will accrue a yellow bar over time. When the bar is full, your character will lose stamina and, eventually, will straight up collapse on the floor. To avoid this you must interrupt your relentless (and uncoordinated) offensive and rethink your steps. Is it worth going all in now, or is it better to play patiently? Up to you, but I won’t be the one gathering your smoldering remains from the ground because you Leeroy Jenkins‘d your way in.

Every day from now I will release a new clip from Input Chaos. The first is "Brutal Dance".#fightinggames #gaming #multiplayer pic.twitter.com/4LaHDk4f9b

Stamina, stamina, where art thou?

Aside from the health bar and the overheat bar, there is also the already mentioned stamina bar that is depleted by blocking attacks or being hit by the opponent. The remaining stamina affects the damage your character deals and being low on it might result on a very… crushing experience. Overheat will decrease the stamina bar too, causing your character to crumple if it hits rock bottom. Depleting your opponent’s stamina bar is a good way to get some hit in, completely unmatched.

I have not yet understood what triggers the loss of a part, but I suppose it might be somehow connected to the amount of damage dealt to it.

The stages can be configured for having additional traps, like saws and collapsing ceilings, that can mutilate or outright kill your neon-clad robot of choice. The stage is also surrounded by ring out zones, with or without walls. A ring out is an instant loss, thus it is mandatory to keep an eye on your position and surroundings. Laser walls deplete Stamina and can be deadly if hit with the wrong angle.

On top of the environmental damage, there is also a wide array of unfair, deadly weapons that can spawn into existence, ranging from flails, to three pronged flails, to sabers, to laser swords, to laser guns.

To snatch a weapon, one must press the LT or RT button, in order to attract it to the arm of choice. Once attached, the weapon can be operated by pressing the respective arm attack button. Some weapons are ungodly powerful and can turn the tides of the battle in an instant—the equivalent of bringing a gun to a fistfight.

In my experience, weapons can utterly break the game and turn the tables of an almost lost match in one fell swoop, some more than others. Be always on the look out for beam sabers and guns, because they could be your one way ticket to victory.

Weapons, walls and traps can be toggled before a match starts, making it easier to customize one’s experience and even out the play field, if you think the random number god is being too cumbersome to deal with. 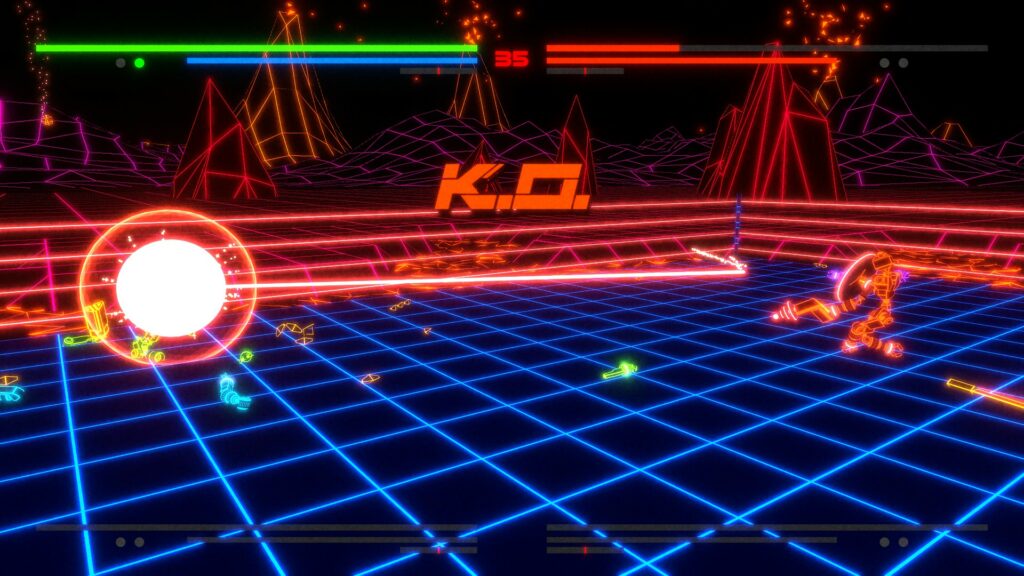 Not gonna lie, lasering my last opponent down after they lost both legs was eerily satisfying.

Custom builds and where to find them

Input Chaos has no real character selection screen. Instead, you can build your own robot before the match starts by scrolling through a relatively vast array of individual parts, with different stats. The stats affect aspects such as the damage dished out, the stamina recovery rate, the maximum weapon catch range and so on. There is currently no way to save presets, so it might be tiring to have to setup your robot every time you want to go through a match, but at least the idea is neat. Maybe the developer will add this feature in a future update.

In my tests, allocating the stats wasn’t a make-or-break, in terms of power scaling, but provided a decent variance on how the match evolved.

Input Chaos offers death-matches for up to four players, any number of which can be an AI. As motion is always more or less dependent on the opponent’s position, the D-Pad is used for changing target on the fly, allowing one to direct their attacks at the correct enemy more easily.

The AI itself is fairly brutal and will smash you to pieces at the beginning, giving you no quarter. However, it also makes several blunders… like jumping over a laser wall and falling into a crushing pit, all by themselves, or forgetting to avoid a speeding buzzsaw.

Weapons seem to make it more difficult for the AI to get the upper hand and I felt gleeful joy in actually managing to destroy my computer-controlled opponent with a laser blade, after having been crushed by them for ten matches in a row. 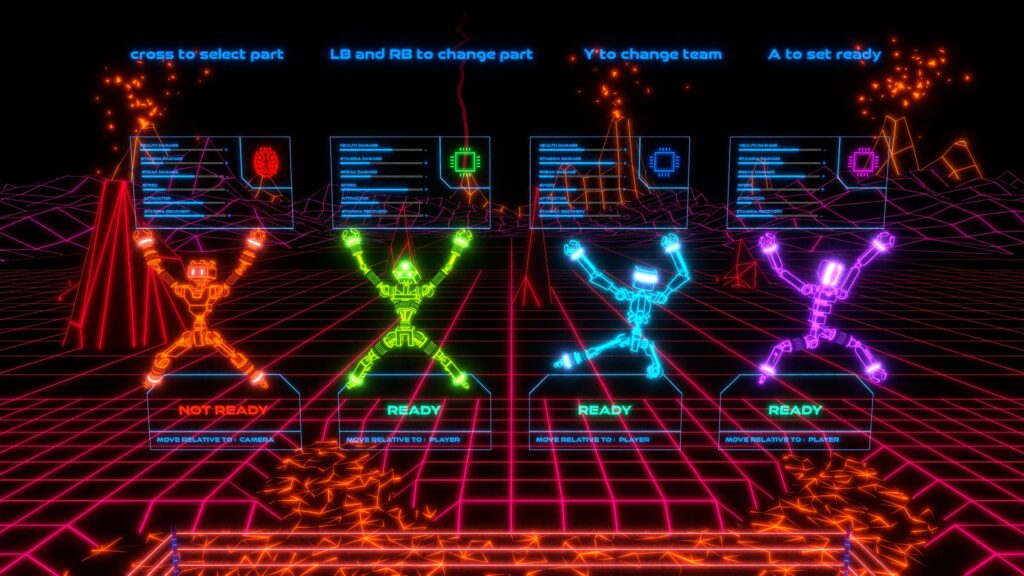 Before jumping into a match, you can customize your robot by choosing the right set of parts to match either your min-maxing urges or simply your inner aesthetician.

Input Chaos can be bought for 9.99USD on itch.io. There is also a free demo with time limits on death match that contains a good snapshot of the main game and you should check before buying it. Aside from a practice mode with built-in tutorial, the game offers only a vs. AI mode and a local multiplayer mode (up to 4 players). The developer’s twitter profile can be found here, while this is the official website.

Special thanks to XyberKnight for retweeting this game, allowing me to actually find out about it!