This article should be part of my ongoing “Indie Fighting Game Thursday” review/retrospective series, now on supercombo.gg… but, you know, things are a bit weird today, because… huh, is this even a fighting game? In my opinion yes, so prepare for an unusual article about a weird gem of an arcade game called “Buck Up and Drive!”

I swear I’m not drunk, sir!

Okay, first, before we start: No, I have not lost my mind, and yes, I am covering a game which isn’t strictly a fighting game… except it is — borrowing the wise words of Obi Wan Kenobi — from a certain point of view. Thus, after buying it during the Black Friday sales, I decided that this surprise topic would have been perfect for a short article! So, ladies and gentlecars, directly from itch.io, featured on the Yoyo Games blog, it’s time to cover this addictive arcade marvel called “Buck Up and Drive!”!

Rev up your engines, buck up your belt, put on some Eurobeat, turn up your stereo volume, and throw that CARdouken at your opponent! 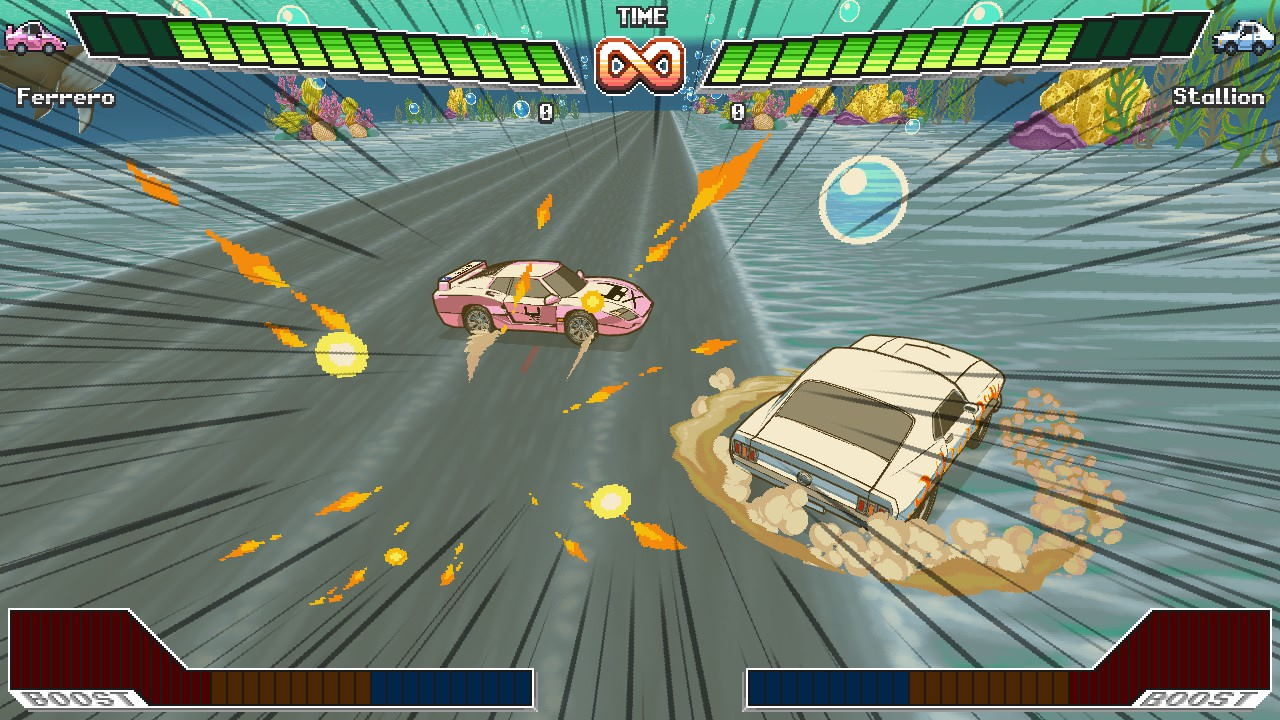 Copyright-friendly cars drifting under the sea.

CARate at its finest

“Buck Up and Drive!” is, at its core, an infinite arcade racing game inspired by classics of the genre like Outrun and Tony Hawk Pro Skaters 2 — wait, huh, I mean… yeah, you have cars grinding on rails and performing skate tricks, jumping on turbo platforms that seem to have directly come out of Crash Team Racing, and battle with police cars in a more violent version of Need For Speed III: Hot Pursuit — all while casually drifting under the sea or on the friggin’ Moon itself and avoiding collisions with trucks and other vehicles.

There is a time limit, there are different courses, there are the sorely missed time extend checkpoints, oasis of respite for all those kids who played these games in the arcades — only to have their quarters eaten before they could get that vital, last time bonus. There are also rivals, that will pop up when a certain score is accrued and will challenge you to a race to whoever reaches the goalpost first.

The game was developed by resident solo madman Fábio Fontes, and it’s a surprisingly well crafted, addictive, high octane racer, with a lot of unlockables and even the possibility to add custom decals to each car.

“But Andrea — one might ask — what has this to do with SuperCombo and with fighting games in general?”

The answer is in the second game mode, aptly called Shifty Gear, which, while still featuring a self-accelerating car, it’s basically a simplified fighting game in itself. Thus, in the vein of staying — at least partially — on topic, this article will delve into the fighting aspect of this game, leaving the arcade racing mode for you to discover. 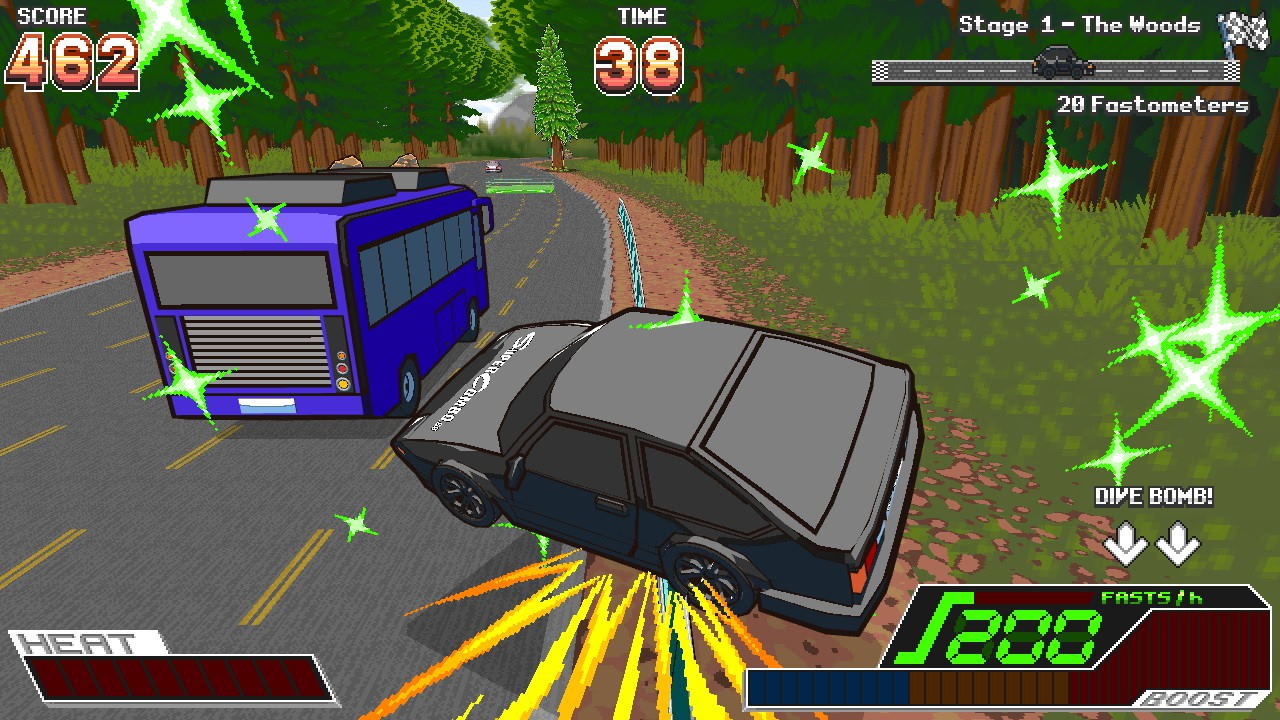 “Buck Up and Drive!” is, overall, pretty simple to pick up and play. After selecting the car model, color and decals, which are all just cosmetic choices, you can choose a timer value and a stage, before entering the fray. The timer is the only setting that has a real effect on the gameplay, but some stages might be more visually grating to fight on, due to aliasing in the tiles at high speed.

Car skins are a nice bonus that can be unlocked by playing the infinite run mode, but they don’t change how the versus fight is played: each car has access to the exact same move set, amount of energy and meter. It’s more of a chance to style on your opponent with a custom, chic decal on your favorite auto model.

Both cars auto-accelerate, but each player can move their own vehicle in the 2D space. Horizontal movement can be controlled directly, while movement along a lane is more limited and circumstantial, depending on the current situation.

The energy bar of each car is segmented in sixteen sections, with each normal attack dealing one damage and specials having higher power or additional effects.

The game uses only four direction buttons and one Drift button, which is the core of every serious attack maneuver. By gently tapping the Drift button, your car will perform a jump, that can be then extended with a side air dash (by tapping left or right twice) or canceled into a dive bomb attack by pressing down plus Drift.

While on the ground, you have access to a wealth of other different options: a sort of vertical flip called Upper Bumper, performed by pressing down, up (it doesn’t count as a proper jump, but can be air-dash canceled), a ramming side dash performed by tapping a direction twice and, last b the special moves. 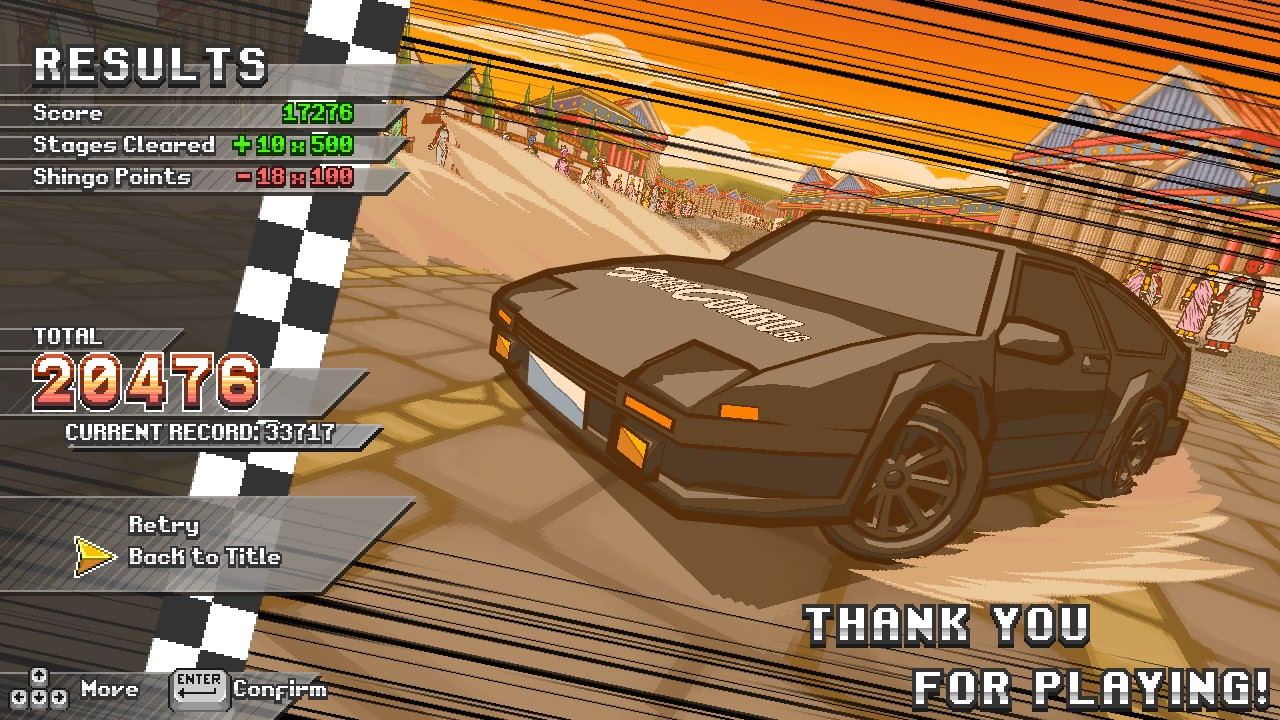 Once I found out there was the possibility to add custom decals, I HAD to do it!

By keeping the Drift button pressed and wiggling left and right, your car will start to drift, filling the boost meter, with up to three stocks. Cars can drift in the air too, after performing a jump or an Upper Bumper, thus making it easier to gain boost at every possible occasion. Notice that the boost meter depletes as soon as you let go of the Drive button, you are hit by the opponent or you perform a special move.

If your boost meter is empty, the only special move you can perform is the Hurricane Drift (a.k.a. the aforementioned Cartsumaki Sempukyaku), a spinning attack that covers a decent amount of space around your vehicle. This move is performed by inputting a quarter circle backwards in relation to the direction your car is drifting.

The Hurrican Drift deals one damage as a baseline, but its reach and power scale up with the amount of available boost. Level 3 Hurrican Drift is a force to be reckoned with, both in terms of hitbox size and damage output.

The second special move is the Boost Tackle, a lounging attack along a lane that needs at least one boost stock to be activated. You can perform it simply by releasing the Drift button with at least one stock of boost meter available. Boost Tackle is a good mobility tool to avoid air attacks and overall decently versatile, but deals only one damage, even at maximum boost level.

The third and last special move is the Peelout Shot, performed by inputting a half circle forward motion in the direction your car is drifting. Peelout Shot is — effectively — a horizontal projectile attack, not dissimilar to a cardouken — huh, I mean hadouken!

Just like Hurricane Drift, Peelout Shot deals damage proportional to the boost meter available while the move was performed. The size and color of the fireball will also be affected by this. 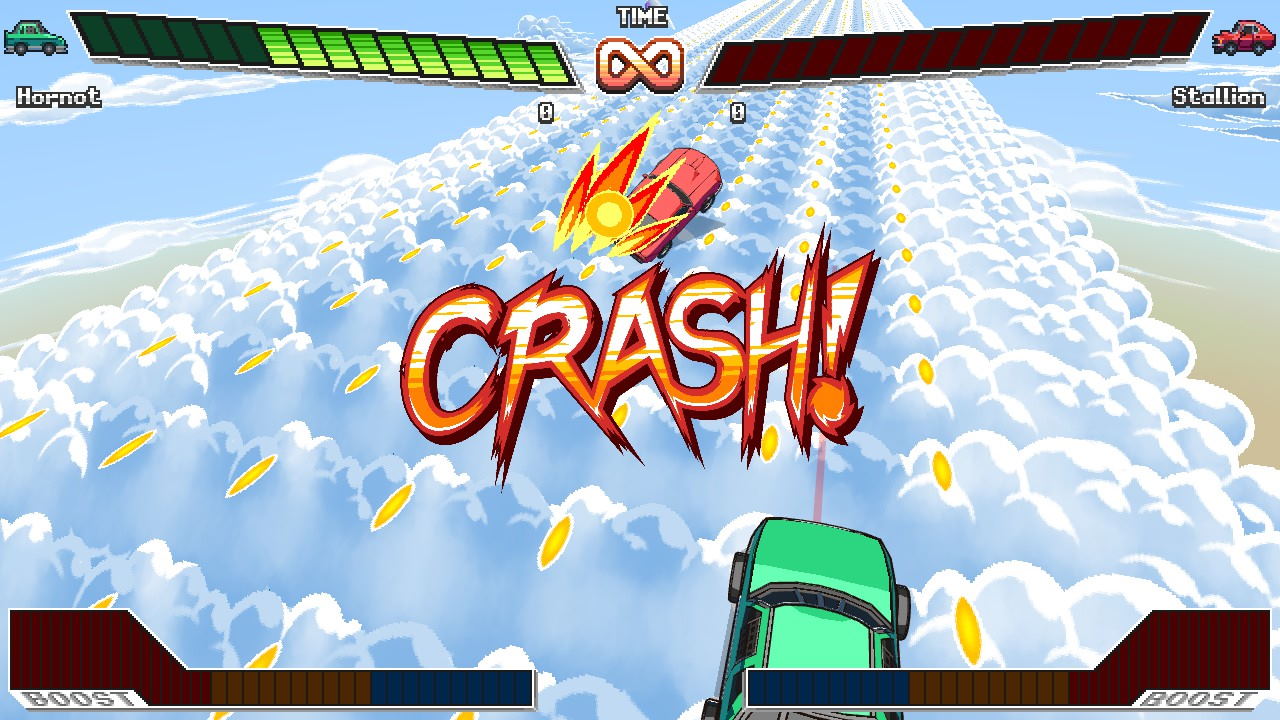 “CARDOUKEN!” “K.O.!” Jokes aside, the sky stage is one of those I would suggest NOT to use in versus mode, as it is visually very distracting, due to how the tiling works.

Is the car a shoto?

I couldn’t properly test if Upper Bumper has invincibility, but seeing how it has both good neutral, a projectile and a spinning attack, I say that, yes, the car of “Buck Up and Drive!” might be categorized as an unorthodox shoto. It feels like the car in the bonus stage of Super Street Fighter 2 decided that being broken down by a karate hobo wasn’t her best life aspiration and went on to become a martial artist herself.

A fighting car is not unheard of  (thanks SEGA), but now we have another valid competitor. 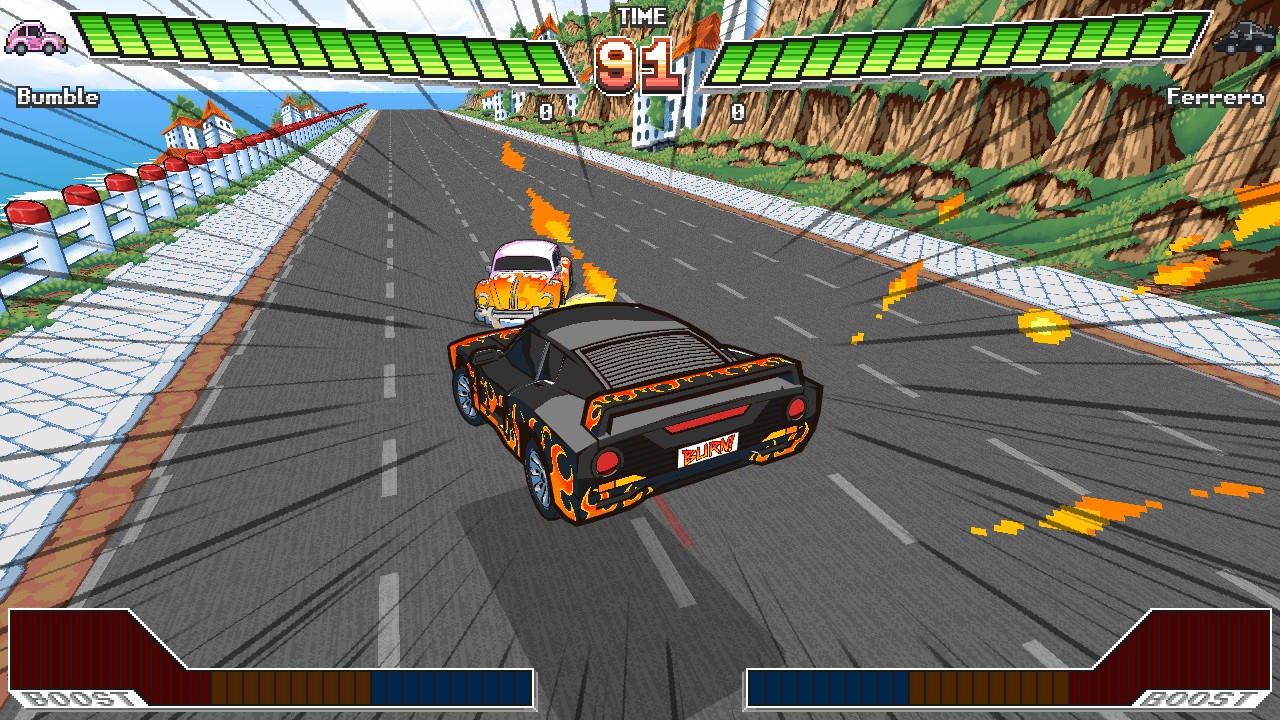 Is this the equivalent of a jump-in into crouching fierce?

“Buck Up and Drive!”‘s Shifty Gear mode can be played against the AI or another player. The AI can be surprisingly nasty, but it’s overall a nice experience even for more casual players. In this side mode, movement is key: there is no block, only evasion. There is no parry, only jump. Choosing when to drift, when to jump, when to boost is instrumental in finding one way’s to victory.

There might be combos too, seeing as some moves leave the opponent in an unactionable hit stun state for a while, but the fast paced automatic lane movement makes it hard to take advantage of it. I could just verify that, if a car is hit by a Peelout Shot, a second one won’t hit them until they are out of hit stun, but more tests might be required to seal the deal.

In terms of time management, if the timer is switched on, the player with most energy left when the clock strikes zero is declared the winner. Winning by clock can be surprisingly common, due to how high the mobility is, so my suggestion is to deactivate the timer for a pure, destruction derby, raw experience.

The graphical aspect of “Buck Up and Drive!” is pretty fascinating: the faux 3D of the stages is engrossing and the different stages add a lot to the overall variety: Thrashing a super car on the Moon is priceless. Due to how the tiling works, however, some stages feel visually clunkier than other (especially The Sky and Polar Cap), which is further exacerbated by how the camera is angled in versus mode, making them less than ideal for a high speed bout among friends. 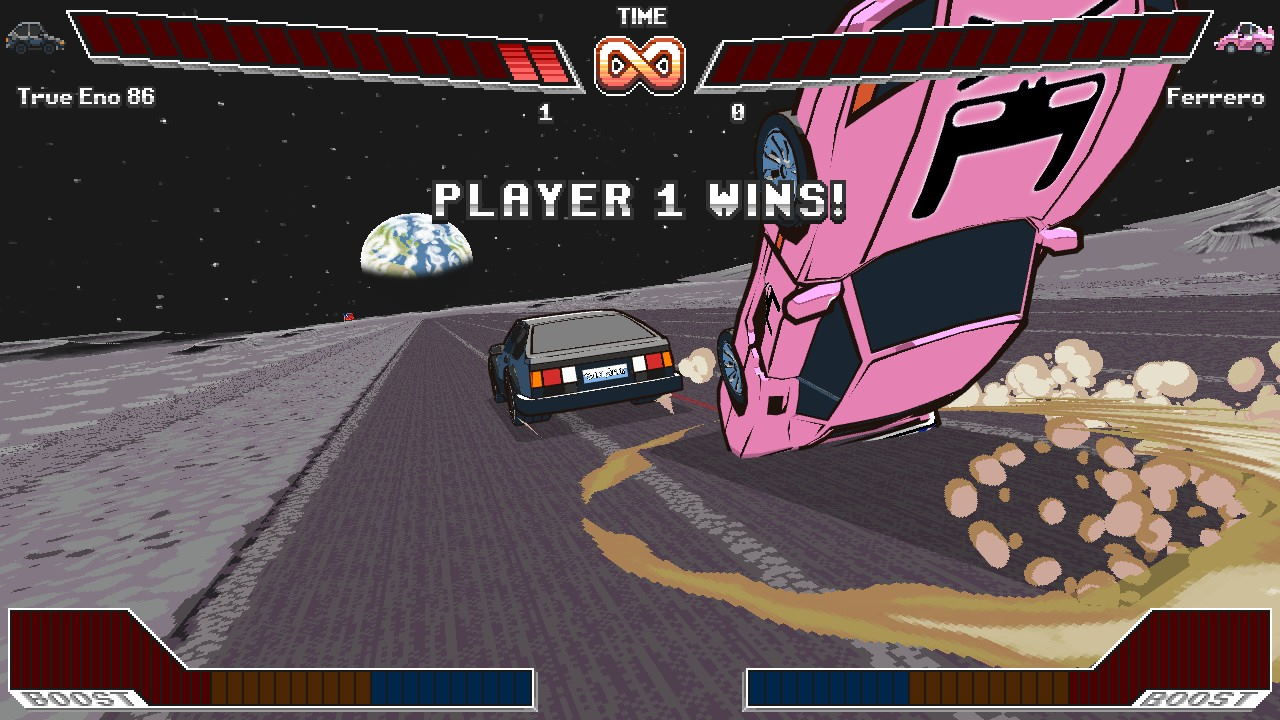 “Everyone can drop an apple: I’ll drop the freakin’ Moon!”

How to play it

“Buck Up and Drive!” is sold on itch.io or Steam at the price of 7.99USD, and includes any future update the game will receive. It has no netcode, but can be played online using middleware like Parsec. The game is addictive, arcade runs are extremely fun (and frustrating, when you lose against a rival in the last ten meters) and I can’t wait to try out the versus mode against some friends, as soon as I can meet them in person!

If this short review didn’t convince you yet, here’s a clip of the game in motion!

I wasn't expecting this mode to be THIS fun! @FontesRanter what have you done? WHY IS IT ADDICTIVE?! [Game: Buck Up and Drive, still on sale on https://t.co/RbgQzZu8kg for the next 4 days!] #gamedev #indiedev #FGC pic.twitter.com/i0pnsvHJp9

Name of the game: Buck Up and Drive!
Developer: Fábio Fontes (Twitter account)
Available on: PC (itch.io, Steam – both Linux and Windows versions available)
Price: 7.99USD
Year of release: 2021
Engine: GameMaker 2
Netcode: None (Parsec)
Status: Complete, with some bug fixing on the way (version tested: 1.1.0)
In one sentence: A super fast racing arcade game with a surprisingly competent fighting game sidemode that extends the concept of footsies to illegal races.