This article is part of my ongoing “Indie Fighting Game Thursday” review/retrospective series, now on supercombo.gg! This week we talk about Two Strikes, an early access fighting game with an old samurai movie aesthetic, where every strike can be the last!

“A Hokusai view of mount Fuji, when darkness falls, at the sound of ceremonial bells. Two shadowy silhouettes, at the opposite sides of a bridge, staring in contemplation. Weapons drawn, the shimmering reflection of the moonlight on the cold steel, stained by the blood of countless enemies. No steps, no words, just long breaths, contemplation. A single cherry blossom touches the wooden planks, carried by the wind. Blades drawn, in a macabre dance, eyes interlocking, silence falls.

One second later, the fight is over.

A samurai will see the light of the day. A disfigured corpse is what’s left of her opponent.”

If this sounded a bit like a scene from an old samurai movie… well, this is exactly what we are going to talk about today! Ready your katana, polish your kunais, because we are riding to feudal Japan to meet our fate at the hand of one of six different assassins: Welcome to the merciless world of Two Strikes, a game made by the three-men development studio Retro Reactor and currently available in early access on Steam! 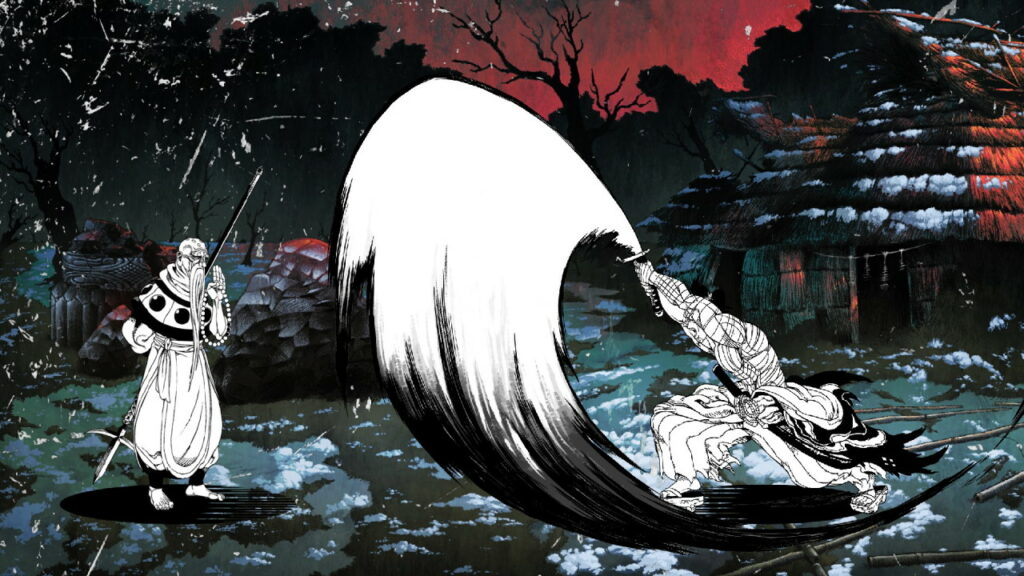 Welcome to feudal Japan. I hope you have got insurance against big sword slashes.

Two Strikes is a very stylish game. Since the very moment I saw that title screen for the first time, I had the feeling I was playing something special. The character selection screen alone oozes style from every pore, making me ask myself if, by chance, I ended up in some sort of obscure cinema, showing a remake of a Kurosawa movie made by Tarantino. The atmosphere, the music, the limited palette… every single element of its presentation recalls a slow, honorable duel to the death, in which every misstep can mean defeat.

At its core, Two Strikes is a brutal, yet satisfying game. Every character can perform five different actions: light attack, heavy attack, parry, forward dash and backward dash . There is no jump or crouch, and there is no guard at all: either parry or die, no in-between.

There is no timer, no life bars or any semblance of HUD either: The experience is just a pure, visceral fight between two opponents. 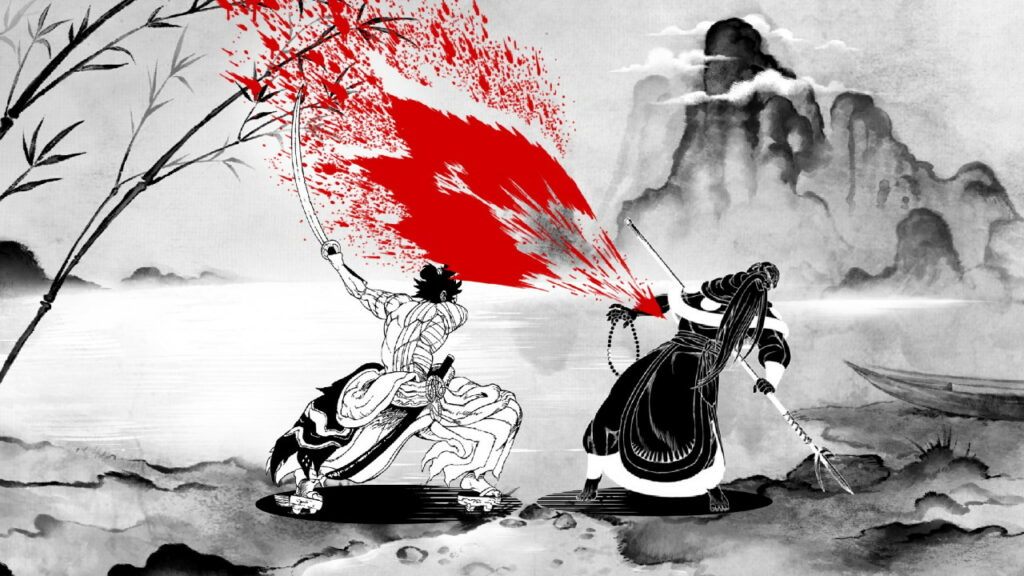 The curtain falls on Hozoin’s life. All that’s left is a shower of hemoglobin.

The name of the game is pretty deceiving, all things considered: One successful heavy attack will seal the match. However, in contrast to Retro Reactor’s previous game, you will need the titular two strikes, if you connect with a light attack. Heavy attacks tend to be extremely disadvantageous on parry and performing one at the wrong moment can spell doom. Light attacks are safer, but will force you to engage in more interactions in order to snatch a victory.

To make matters more interesting, the startup of both light and heavy attacks can be dash-canceled, thus allowing for feints and mind games, during the long wind-up of the hardest hitting moves.

There are no special moves and no motion inputs: All you need to do is moving your character, choose your strategy, use dashes with care and try to make your opponent fall for your feint. 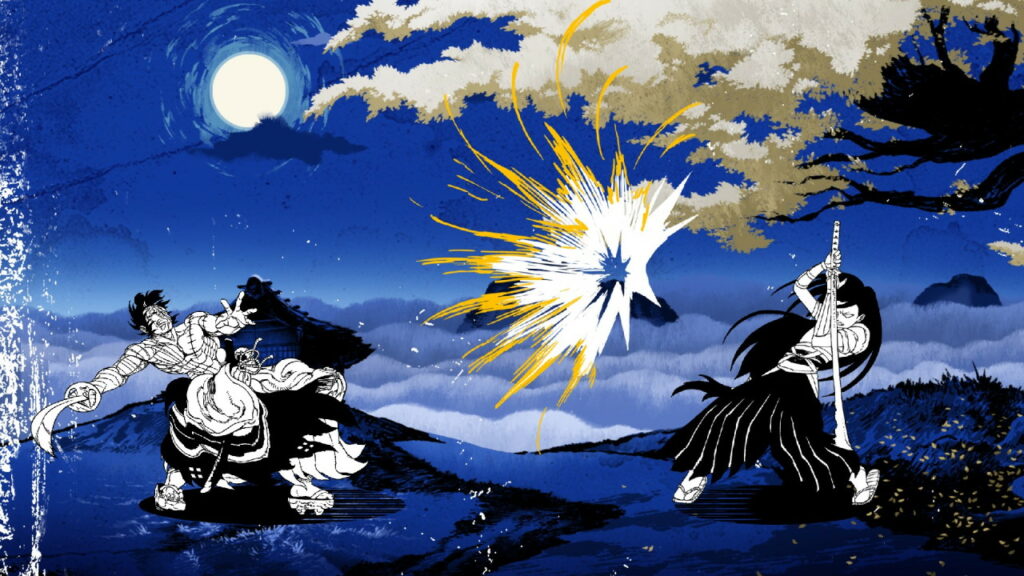 Parries have usually a spectacular knockback on heavy attacks, much like in the Samurai Shodown series, causing the attacker to be abysmally minus on block. However, Kenji breaks this rule, as his heavy slash is safe even when parried.

Among the titular six characters, only four are currently available in the early access version of the game (as of February 2022): The scarred samurai Kenji, the nimble assassin Tomoe, the old monk Hozoin, and the deceitful ninja Goemon. Each of the four characters has a different gimmick that affects their fighting style. Tomoe excels at mid range, with a very unsafe leaping heavy strike and a two-hit light attack, which has a relatively fast wind-up, is a frame trap on hit and forces the opponent to parry, unless they want to lose a round; Hozoin has very far reaching light attacks, but can’t dash forward — instead, he has an additional regular attack he can cancel both his light and heavy strikes into; Goemon cannot dash backwards, but will instead cover himself in a thick cloud of smoke, obscuring his movement and kunai throws from the opponent’s view. The cloud of smoke will also trigger on a successfully parry; Kenji has an access to an unpunishable heavy strike that seems to be neutral on parry and has access to a very fast light attack that is very hard to punish — you don’t want to stand near him.

Even with just four characters, every match up seems like a different game. For example, fighting Kenji with Tomoe is extremely hard, because the latter will almost always have advantage, even when his attacks are parried. This is due to Tomoe’s light attack being only slightly faster than his, making it risky to push your offence even after successfully fending off Kenji up close. Au contraire, against Hozoin and Goemon she can play a more active match, due to her very good reach and relatively good speed.

There isn’t much of a plot revolving around the characters, for now, but from scattered pieces of information hidden in plain sight in the menus, we can hypothesize that all six of them have died and they are fighting in the afterlife at the behest of a vengeful shinigami. I don’t know if it is a correct interpretation, and I guess we will learn more as time goes on! 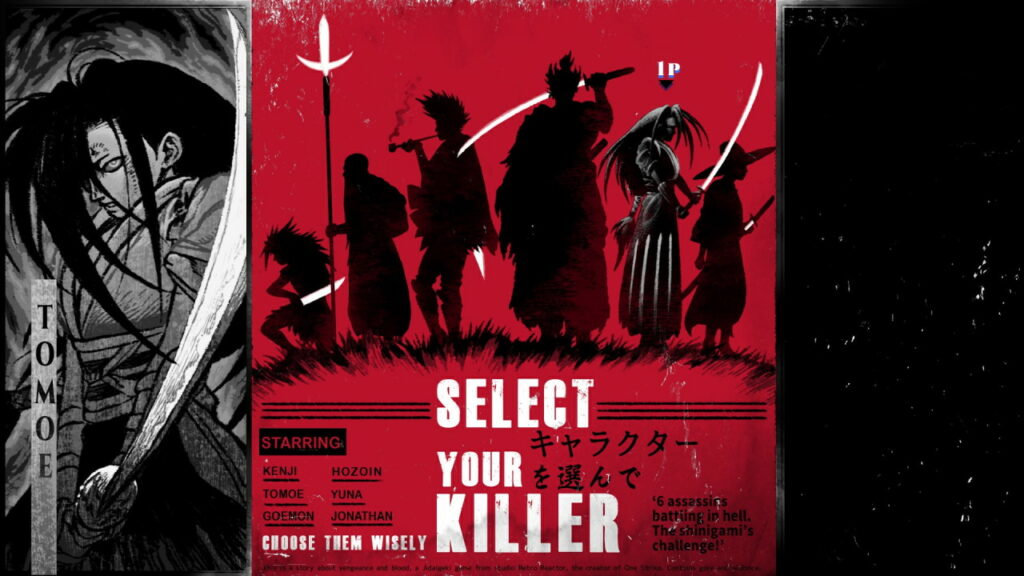 The character selection screen seems directly out of a movie theater, to the point where it shows the characters’ names as those of the cast of this hypothetical film.

One thing that I found very interesting is that a match must be won with at least a two points difference. If, by chance, both players reach a tie, new rounds will be played until one gets two consecutive wins in a row, much like in Tennis. This means that, potentially, a match could go on forever and ever. The absence of a timer also means that stalling strategies might be effective in making the opponent lose patience, but I’m not sure how viable they would be, while playing against a different opponent.

I have personally been left a bit confused by the fact that one can go back to the main menu only between rounds, but at least the art is very pretty. 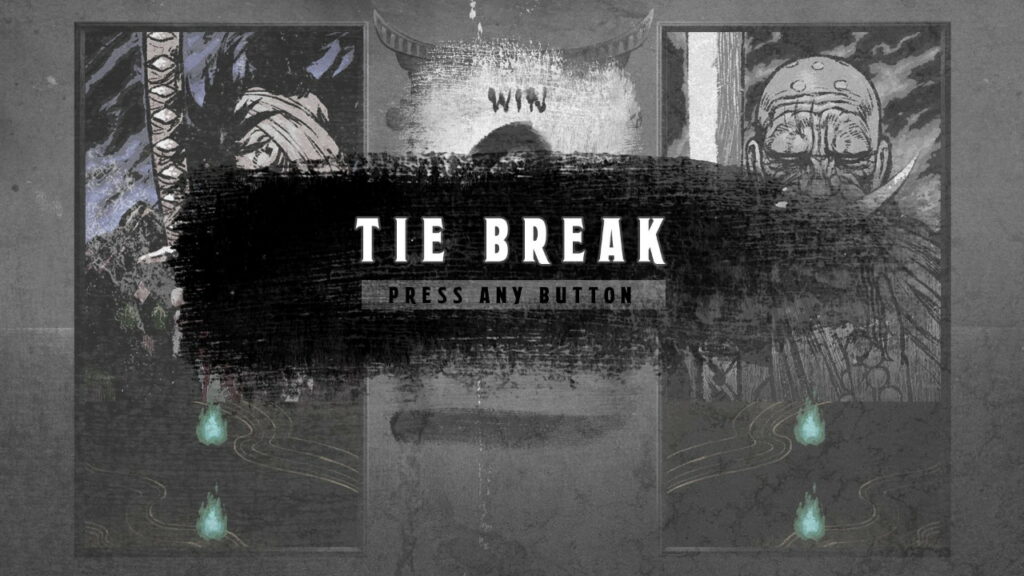 When a match ends with both characters at the match point, a tie-break rules comes into place: basically, in order to win the match, either character must win two rounds in a row. If the opponent snatches one round, it falls back to the tie break point. It is a very interesting idea, but can be a little bit frustrating to deal with at times, especially because there is seemingly no limit to the number of tie breaks.

Two Strikes offers a modicum of single player modes, including a standard arcade and a one-round-kill run. These two modes come with a caveat: the Retry option will actually restart the arcade run from the beginning, forcing you to go through all opponents you had beaten until then again. Once the last match is over, there is (currently) no special arcade boss and no ending art, but this is somehow expected from a game at this stage of development.

The AI is decently challenging. Due to the nature of the game, one mistake can spell doom, and the computer will make sure that you know he can not only spell “d o o m”, but also write it while blindfolded. This was mostly evident when fighting against Kenji, who caused me to utter some very non-samurai-compliant swearwords.

On the multiplayer side, we have a standard local versus and a team mode, much like a The King of Fighters game. In the current build there is no online support, nor a way to remap the controls. I had to spend a bit of time to understand that on keyboard the confirmation button for player 1 is the spacebar, while it’s Enter for player 2, because this information is not shared in the controls menu.

I have also found a pretty funny bug in arcade mode: the AI-controlled Hozoin can’t block Tomoe’s heavy slash without dying. Even if the parry animation will properly play, Hozoin will die in any case, as if he was struck by his opponent. This bug has been confirmed to work only against the AI and is current as of February 2022, which means that things might be already been fixed as you are reading this article.

Despite all the small imperfections, I would honestly suggest giving this game a shot, as it has that feeling of “duel to the death” that only Bushido Blade and early Samurai Showdown games awakened in me up until today. 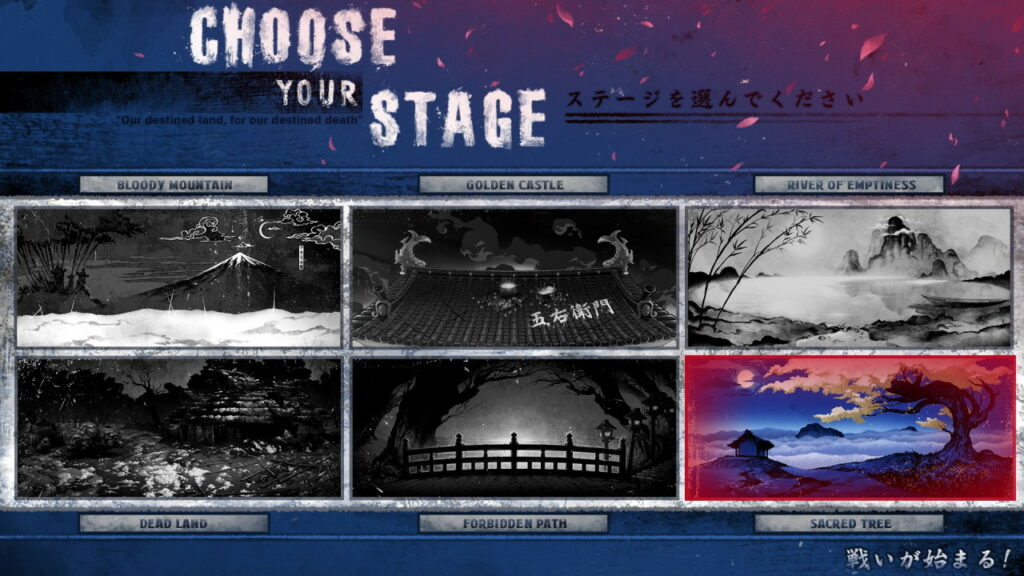 The early access version features six stages, each of which beautiful in its own right. If there is something this game nails in full, is the presentation.

Two Strikes is currently sold on Steam for 8.99€/10.99USD. The developers have both a Twitter account and an official website for the game. Since there is no online yet, your best bet to play against friends around the globe is either Steam Remote Play Together or Parsec.

The developer Retro Reactor shared on Twitter that the number of planned characters is now eight instead of six and that a fix for the Hozoin bug reported in this article is already in the works.

This bug it’s in the backlog to be fixed! Another good news is that we are actually working to have 8 characters for the 1.0 release!

Name of the game: Two Strikes
Developer: Retro Reactor (Twitter account, official website)
Available on: PC Windows (Steam)
Price: 8.99€/10.99USD
Year of release: 2021
Engine: Unity
Netcode: None (Parsec)
Status: Early access
In one sentence: A dance of death between two warring souls, waiting for the cherry blossoms to fall on a bloodstained bridge. One strike is all you need to win, and let the opponent embrace death.