This article is part of my ongoing “Indie Fighting Game Thursday” review/retrospective series, now on supercombo.gg! This week we talk about Super Bout: Champion’s Tour, a retro 2D fighting game that plays like a 3D fighting game, with short combos, ring out and tight juggles.

I owe this game an apology. After writing more than 30 articles since last August to this date, I am starting to lose grip of how many indie fighters are actually being released, even after putting together an impressive list of them. So, when Super Bout: Champion’s Tour was published on Steam in September 2021, my lazy brain took a mental note to check it later and… quickly forgot about it.

But, since serendipity is a nasty piece of work (right, HYPERFIGHT?), a seemingly uncorrelated event pushed this game back on my radar. During a discussion in MrMKL‘s Discord server about complexity in fighting games, I have started putting together a Tiermaker page with many indie fighting game logos, in order to offer a tool to go forward with the discussion. This prompted Discord user SuperHC to send me the logo of Super Bout: Champion’s Tour. This triggered my curiosity, making me go back to the list to finally try out the game.

Whatever I thought while booting up the game, though, I wasn’t expecting to find myself face to face with a competently made, full-blown, glorious, 2D 8-bit Virtua Fighter. 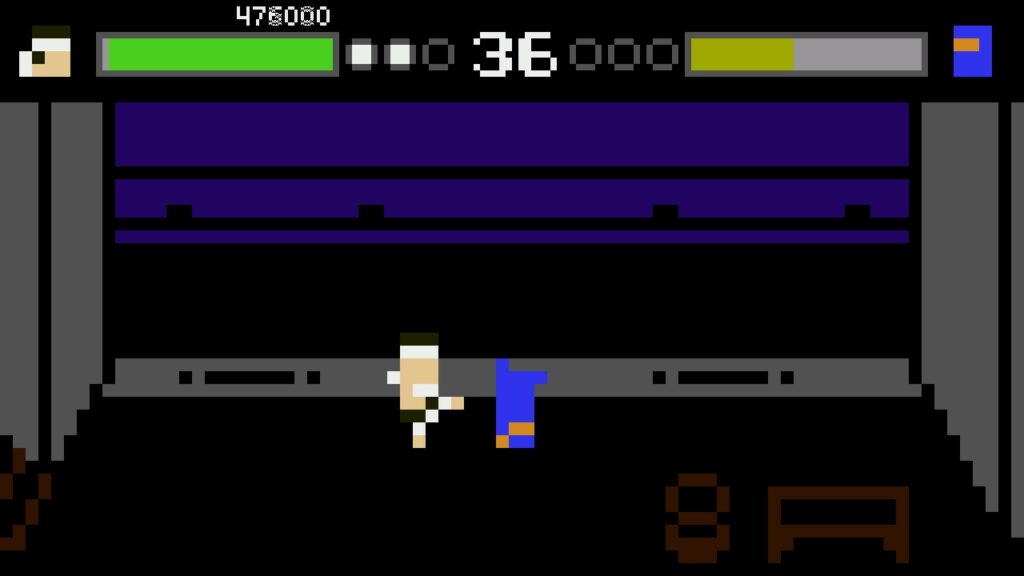 Headband vs Ninja at a train station. Strong Virtua Fighter 3 vibes here, but fortunately no intercity express ring out (at least, not in this stage).

Three buttons is all you need

I’m not even joking: This game feels like a legitimate 3D fighter experience but flattened on a surface, down to its control system (Punch, Kick, Guard), the methodical spacing, emphasis on getting frame advantage and on juggling the opponent for large damage. Grabs are performed by pressing Punch and Guard together, while Punch plus Kick and Guard plus Kick give access to additional attacks, depending on the character.

All characters have access to some special moves of sort, usually performed with a quarter circle or a dragon punch motion.

There are very few links, most of which on counter attack, and low attacks are a luxury, more than the rule—useful for getting out of a pinch or having some decent frame advantage, but generally incapable of starting combos, except for a few outliers.

Backdash and forward dash allow for a very crisp movement, while the presence of a guard button forces the player to play in a more methodical way, as holding back won’t block any incoming attack. 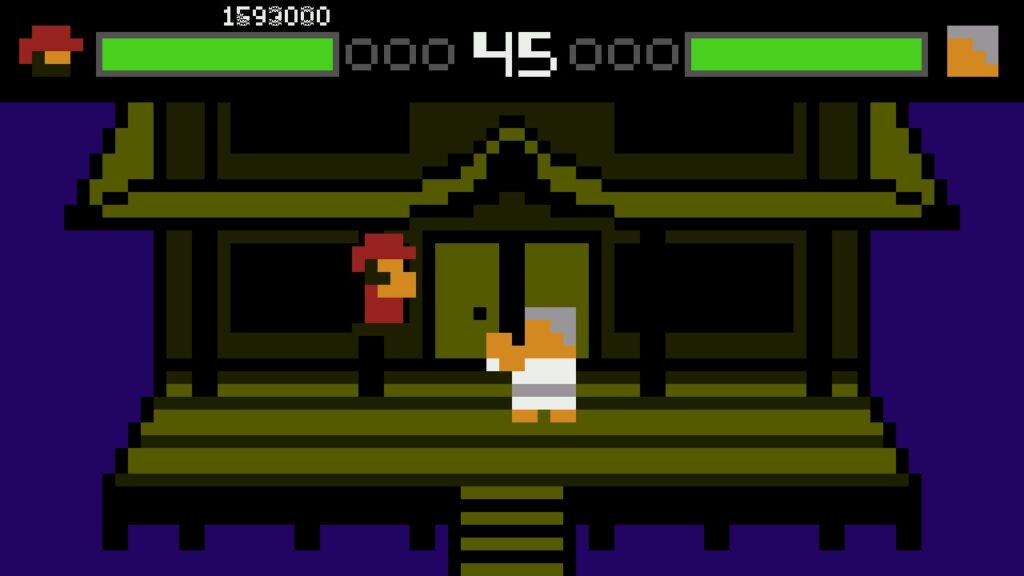 The arcade boss cannot be unlocked in the current build. he surely can pack a punch or two, though.

Something not very common in 2D fighting games, except maybe in the Fatal Fury series, Super Bout: Champion’s Tour features several stages with ring out options: Instead of simply pushing your opponent to the corner, you can win a round by throwing them out of the stage proper, winning independently on the amount of health left. This might sound cheap, but it’s incredibly funny to see someone just fall out of the stage for a mistimed recovery roll. 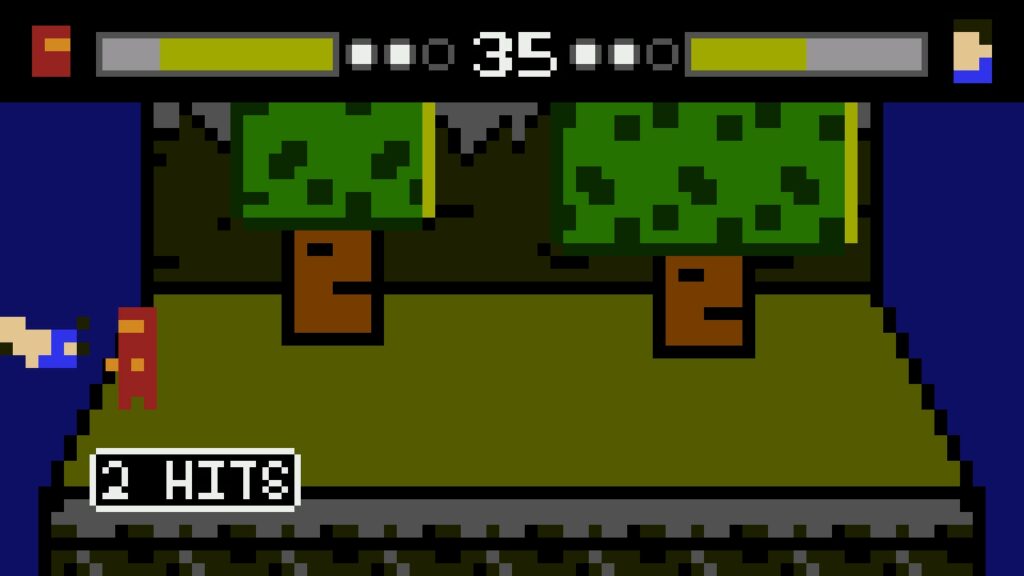 Ringing out the opponent with a juggle can be infuriatingly satisfying.

The best way to perform combos in Super Bout: Champion’s Tour is to hit your opponent with a very punishable launcher, send them flying and hitting them before they fall back to the ground. Contrary to most 2D fighting games, if the opponent doesn’t recover in time, they can be hit while on the ground and—in certain cases—even re-juggled for additional damage.

Fortunately, if one pushes the Guard button as they touch the mat, their character will quickly get back on their feet, avoiding additional punishment. Teching can be the difference between being one touched to death and receiving only a couple points of damage. 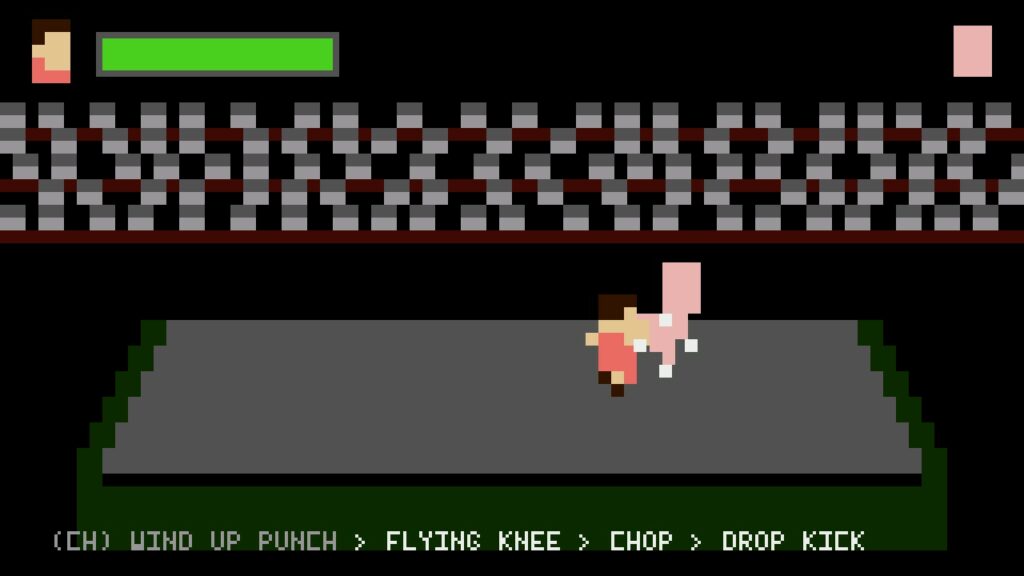 Super Bout has a very complete Trial mode, with 8 sample combos per character. In the build I’ve tested (v731), some moves weren’t properly listed in the command list, like Headband’s step knee. I needed to ask members of the community for help, but I was told this will be fixed soon.

Defense, where art thou?

As defensive mechanics go, together with backward and forward recovery roll while grounded, there are also recovery attacks, like in Tekken or Dead or Alive, which can be used to fend off an aggressor but are fairly punishable on block.

Something more akin to 2D fighting game can be found in its “Dodge” mechanic: by quickly tapping down in sync with an opponent attack, your character will recover immediately with a green flash and be able to retaliate. However, if the dodge is mistimed, the character will instead enter an unactionable recovery phase, where every opponent attack is considered as a counter hit.

Since counter hit moves can lead to pretty damaging combos, it’s best to hedge one’s situation before going for a dodge, but it’s nonetheless a nice addition to spice up defensive play. 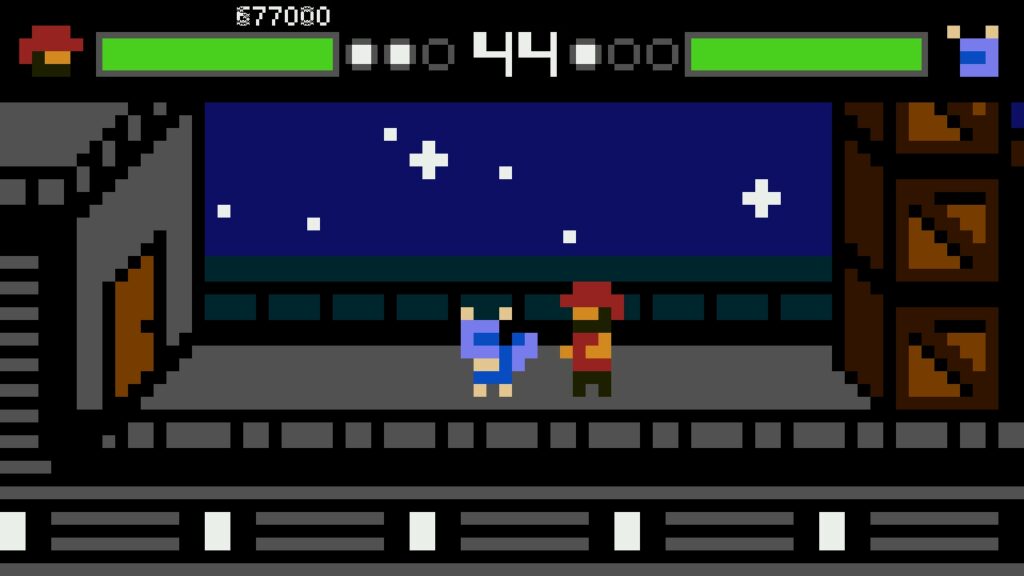 Even with such a limited art style, some stages can be gorgeous.

A cast of functions

This might be my only gripe with Super Bout: Champion’s Tour: The cast of characters seems to exist as generic functions or concepts, more than fleshed out characters. The six playable members of the roster do not even have names in the character selection screen. To learn them, I had to clear Trial mode or Arcade mode and look at the Steam achievements. Which is frankly a shame, because each one plays in a very different way and it would have been nice to give them a bit more context.

You have the most Virtua-Fighter-ish character, Headband, who has access to a back-turned stance, Akira’s tetsuzanko and Jacky’s notorious flip kick. Cowboy, who brings a gun to a fist fight and has a shoryuken, plus a roundhouse kick and some small overlap with Headband. Wrestler is the grappler of the bunch, with a command run into lariat, drop kicks and attacks that can combo into his grab. Crab is the oddball of the group with a sort of rekka target combo and a pincher attack that works both as an anti-air and as a grab confirm tool. Monkey, a literal monkey, with access to one of the few low combo starters in the game and surprising juggle potential. Ninja, your standard Kage-y character, with a dash knee launcher and a slow-ish teleport.

The arcade boss character isn’t unlockable (yet), but could be added when the 1.0 version of the game launches. 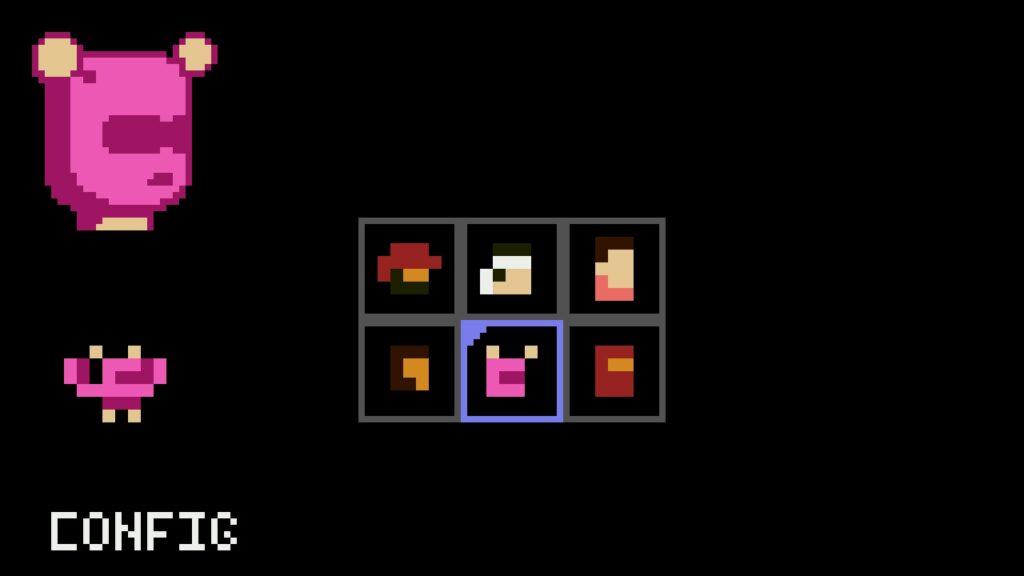 The character selection screen. From left to right: (top row) Cowboy, Headband, Wrestler (bottom row) Monkey, Crab, Ninja. My only gripe with this game is that not much work is spent in presenting the characters (yet), with their names being absent from the selection screen too. This might change in a future build.

Quite a bit of content—and rollback netcode

For being an early access game, Super Bout: Champion’s Tour already offers a competent package. Aside from local multiplayer and online versus, powered by serviceable rollback netcode, there is a training mode with full access to frame data, an arcade mode with a final boss and a bonus stage, and a combo trial mode.

The AI is quite competent and very nasty at times. The character that gave me most trouble was Cowboy, whom I immediately rechristened “Chuck Norris” due to his tendency to spin kick me during my arcade run and his (probably, only in my mind) resemblance to the one Walker Texas Ranger.

There is still some missing background music (especially noticeable in the bonus stage and in the boss stage), but the game is already in a more than enjoyable state and worth more than the measly 1,99USD price it’s sold at.

The only minor bug I have found is that, as of version 731, some moves are not listed among the commands, for example Headband’s Step Knee attack (quarter circle forward Kick). This will however be fixed in a coming release. 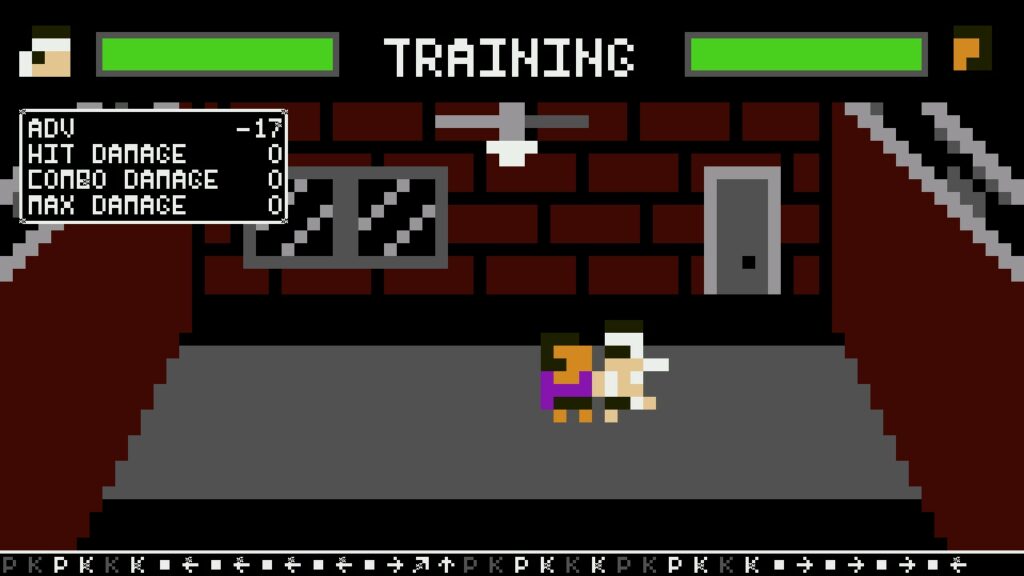 BEHOLD! A training mode with frame data! In a game that costs less than Tekken 7’s frame data DLC!

Super Bout: Champion’s Tour is available for purchase on Steam for the price of 1.99USD/1.59EUR. The game has an official Discord server too, where one can ask for support or look for matches, thanks to the game’s built-in rollback netcode. You can also follow the developer on Twitter for additional updates.

Special thanks to Discord users YellowSlotCar and SuperHC for having made me aware of this game, and specifically to SuperHC for helping me with finding some missing moves in trial mode, explaining some of the game mechanics and acting as a consultant for this article.