This article is part of my ongoing “Indie Fighting Game Thursday” review/retrospective series, now on supercombo.gg! This week we talk about Battle Craze!!, a free game made with the Ikemen GO engine that defied all my expectations in terms of creativity and craziness.

The importance of having a giant mutant beetle in your roster

I am a casual/intermediate player at heart and play most fighting games because of the coolness factor first, with the competitive viability coming waaaay later down the line. Even if graphics aren’t what drives me towards or away from a specific game, character designs are.

I have bought several games on impulse just because I was interested in playing exactly one or two characters—Merkava sold me Under Night In-Birth, Nightmare and Voldo were my gateway into Soulcalibur 2, King was the literal reason why I started playing Tekken, Percival and Zeta awakened my interest for Granblue Fantasy Versus, Abigail and Sakura convinced me to give a chance to Street Fighter V.

This trait is so ingrained in my psyche that sometimes I unconsciously tend to gloss over or “leave for later” games that have incredibly interesting and refined mechanics but don’t have (yet) one character whose design “clicks” with me. Battle Craze!! was an example of this category—a game I’ve always wanted to spend more time with, but where I couldn’t find a character that appealed to me.

Until I saw him.

Goliath. A giant mutant beetle, who gained sentience and human-like intelligence thanks to the acid rains that ravaged the UK in the Battle Craze!! world. A walking, armored, chitinous electric sumo machine of destruction.

Thanks to him, I finally decided to give this game a fair chance. And, oh boy, I should have done it waaaaay before. 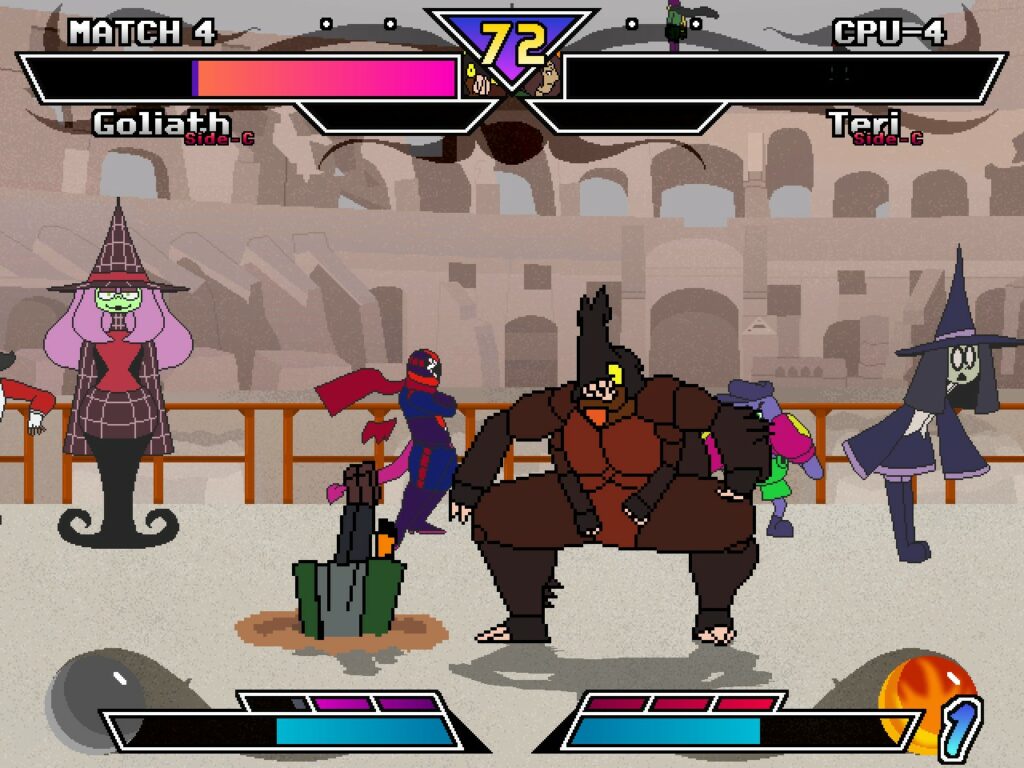 A giant beetle with electric attacks and a charge gauge that can shove the opponent into the ground if he wins with a grab. What’s not to love about him?

From the depths of the Ikemen vault

This is not the first time I cover a game made with the Ikemen GO engine. Previously, I have talked quite a lot about TMNTxJL Turbo and—in an article I still need to port to this venue—the incredible The Black Heart. However, for some inexplicable reasons, Ikemen original IPs tend to be rarer and farther between than those made with that coelacanth called 2D Fighter Maker 2002. This despite Ikemen GO having built-in delay netcode (with the core developers painstakingly working on implementing GGPO as we speak) and being much more flexible in terms of what one can and cannot do with it.

Game developer rant aside, Battle Craze!! uses all the good features Ikemen carries in its toolbox to an astonishing level and—while it doesn’t provide the amount of content TMNTxJL Turbo put on the table—it shows very convincingly what can be done with this engine, and which level of variety can be achieved with it.

The art style of the sprites is relatively simple with no shading, which allowed the developers to pour out so many original characters in this build. However, the key art for victory screens and VS portraits is deliciously stylish. Battle Craze!!’s complementary presentation is just *that* good.

Learn from the classics

The combat system Battle Craze!! lies somewhere in the range between a traditional fighter and an anime fighter, with only certain characters having access to a full cadre of mobility options. As the game was inspired by Chaos Code, there are four buttons—Weak Punch, Weak Kick, Strong Punch, Strong Kick. Pressing both weak buttons at once results in a grab, while pressing both strong buttons together triggers the Craze Technique of each character (similar in concept to Street Fighter V’s V-Skill and BlazBlue’s Drive). Attacks can be freely chained from weak to weak and weak to strong and, in general, both attack strength can be canceled into command normals or specials.

Special moves are performed with the usual motions, while supers require a motion followed by the simultaneous press of both kick buttons or both punch buttons.

All attacks deal both unrecoverable and recoverable (purple) damage, which heals over time, thus rewarding players with good defense.

There are two button macros for grabs and Craze Techniques but—alas!—no button macros for both punches or both kicks at the same time. Even if the input buffer is rather generous for motions, it is unfortunately quite strict when it comes to simultaneous presses, making supers more difficult to input than they should be. 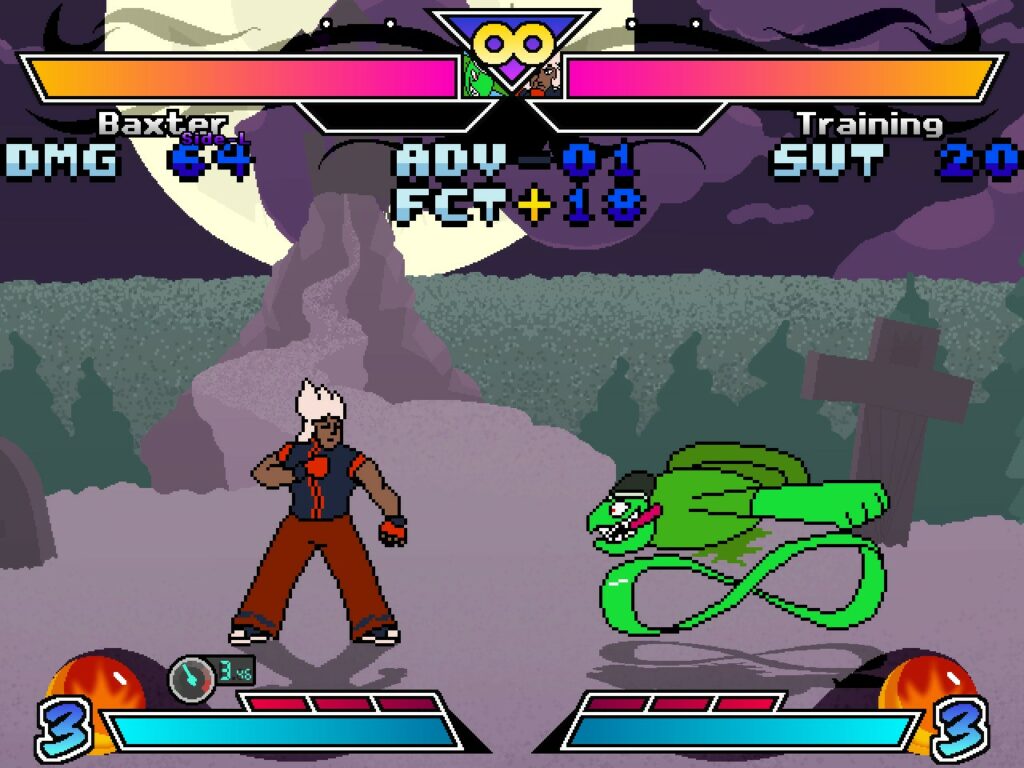 Craze Techniques are wildly different and change a lot between characters —and even among different versions of the same character! For example, Side-L Baxter runs in place like a certain blue porcupine to feed up his speedometer and strengthen his specials. In his Side-C variant, he instead curls in a ball to achieve the same effect, while his Side-S variant receives a boost based on his recoverable purple life left.

Alongside the core system, Battle Craze!! sports some additional advanced mechanics that spice up the experience. For starters, this game implements its own version of Guilty Gear’s own Roman Cancel: By receiving damage from the opponent, you can see a purple bar with three pips filling up at the bottom of the screen. This bar fuels the Craze Cancel, activated by pressing a dedicated button, and has three different use cases:

Another interesting mechanic is the Dire Counter, akin to Street Fighter V’s Crush Counter, which triggers when punishing certain specials or command normals. Dire Counter causes a variety of states, most of which lead to a big, follow-up combo. 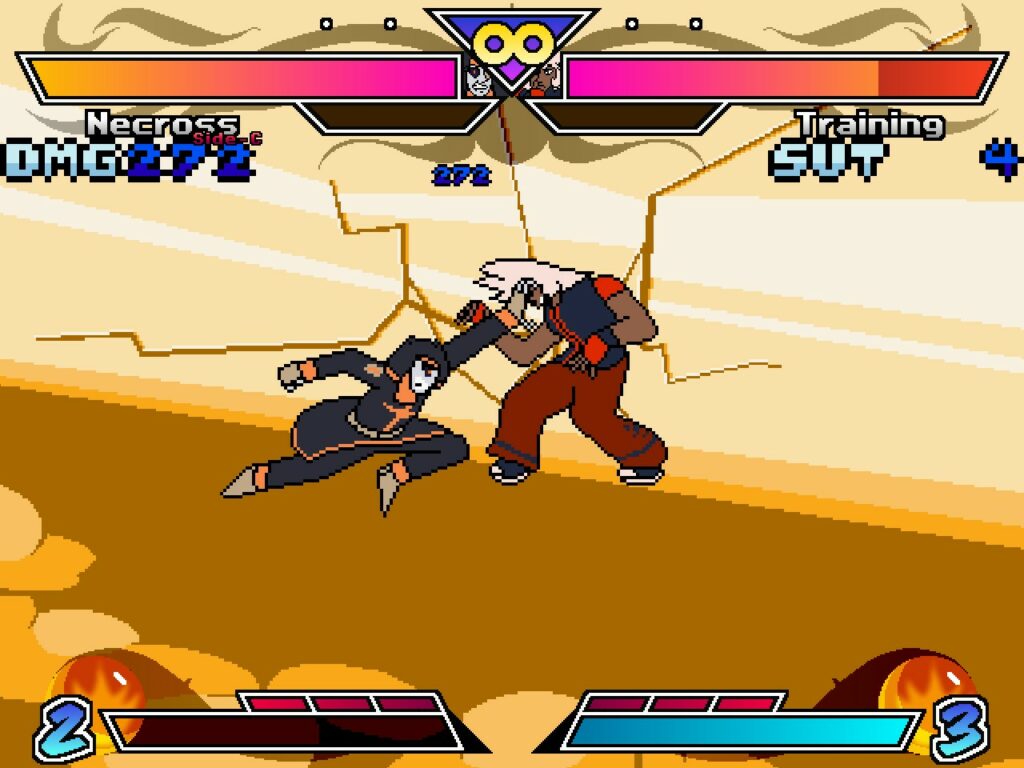 Some super moves have earth-shattering (or, in this case, heaven-shattering) effects.

The most interesting quirk about Battle Craze!! is that (almost) each character has three variants or “Sides”—C, L and S respectively. Choosing a Side isn’t just for show, as it changes the way the character is played significantly. Contrary to games like Melty Blood, Capcom vs SNK and Kyanta 2, the different Sides don’t offer alternative system mechanics. However, they alter the Unique Trait, the Craze Technique, the supers, available special moves and sometimes even normal attacks—some characters switch from using charge specials to using motion specials too!

As an example, C-Side Goliath can hover by pressing up in the air and charges up electricity with time. L-Side Goliath has a command projectile with multiple uses and can store up to two stocks of electric power. S-Side Goliath doesn’t use electricity at all, instead replacing his Craze Technique with a Honda-like Thousand Hands and gaining a mechanic that powers him up the farther the opponent is pushed in the corner.

Some variations offer very over-the-top gimmicks. L-Side Necross, for example, has a unique counter that matches the number of hits of her longest combo and falls to zero if the opponent achieves a longer combo. However, the payoff is great: If L-Necross lands her command grab super, the damage receives a damage buff proportional to this counter, allowing for some deadly setup.

S-Side is usually the most experimental variation, and there’s a reason for it: The original name for S-Side was K-Side (“K” as in “kusoge“—lit. “shitty game”, an affectionate term for weird games with busted mechanics, but not necessarily bad). Some S-Side character reflect this by having an unique “persona” for this style, such as Evil Sherm, QREAPER, and La Tirania. 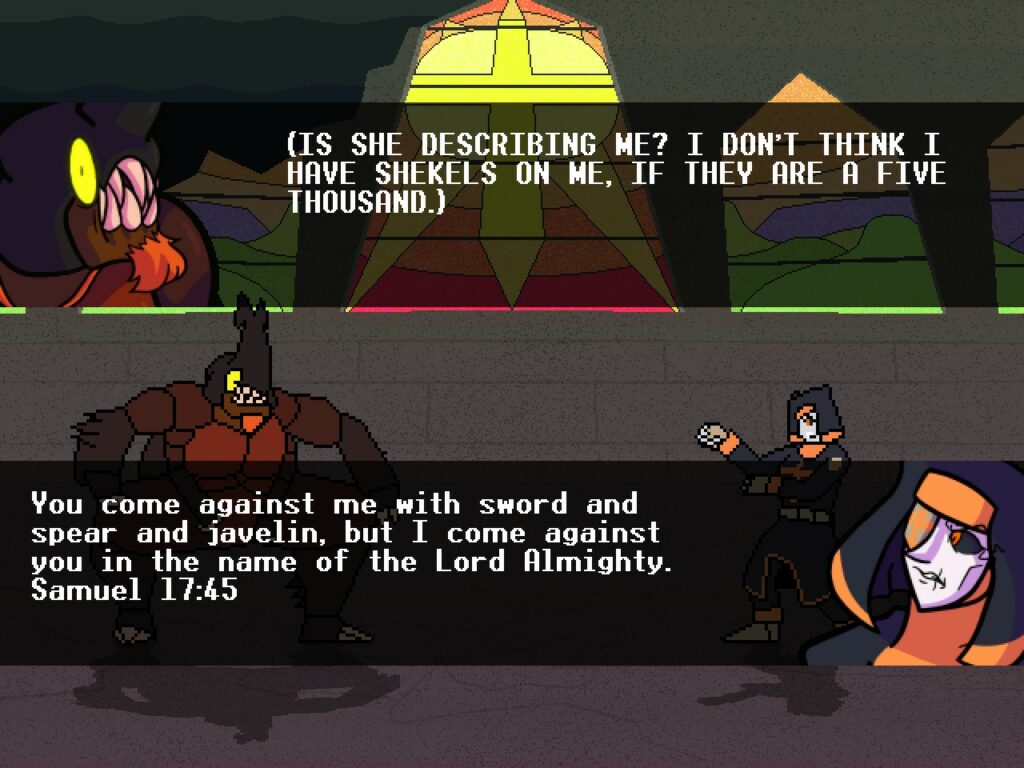 Arcade mode has some narrative woven in-between, resulting in some charming dialogue between characters that you wouldn’t expect to interact with one another.

A queer cast of  weird fellows

Battle Craze!! features (so far) 18 playable characters, with three Sides each (minus Lucy who currently has no S-Side). Since Sides change the way a character is played significantly, this means that one player has potentially access to 53 playstyles, ranging from joke characters with Dan-level taunts like Sherm, to big body juggernauts like Wallace or weirdos like Baxter.

Each character is animated beautifully and looks very good in motion, despite the limited palette. Sherm’s animations, in particular, really sell how much of a goofball he is, not unlike a certain Saikyo-style practitioner.

The art style is pretty distinctive and definitely not for everyone, but undeniably charming. As a minor, related quip, while playable characters are very well animated and have super-expressive sprites, stage background NPCs don’t seem to match the vibe and feel at times out-of-place, but this doesn’t detract too much from the experience. 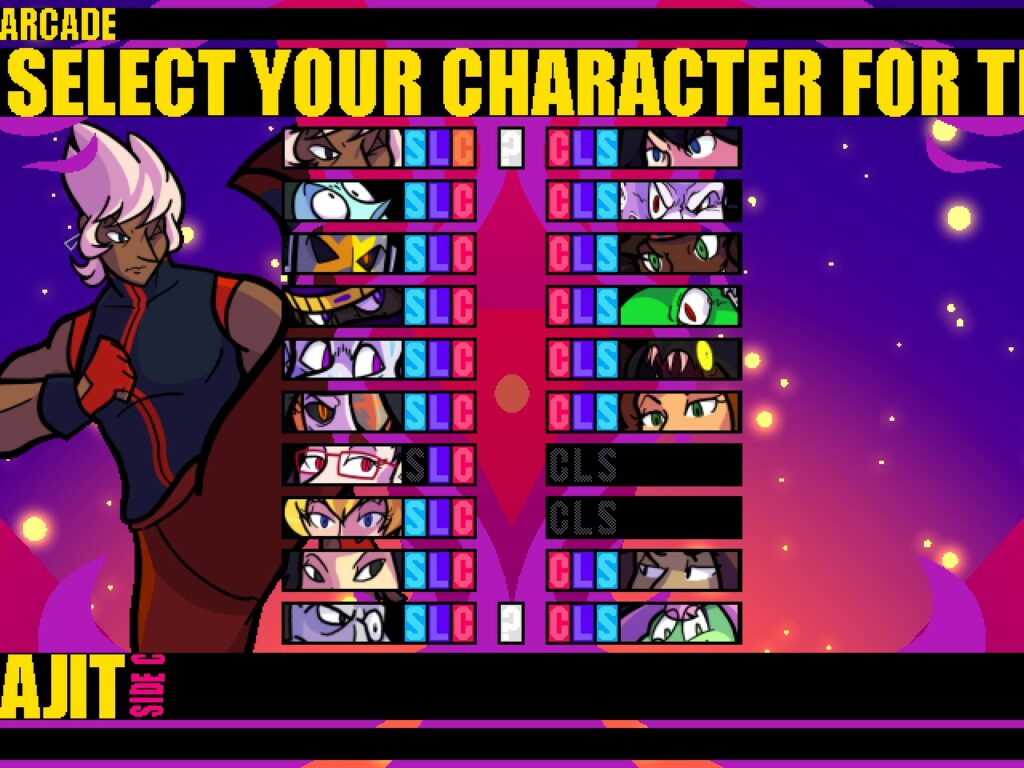 The character selection screen of Battle Craze!! is rather elegant in its simplicity. Much like in Melty Blood, each character is available in 3 “Sides” (C, L, S), which change significantly the way they are played. Some characters are so different between sides that they feel like two completely separated entries, which somehow share some normals and a couple specials.

A small jewel of representation

Battle Craze!! doesn’t shy away from representing a huge chunk of the gender and sexuality spectrum, several different nationalities and ethnicities, and various degrees of autism in its multifaceted cast. The wiki includes more details about each character, but, to offer a short summary, the utmost majority of the cast lands somewhere in the LGBTQ+ spectrum, with a sizable trans representation (Boundary, Ikue and Isabella) completely absent from almost all AAA titles (probably excluding GranBlue Fantasy Versus and Guilty Gear Strive).

A member of the development team, Janis L.C.V., added:

A lot of this came from personal experience, and we did our best to cast characters according to their ethnic background as well as their sexuality, if it called for it. For example, Ikue’s voice actress is an Asian trans woman. 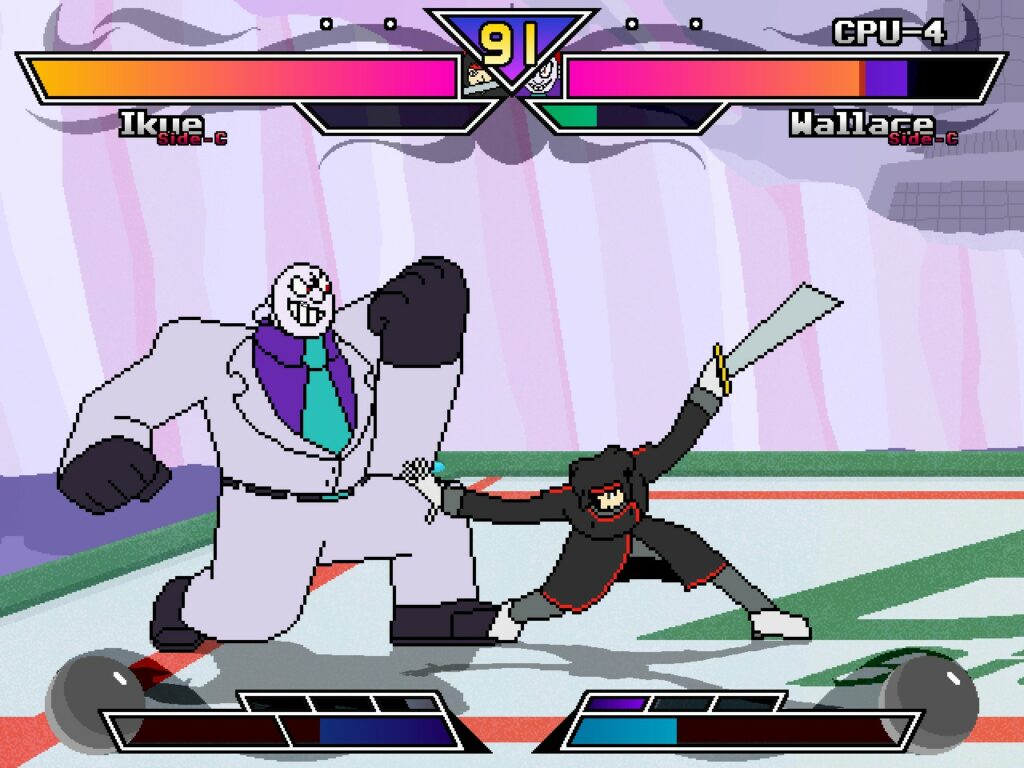 Ikue is one of the three trans characters in the roster. Battle Craze!! represents a huge share of sexualities and gender identities in its colorful roster, something games from major publishers could take example from.

There are several characters still in the works, like the recently revealed dinosaur-dragon-demon Tyrant and the jongleur Gabby. While the game is still in active development, it is already worth checking now, as it has monthly tournaments going on and a rather welcoming community for newcomers to the genre.

Lying dormant for thousands of years after his feud with his brother, one half of the God of Order would observe humanity with interest, and disdain.

Now he awakes, to bring order to the planet through warfare.

The game is available free of charge on the official website. There is also a wiki that explains all game mechanics and character-specific gimmicks, including additional lore. The game also has an official Twitter account that is used to post development updates  and tournament announcements. The game has native delay netcode that requires a direct IP connection or a solution like Radmin VPN or Hamachi to create a virtual local network. As single player content goes, there is a classic arcade mode, local versus, versus AI and team battle. Arcade mode has some intro backstory for every character and dialogues at different points during the run, but lacks proper arcade endings.