This article is part of my ongoing “Indie Fighting Game Thursday” review/retrospective series, now on supercombo.gg! This week we talk about Punch Planet, an early access sci-fi fighting game that has been one of the unsung pioneers of the late 2010s indie fighting game movement!

A beacon of rollback hope

Punch Planet is one of those names that are hard to forget for those madmen like me, who develop fighting games either as a job or as a hobby. This is because it is one of those few fighting games that popped up on PC in 2017, when the Western representation in this genre was still lacking in the indie scene. I’m hard pressed to remember an original IP traditional fighting game released by a Western indie developers between 2010 and 2017, aside from the immortal Skullgirls, the Battle High series on Xbox, the demo of the crazy four-player-mayhem Cerebrawl and the M.U.G.E.N. classics The Black Heart and Fatal Art.

Schwarzerblitz, Beatdown Dungeon and a cadre of other small games would appear soon after, but it’s fair to say Punch Planet was not only one of the most promising indie titles in this time frame, but also the first indie traditional fighting game after Skullgirls to feature one very important quality of life upgrade: Rollback netcode.

Yes, that’s correct: Punch Planet integrated GGPO since 2017, when it was still closed source, making it one of the first rollback-powered, original fighting game IPs.

While Street Fighter V was still struggling with its one-sided rollback woes and Tekken was 3, Punch Planet was already flying on the wings of GGPO. This game deserves a spot of honor in the indie fighting game scene and it’s high time I wrote an article about it for my weekly column! 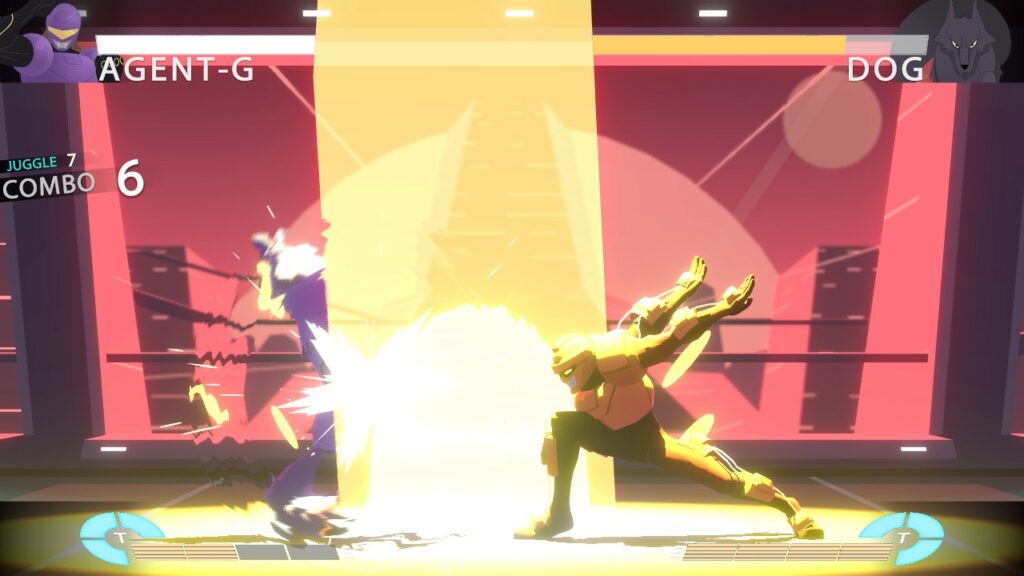 Say what you want, but special effects are rendered very well in this game. Punch Planet might be the best looking indie fighting game currently out there.

In space, nobody can hear you mash

As I am writing these lines, in March 2022, Punch Planet is still in Early Access… but that doesn’t mean it feels unfinished. With eight playable characters, alternate costumes, a more than challenging AI, and online modes, it has quite a lot to offer for a competitive player. The gameplay system is fairly simple: As in Street Fighter, there are six buttons—three kicks and three punches of varying strength; grabs are performed by pushing Light Punch and Light Kick together and are teched in the same way; special moves are performed by means of motion or charge inputs.

The game’s combo system is based on links and special cancels, instead of chains, going for a more Street Fighter 4-ish feeling. Mashing is detrimental and definitely not advised.

As far as universal mechanics go, there is also the usual super meter, which can be used to perform enhanced special moves at the cost of one bar, and super moves, which cost either two bars or four (the full meter a character can get). A full bar super can deplete up to 50% of a lifebar in one go, but you might find it more efficient to use meter for a more varied approach instead of sitting on it. 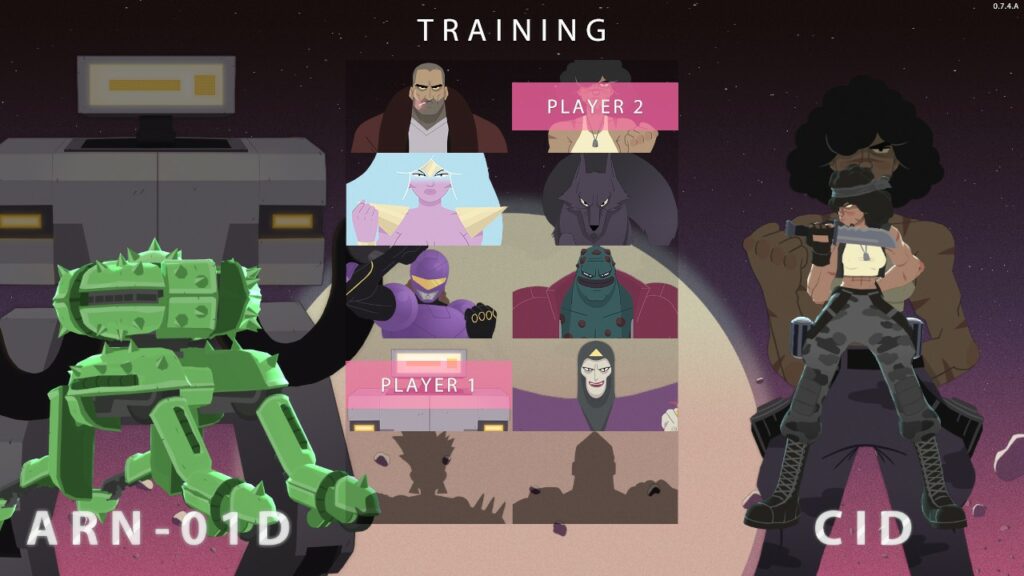 The eight playable characters are all fairly unique, and they also have alternate colors and costumes. ARN-01D as a cactus is a must see.

My time is now!

There is another resource in Punch Planet: A three-stock gauge called Time Meter, which can be used for performing additional actions.

At the cost of some Time Meter, each character has access to a universal overhead that crushes crouching opponents and is performed by pressing Medium Punch and Medium Kick together. By keeping the buttons pressed, the characters can fake the overhead, resulting in a short hop forward instead, for an additional layer of mind games.

By pressing forward plus Medium Punch plus Medium Kick, the character will perform an Absorb Time Cancel (ATC), which is equivalent to a parry, uses up some Time Meter and—much like Street Fighter V’s V-Shift—will cause the opponent’s attack to whiff completely, if correctly timed. A successful ATC will build up Time Meter and will prevent the opponent from canceling the parried attack.

The last use of this resource is the so-called Double Time Cancel (DTC), performed by pushing the same attack button twice in a row, on hit or block. A DTC will use up one stock of Time Meter and immediately cancel the recovery of the previous attack, allowing for making heavy moves safer, to continue the pressure or to chain some combo that would usually be impossible. DTC works only for Medium and Heavy normals, since mashing the Light Punch or Light Kick button will instead result in chaining the same attack over and over. Special moves can be canceled via DTC too, albeit the allowed cancel points may vary between characters.

DTC feels like a mixture between between a Roman Cancel from Guilty Gear and a Focus Attack Dash Cancel from Street Fighter 4, as its usage sits on a happy mid-point among them. DTC is what makes mashing buttons doubly as dangerous, because by pressing the same button over and over you will spend Time Meter by mistake for nothing, thus hampering your chances of winning the match. 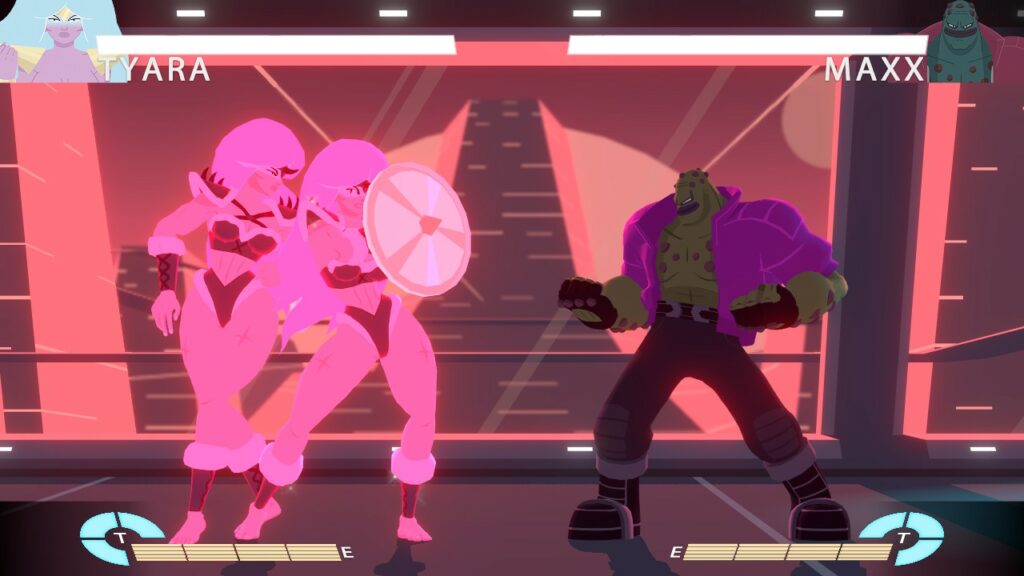 The animation for the Absorb Time Cancel duplicates the character with one afterimage for the duration of the parry. Hitting them while this is active will cause the attack to functionally whiff, opening oneself up for punishment.

There are still two characters planned, but they are not yet available in the current build, as of March 2022. Among the current cast, Roy, ARN-01D and Agent-G have a good arsenal of zoning toos, with ARN-01D being the charge character, Roy having a beam weapon he can hold and feint, and Agent-G being the nearest thing to a shoto this game has. Tyara is a heavy hitting character with armored moves and a 360° motion command grab. Maxx is the charge juggernaut with impressive damage. Dog and Sid are more rushdown-y, with several approach and disruption tools. Gat is a setup and oki monster, with teleports, traps and dive-kicks.

One can taste the sci-fi inspirations in the cast. Agent G seems to come directly out of a super sentai show (he poses too!), Sid is a clear reference to Ellen Ripley from the Alien franchise, Maxx reminded me a bit of the Monstars from Space Jam, ARN-01D has a hint of Dalek and is named like the actor who became famous for The Terminator. The space amazon Tyara, instead, made my mind jump to a very specific episode of Futurama which is better left untold.

Overall, the cast is pretty balanced—at least from this casual reviewer’s perspective—and each character has more than enough tools to be an interesting choice.

Let me start with a premise: I’m mostly a casual player when it comes to 2D games. I have sunk my teeth into 3D games like Tekken and Soulcalibur for years, but when it comes down to traditional and anime 2D fighters, I can’t offer a precise critique from a purely competitive perspective. While playing it, I thought that Punch Planet was a very grounded game, which felt like a spiritual successor to Street Fighter 4. Movement is tight, links are where all combos lie, playing footsies is paramount to condition the opponent, and moves are quite methodical and intentional It’s not a fast game, but the damage with full resources can be very high.

This is also one of the few games I’ve tried where mashing buttons is actively detrimental for newcomers, as it can trigger a Double Time Cancel and deplete precious Time Meter resources. Playing Punch Planet is a good way to condition oneself to stop pressing them buttons at random.

The graphics, audio and soundtrack are excellent in their own rights, the UI is polished and easy to read, the voice acting is on point and full of personality. Punch Planet is probably one of the best looking indie fighting games on the market and oozes style from each cel-shaded polygon of its 3D graphics. 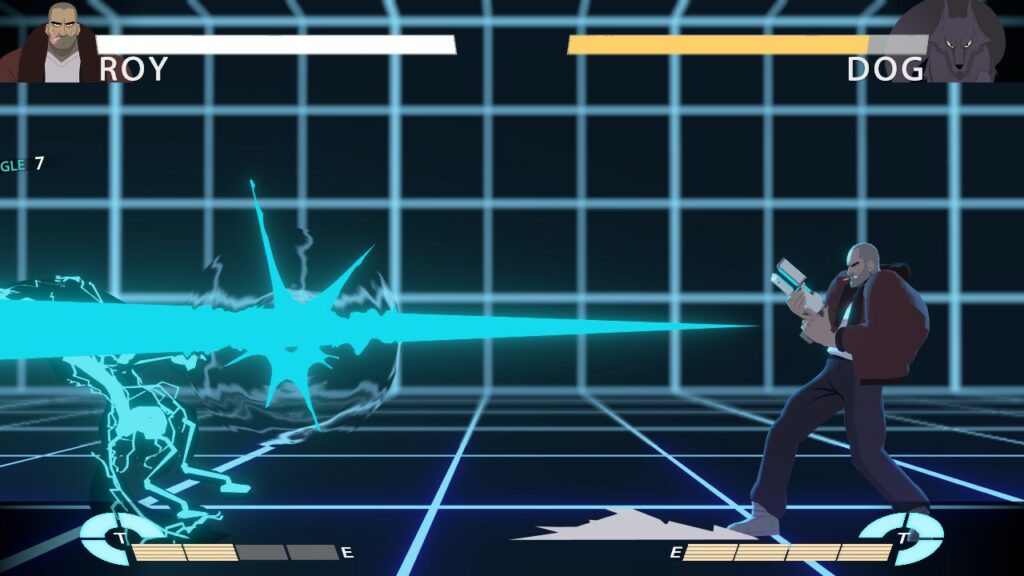 I will beat you with the power of zoning and this gun I’ve found.

Punch Planet offers a lot in terms of settings and quality of life features, including the possibility to boot the game directly in training mode (!), save states/load states in training mode, quick character selection, dummy recording, transparent information about the in-game damage scaling and juggle points…

This game wants to be accessible to new players by laying down all mechanics in an easy to pick way, but doesn’t make any discount on its game design philosophy. Punch Planet gives all the tools needed to learn, it’s up to the players to make them work. 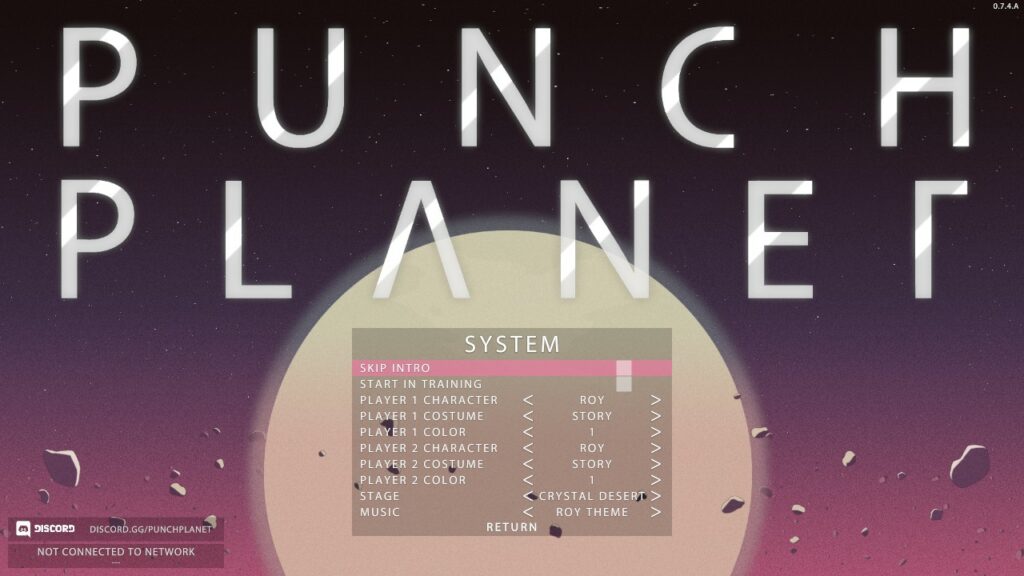 I don’t know many other games that offer the possibility to boot them up directly in training mode.

Punch Planet is currently sold in early access on Steam for 19.99USD/19.99€ and as a part of the Apple Arcade service. The developers have a Twitter account which they use to share news about the game and upcoming tournaments. If you want to play it against friends, the game has full support for online multiplayer, as well as local versus. Aside from player vs AI, AI vs AI, training mode and local multiplayer, there is not a lot more. There is a story mode planned, but it’s not yet available in the current version.