This weekend will see several niches in the FGC come together to compete & connect in Atlanta, Georgia for Climax of Night. Climax is one of several tournament labels that were forced to shutter under the effects of the COVID-19 pandemic in 2020 and is now poised to return with a strong showing for the French Bread, Gundam and Vampire communities. Let’s talk about what to expect from [real fighting roots ’21]. 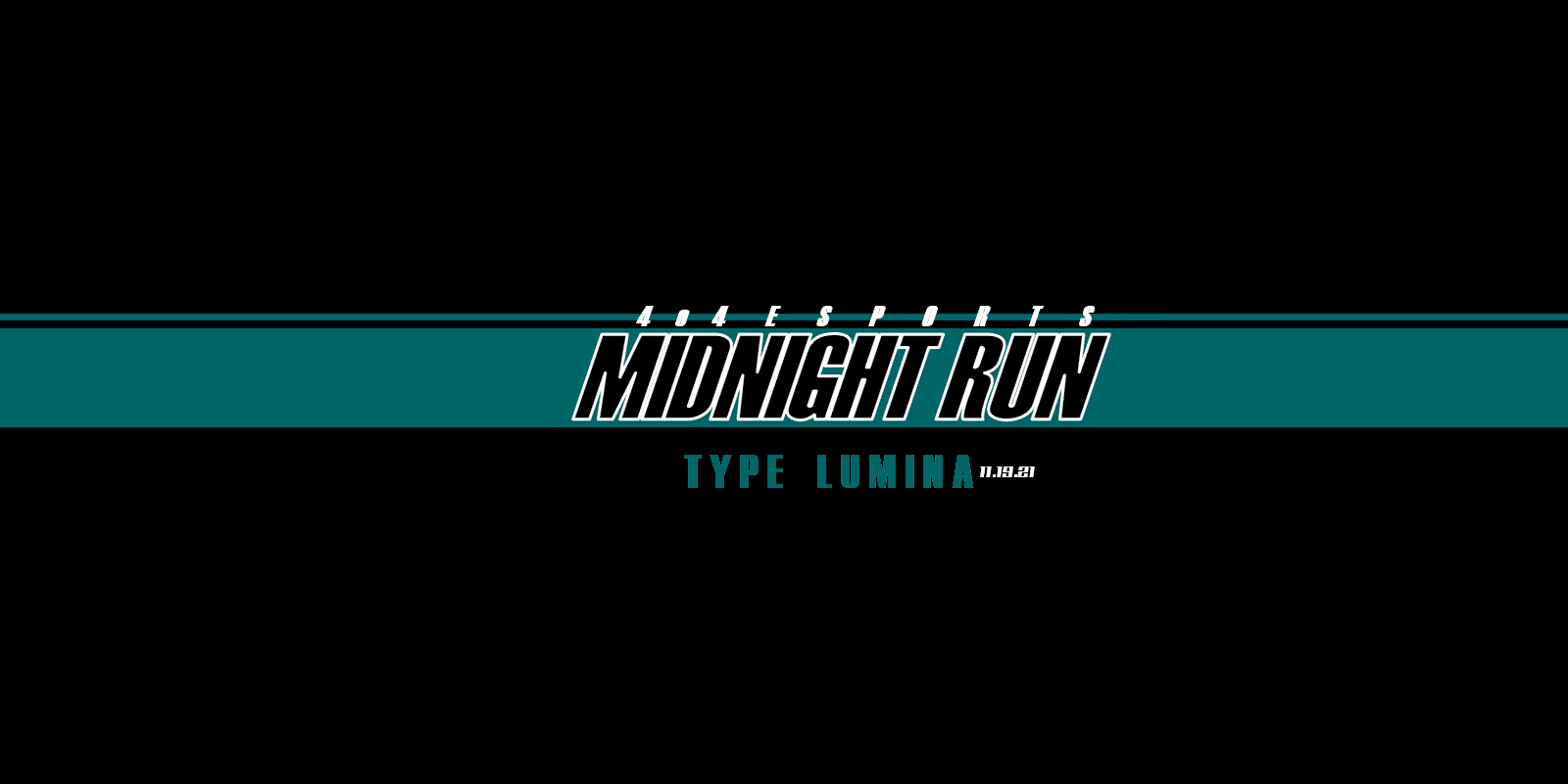 The release of Melty Blood: Type Lumina comes after plans for Climax were in motion, and thus there is no open bracket tournament for this game on the main lineup. This did not prevent the Climax of Night crew from working out a way to cater to the hungry competition. On Friday November 19th the Midnight Run tournament presented by 4o4 Esports will serve as a Type Lumina tournament for all those seeking it in the Atlanta area.

Refer to the Midnight Run Smash.gg page for registration (open until the day of) and look forward to the stream at 9 PM EST on 404 Esports’ Twitch channel. Additionally the 404 Esports online shop is selling commemorative Midnight Run merchandise. 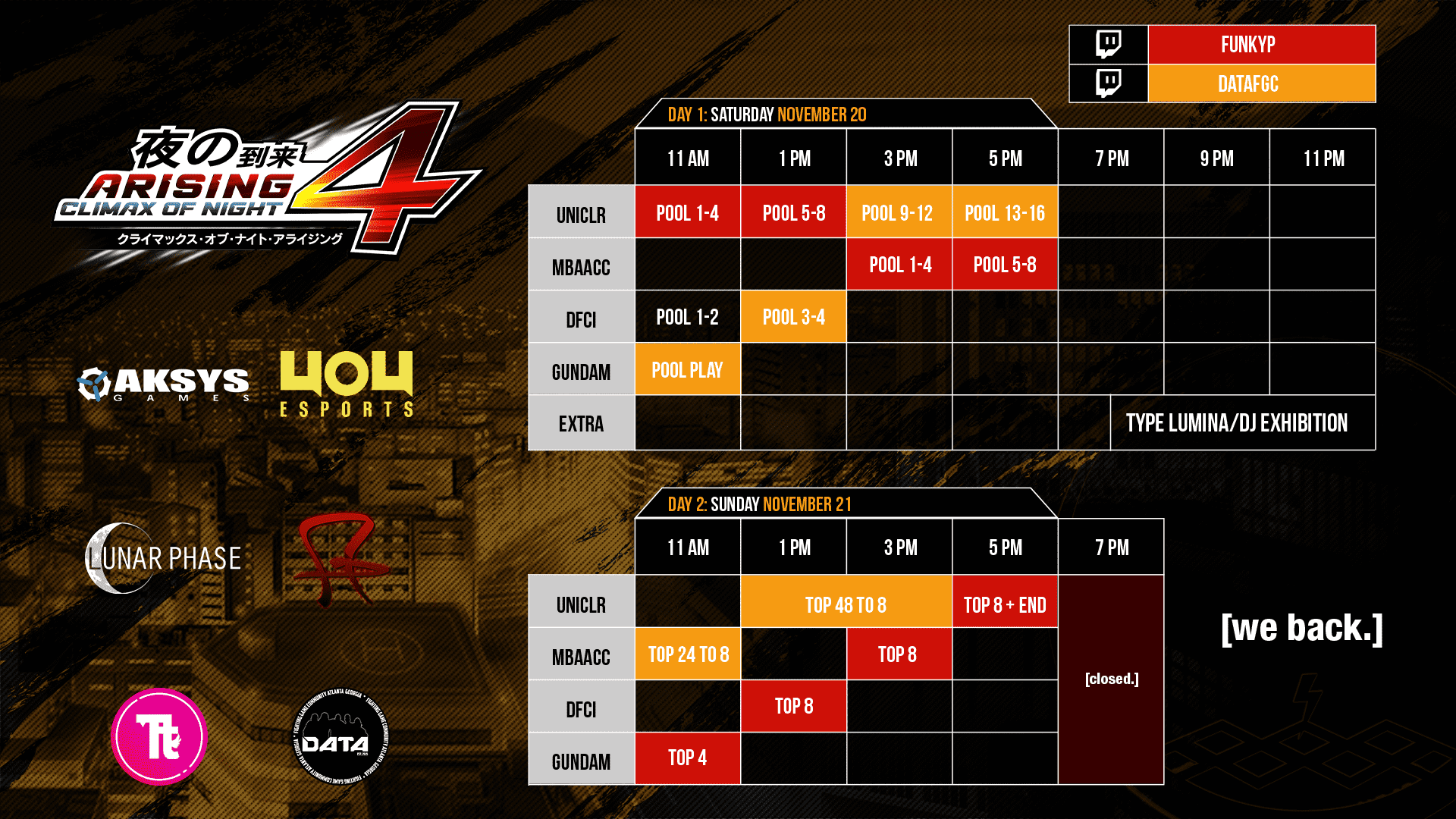 The line up of main tournaments for Climax of Night 4 are Dengeki Bunko Fighting Climax Ignition, Mobile Suit Gundam Extreme Versus Maxiboost ON, Melty Blood Actress Again Current Code & Under Night In-Birth [clr]. The event streamers will be DataFGC and FunkyP on Twitch over Saturday and Sunday starting at 11 AM EST each day with Gundam MBON Top 4 leading Sunday’s lineup of finalist brackets and closing out with Under Night. Refer to the official schedule for pool timings, the Smash.gg page for brackets and read on for exhibition and side event details.

After Saturday’s pools close Team Climax will present [that type lumina exhibition we were obligated to do.] – an exhibition round robin with a line up of strong American players and live DJ sets to compliment the action. The lineup of players will be Redblade, Magnets, Masoma, Jbel, Fame96, Gosuda, Scrawt, and Infinity. Tune in on FunkyP’s Twitch channel at 8 PM EST on Saturday the 20th.

How will it all play out for Under Night?

Under Night In-Birth in particular stands a game best enjoyed offline. With Climax representing a return to form for the offline UNI scene you may be unsure of where the current competition stands. Community member Juushichi shared his thoughts on how the bracket will shake out in a prediction stream found below:

We return to the offline VSAV world at @NightsClimax in November.

Entrants MUST have a CoN competitor/spectator badge to join, and MUST be vaccinated. See you there! pic.twitter.com/BzcKfDpSSY

There’s one last surprise in store: Sunday’s events at the Climax of Night 4 venue will include one side tournament for Vampire Savior presented by Vampire Arcadia’s Makai World Tour tournament label. While registration to this tournament is limited to attendees with competitor or spectator passes you can tune in at Vampire Arcadia’s twitch channel for the stream at 12 PM EST on Sunday the 21st.

If this is your first time watching or participating, you should know about Team Climax’s yearly shop efforts. This year’s edition of the online merchandise shop for Climax of Night carries limited run merchandise with art contributed by community members for the games represented. I confess that my favorite item might be the Midnight’s Hour hoodie. Buy a shirt, will ya?

For more information about Climax of Night follow @NightsClimax on Twitter. Discuss this event on the SuperCombo Forums thread.