This is the first article in my new irregular column Indie Fighting Prototypes, where we analyze indie fighting games in early stages of development that aren’t ready for a regular article yet. The first game we are going to cover is “Shuzen” (朱漸), a game developed by Japanese artist and programmer莉琉 (“Mariru”) that recently released its first tech demo!

Tech demos in the wild

In my continuous search for new indie fighting games to play, I often find projects in very early stages of development. Many of them show promising new mechanics and fresh ideas, but they are not ripe enough for a regular review. Sometimes, graphics are just sketched placeholders. Or, maybe, there is no music or sound effects. Or, at times, the only playable mode is local multiplayer, with no AI implemented.

However, I believe there is value in talking about games in their infancy, therefore, I am inaugurating this new series of articles dedicated to fighting game prototypes, tech demos and early builds! These articles will be shorter than my usual reviews and will focus more on what the game brings to the table and less on their overall presentation.

This week, we start with the game that acted as an inspiration for this column: the promising Shuzen (朱漸), made by Japanese developer 莉琉 (Mariru), who is also an active artist on Skeb. 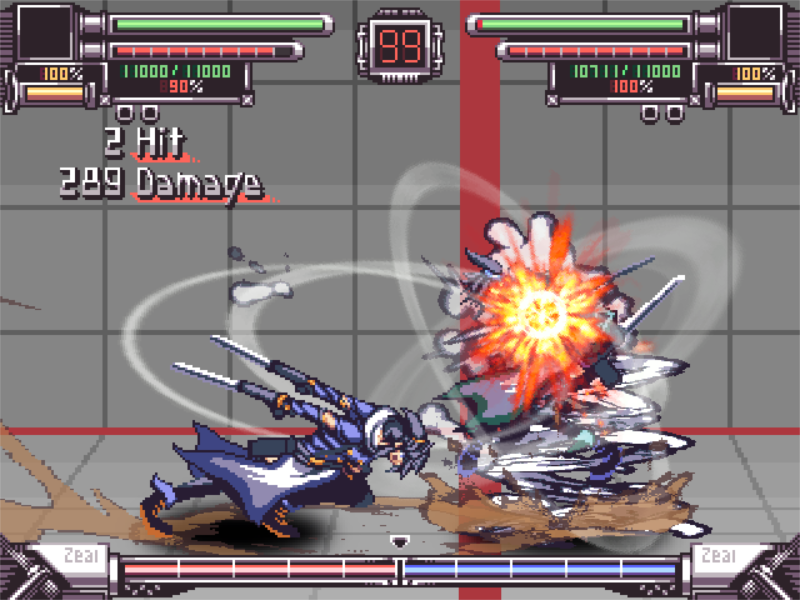 I will defeat you, with the power of a 4:3 resolution and this super flashy special move I’ve found!

Shuzen can be currently downloaded only from the developer’s Twitter or from their website (through a OneDrive link). The most current demo build is version 0.015 and things are evolving very quickly. This game is being made with a custom engine built with the HSP language (Hot Soup Processor), which is similar to BASIC and is commonly used in Japanese schools as a way to teach code (Wikipedia source: EN/JP). The language is freeware since 1996 and—according to Wikipedia—was popular in the doujin scene in Japan, due to its widespread availability. As someone who likes to understand how developers make their game, this one took me by surprise, as I didn’t even know such a programming language existed.

The developer keeps a devlog where they show how they work with HSP. Sadly, my knowledge of Japanese is not deep enough to follow them.

Training mode is all we need

The current build (as of the 3rd October, 2022) offers a language selection between Japanese and English at startup, thus bypassing the need for a Japanese locale to play the game. Only training mode is playable, with just one character, but do note that controller support and input remapping for both players are already coded in—thus, a dedicated versus mode might be available soon.

Directly from the start, Shuzen shows some incredible pixel art, good sound design and an interesting HUD. While the game is currently just a prototype, this showcases pretty well what to expect, including an overabundance of blood effects and particles.

We are talking about a traditional 2D fighter here, but there are some pretty unique design decisions at work, both in the control scheme and in the resource management. I will delve into both in the following sections. 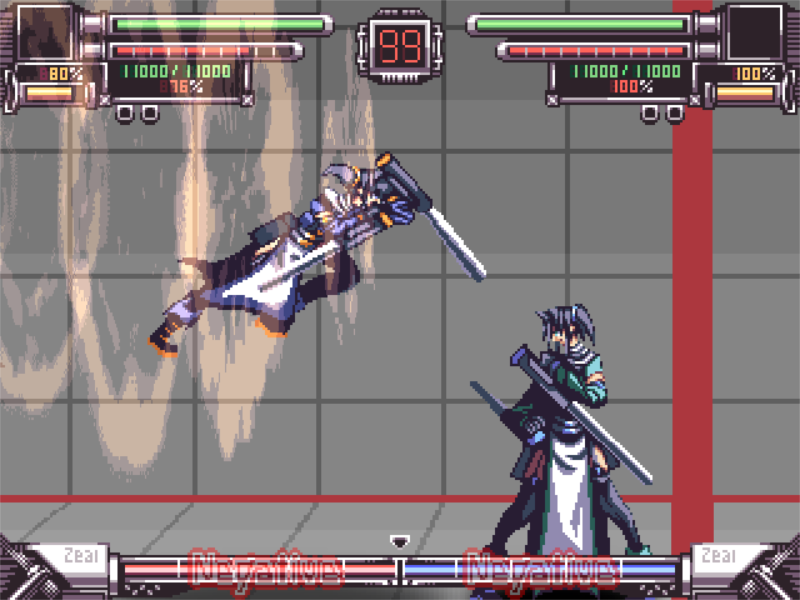 Zooming around the screen by consuming guard bar can be a good way to close in on the opponent.

No motions? No problems!

Shuzen is a four buttons fighter. The buttons are internally labelled as A (light attack), B (heavy attack), C (special move) and D (movement button, super button). These buttons can be combined with directions to access a variety of actions:

Notice that the direction button for the above maneuvers can’t be held, but must be tapped almost together with the attack button. However, the input buffer is very lenient. The D button follows its own rules, as all moves involving it will come out as long as the button was kept down when the other directions or attacks are inputted (e.g., to perform an enhanced special, one can press D and then, with D kept pressed, push the B button).

Much like in 52Beatup, there is no crouching stance. However, in this case, pressing down is used for blocking: Walking back won’t shield you from the opponent’s attacks.

Jumps are pretty floaty for now, but they allow for an incredible amount of trajectory control, by using the left and right button to steer the fall. Tapping any up direction allows for a quick hop, which translated into a very fast instant air attack. Momentum is carried over to attacks pretty neatly.

The game features also the usual air techs and ground techs on knockdown/launch, with directional influence to change the angle and direction of recovery.

There are other actions listed in the game mechanics docs, but these are all those I’ve seen available in the current demo.

Enhanced special moves cost 30% meter and are very flashy. The particle effects and screen shake sell the impact in a commendable way.

It’s all about resources

While the input system might be simplified, the resource management isn’t: There are three different gauges one needs to take care of while juggling their defense and their offense.

The most standard one is the MP gauge, the red one under the lifebar, which is used to perform special attacks with the C button (costing 10% meter) and enhanced specials with D+C (costing 30% meter). The MP gauge builds back over time and can also be recovered by attacking the opponent.

Next, is the guard gauge, which is the small orange one under the black square at the side of the HUD. The guard gauge refills over time, is depleted by blocking attacks and by using movement options tied to the D button. The bullet dash mentioned above consumes around 20% of the gauge, sacrificing defensive potential to allow for a faster offence.

The last gauge is the Zeal gauge, located at the bottom of the screen. Zeal is a tug-of-war style of resource: The more you have, the less the opponent has access to. Unbalancing the Zeal gauge in your favor greatly affects the damage output. A 100% imbalance in favor of one player results in a damage output of 200%. Conversely, though, losing the fight for the highest Zeal doesn’t apply any damage malus. The damage difference becomes VERY apparent, especially when one ends the combo with MP skills.

The Zeal bar is affected by how much on the offense one is, much like Guilty Gear’s tension. There is also a sort of “negative penalty” system against players who are too passive while playing. 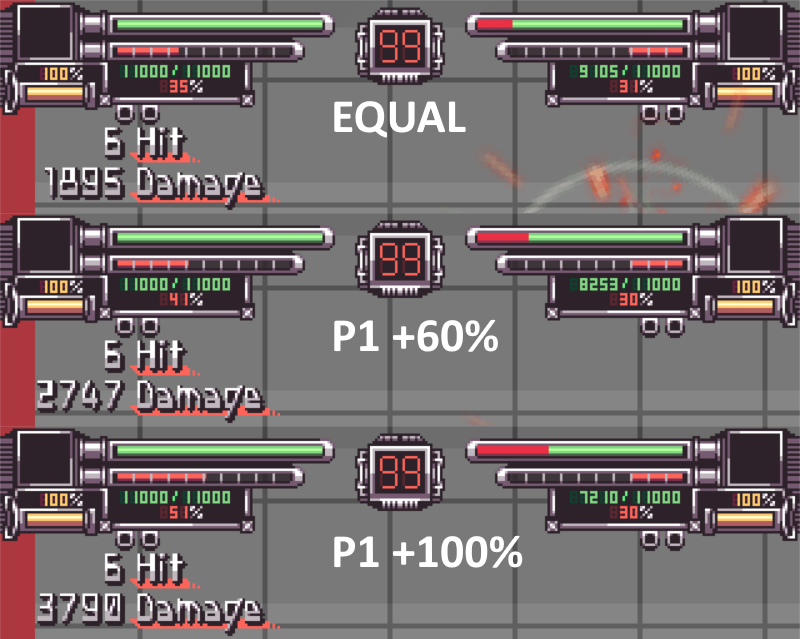 The Zeal system, in one practical picture. The more the Zeal bar is imbalanced in favor of one player, the more that player’s damage output will raise, up to a maximum of 100%. The 6-hits combo performed for taking this comparison was the same every time (A,A,A,B,C). The damage increases proportionally to the Zeal imbalance and this becomes very noticeable when specials and supers enter the fray.

Shuzen is just a prototype at the moment, but has already shown some interesting design decisions and a very promising art direction. The heavy focus on resource management, especially on the Zeal bar, makes me extremely curious about seeing versus matches and if/how they can turn into rabid one-sided steamrolls, as the bar keeps rolling.

Jumps are a bit too floaty and risky, but the instant air attacks feel incredibly satisfying to pull off. The lack of back-to-block might feel jarring at times, especially because muscle memory is hard to tame.

The absence of motions doesn’t make this game feel shallow by any metric, and I’m honestly very much curious to see how this will evolve. Till then, combo labbers and lab monsters, it’s up to you lot to find the first touch-of-death, if any!

"Shuzen" is a very flashy game. The first demo 0.015 with training mode does enough to showcase its combo potential! I can't wait to see what it will come out of it, when Versus mode is added!👀👀👀 #朱漸 #Shuzen [Game: Shuzen, by @Miyama_Mariru] pic.twitter.com/i2UAiIXWXX

What was interesting about it

If you are interested in more coverage about indie fighting games, you can find me on Twitter at @AndreaDProjects.