9/29: This story has been updated to reflect comments provided by FK Digital below.

Over the past weekend CEOTaku ran its course showcasing the shining era of Anime fighting games we currently enjoy as a collective “FGC”. With an event dedicated to showcasing Japanese developer exports there were community requests to bring certain titles and demos previously relegated to gaming events in Japan for their first western outings.

Chaos Code is one such game with a sequel title in development named Chaos Code Next Episode of XTreme Tempest. With its first western outing in Orlando as a playable demo questions have been raised about developer FK Digital’s lasting relationship with a western representative commonly known to represent hate speech movements and political figures. Let’s go over the complicated history.

Chaos Code and the Next Episode

In case you’re out of the loop of niche anime fighters Chaos Code is developed by Taiwanese studio FK Digital which made its way to Sega’s RingWide arcade platform first in 2011. Following a PlayStation Network release on the PS3 in 2012 for the Hong Kong market the demand eventually lead to a wider release in Japan, North America and PAL territories and a publishing deal with Arc System Works. Continued success brought about a revised game version subtitled “New Sign of Catastrophe” appearing on the Nesica arcade platform first and later to modern consoles including the Nintendo Switch as recently as 2020.

News of the next version of Chaos Code being in development had been around as early as 2018 with the “Next Episode of XTreme Tempest” subtitle revealed at Evo Japan 2020. That reveal at Evo Japan was was quickly followed up with news that development of the next Chaos Code would be paused for at least a year or more. Since 2021 it has been confirmed that development was resumed, with the first playable demo showing up in Osaka at an event called KGP in April of this year.

The first western tour of the game’s demo build took place at CEOTaku in Orlando, Florida. This demo was being presented by a person with the handle “Tenryo”. While multiple online commenters noted that a staff member of FK Digital was at the event questions were raised about Tenryo’s reappearance handling official demo builds of Chaos Code after a prior snafu with Arc System Works.

FK Digital denies employment of community member known for hate speech, who was later allowed to present Chaos Code Next

Tenryo’s history in English speaking Chaos Code communities makes his appearance to demo an unreleased game by FK Digital truly baffling to even consider. Following a misunderstanding of his relationship to FK Digital by Arc System Works support staff on Steam Forums, the Taiwanese developer issued a statement clarifying that Tenryo had no employment with FK Digital and “shall not represent F K Digital in any part thereof.” 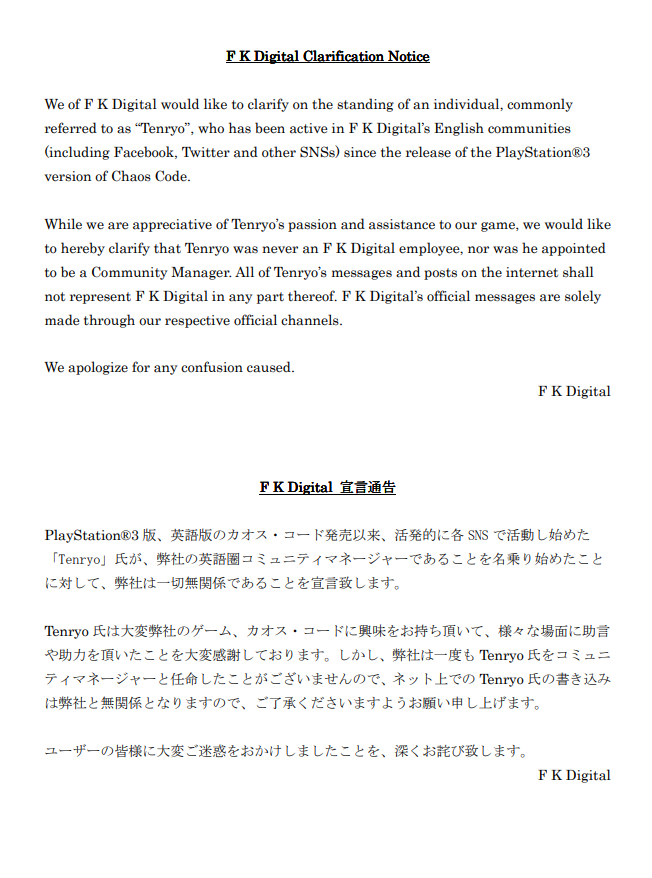 A copy of the statement issued by FK Digital denying that Tenryo is employed by or represents the company.

Following the Steam release of New Sign of Catastrophe, Tenryo reappeared to actively claim on social media platforms that he indeed works for FK Digital. At that time he spoke ill of Arc System Works employees representing the game on Steam forums which lead to his ban from posting there. A summary of the events related to his Steam Forum posts can be found here. Some time later following this he vandalized Mizuumi Wiki’s pages on Chaos Code which lead to a ban on this platform. Separately Tenryo was banned from the currently active English speaking Chaos Code Discord server for harassment of community members.

It was not until some time later after these events that Tenryo began posting on social media with photos alongside and posts in support of political commentator Nick Fuentes, a white nationalist and white supremacist figure who has been removed from several radio shows and digital platforms for his views on women’s rights, white supremacy and antisemitism among others. To date Tenryo is actively showing support of Nick and other far-right movements. Today, a VOD of the Chaos Code event at CEOTaku can be found on Cozy.tv, the streaming platform founded by Nick Fuentes to host his shows after being banned from several other livestreaming platforms. The main English Chaos Code Discord community & adjacent people have maintained that he was still unwelcome after these developments.

A person actively supporting white supremacy and far-right nationalism in the United States receiving the blessing of FK Digital to demo an in-development game is puzzling. Even moreso considering that this person has been previously disavowed by the company in official statements. Tenryo has taken to Twitter to claim that his appearance with the demo officially confirms his “affiliation with the company” and actively harass members of the community who have expressed frustration with his attendance at CEOTaku with transphobic and racist remarks. Tenryo’s planned attendance to CEOTaku with a build of Chaos Code Next was announced as early as August 9th. Community members inquired to organizer Alex Jebailey the same day about whether or not he would be allowed operate in an official capacity. SuperCombo has been informed that some messages sent to the official CEO Gaming social media accounts did not get a response but at least one person was informed that CEOTaku’s organizers were trying to determine FK Digital was sanctioning Tenryo’s appearance at the event and claimed that FKD included him in every email thread they used to communicate with the company. Furthermore a post on the official @FKD_EN twitter account promoted the event hosted by Tenryo mentioning his handle.

Commentary to FK Digital has been welcomed via a Twitter thread on their official account. The thread comments that CEOTaku’s demo was “not an official FKD’s event”.

On 9/29 FK Digital issued a tweet thread addressing the community’s feedback to Tenryo’s role at CEOTaku:

Regarding to #CEOtaku 2022 Chaos Code event,
it seems to have caused a lot of doubts to players and the medias.

FKD's intention was very simple –
"This is an opportunity for players to try CCNEXT and AOB!!" (1/5)

Regarding to #CEOtaku 2022 Chaos Code event, it seems to have caused a lot of doubts to players and the medias. FKD’s intention was very simple – “This is an opportunity for players to try CCNEXT and AOB!!” (1/5)

We didn’t expect so many troubles and doubts during and even after the event. We are truly sorry for such a thoughtless decision and will review it. (2/5)

If we have chance to participate in other events in the future, we will choose our partners carefully to avoid this happen again. (3/5)

We’re very grateful to the hoster who are so passion in promoting Chaos Code, even he is not an official staff of FKD. At the same time, we are deeply sorry for his attituate that might damage Chaos Code’s reputation and FKD’s fans. (4/5)

Finally, to clarify again, his messages and behavior are all personal opinions, and shall not represent #FKDigital. If you have any comments or proposals, please feel free to write or PM us. (5/5)

No other statements have been provided at the time of writing.

SuperCombo.gg has reached out to CEO Gaming for comments and will update if provided.