Do you remember that short trailer for a new fighting game revealed during Sunday finals at Evo this month? That was God Fighter, a new IP from a supposedly new developer named Arcadia Software promising “GGPO + 3D Fighter”. Here it is one more time:

This trailer is barren for details, giving just a bit of voiceover detailing some setting in Roman mythology with reference to Hercules. A bit more about what we can expect from the final game was revealed in a Twitter post, and a single screenshot of what appears to be in-engine combat:

Welcome to GFX! Learn more about our vision in this post: pic.twitter.com/KWniW43py2

Prior to the headline of this article breaking there was nothing else known about this title than a few snippets of in-engine footage and the promise of a 3D fighting game with online play powered by GGPO. Given the current relative drought of new releases in the 3D fighting space many people in the communities adjacent to games like Tekken and Soulcalibur were excited, especially for the promise of a new 3D weapons-based fighter being teased in the screenshot.

This was a conservative reveal especially for an indie title, but no expenses were spared in making sure it got as many eyes on it as possible with a reveal on the biggest screen in the FGC. This buzz leads to the usual band of people snooping webpages and rifling through social media accounts to find connections or unannounced information. This is how God Fighter’s ties to an NFT game and its developer were revealed.

On August 20th KingHippo announced his latest article on Twitter, describing his experience at Evo 2022 & sounding the alarm on the presence of Freshcut, a company promising gaming highlights as a timeline but with cryptocurrency somewhere in there complete with an angel investment from Evo parent company RTS. In the replies of his Tweet a user posted a screenshot of the source code for God Fighter developer Arcadia Software’s website which included a URL referencing “NFT Champions”:

you missed the other crypto/NFT scheme promoted during EVO finals day, and I don’t blame you – it’s only something you’d discover sleuthing through the source code on the developer’s website https://t.co/xOQBw6lyWS pic.twitter.com/1BYixtherS

The URL being highlighted (nft-champions.appspot.com) is where the “favicon” image for Arcadia Software’s website was being served from. Appspot.com is a domain used to serve web resources for the Google Cloud platform. The subdomain “nft-champions” is defined by the project hosted on Google Cloud. NFT Champions is definitely not a fighting game and is definitely a NFT-driven MMORPG that is currently in development. The same nft-champions.appspot.com URL is used to serve the game’s whitepaper (it’s a slideshow) and its own favicon.

Where things get messy is that the copyright notice for NFT Champions names “Sigma Branch”, and the email address listed for contact points to sigmastudios.net which takes us to a website for “Sigma Studios”, which is the actual developer name used in NFT Champions’ whitepaper. It is clear that Sigma Studios’ website for NFT-driven game NFT Champions was sharing a web host with Arcadia Software’s website, which promotes God Fighter.

Sigma Studios claims they are not lacking in fighting game expertise however! Their website promotes prior work on Street Fighter V and a software demo showcased with a screenshot among several others is “Fighting Game” with “Advance matchmaking, rollback netcode”: 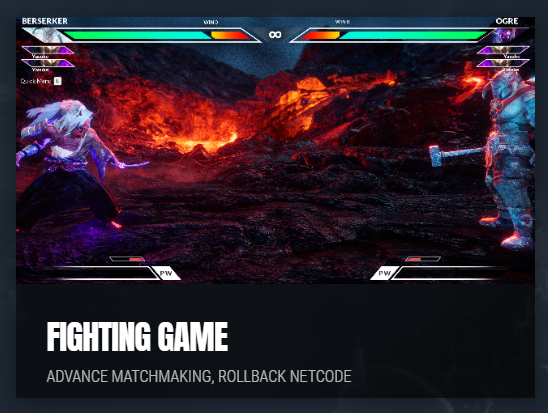 Now that’s a familiar looking game! The background and UI are almost identical to one of the most iconic bad fighting games ever released in modern times, Infinite Versus:

This video by X Edge sums up what went down with this short-lived game that promoted “Blitz Netcode” and brazenly committed copyright infringement with the ambition of being “3D Mugen”.

Sigma Studios appears to have licensed the code behind Infinite Versus in some capacity and stripped it of all the anime and Marvel characters it probably could not secure rights to, in order to promote the studio’s expertise in “fighting game netcode”:

Invented new zero delay networking technique, that modify roll back or delay base netcode to make them 100x better.

Bonus: Here’s a link to a GIF of the engine running with these new character models that is embedded on Sigma Studios’ website. It still looks as janky as we remember it.

We can now assert the following:

Regardless of anyone’s personal stance on blockchain technology and its adjacent concepts such as NFTs it was not reported in any press release or media that a connection between God Fighter and NFT Champions existed.

I took to twitter to report on this connection on August 22nd, and things changed the next day. As of August 23rd Arcadia Software’s website was updated to use an anonymized subdomain to host the same asset file. It still remains hosted on Appspot.com, but under a generic string of letters and numbers as the subdomain. The Internet Archive has a copy of the webpage from before this change which preserves this reference to the NFT Champions subdomain.

Arcadia Software has changed the URL of the resource hosting the icon to remove any link to NFT Champions, so clearly they've noticed. pic.twitter.com/ThVYLUAfc0

The God Fighter Twitter account also tweeted out an image with an “FAQ” which includes a clarification that the game “will NOT have any web3 components or NFTs”:

Here are some frequently asked questions and the answers.🙌
We hope this helps✨😎 pic.twitter.com/jwb2o0CjJL

For anyone unaware the term “web3” is a blanket category of technology concepts based around the use of blockchains including NFTs and DAOs.

This FAQ is also the first real dump of information regarding the game’s targeted release, with an early version of the game expected to be available in Spring 2023 and platform releases to Playstation 4 & 5, Xbox One through Series and PC through the Epic Games Store and Steam. No new footage or screenshots have been posted as of the writing of this article.

While Arcadia Software has made moves to try to clean any ties to NFT games, Sigma Studios has recently made moves to try to enter the fighting game market. SuperCombo has been informed through reliable sources that Sigma Studios approached several developers of Unreal Engine based fighting game projects featuring rollback netcode to offer license agreements paid for with a lump sum of cryptocurrency valued at or above thousands of US Dollars.

Developers that shared their experiences in dealing with Sigma Studios under anonymity point out that they were given a very short window of time to sign on their offers and that their website was already proclaiming that the studio is already a “pioneer” in zero-delay netcode while approaching several developers to license rollback netcode technology.

These developers were informed in the negotiation process that Sigma Studios is actively developing a new fighting game with the help of a support studio (that will not be named but is involved in Sigma Studios’ other works) and that they were presently building using delay-based netcode while attempting to find someone who could help them incorporate rollbacks using Blueprints, the visual scripting language used in Unreal Engine. In all cases the developers were promised by Sigma Studios that NFTs would not be used in the upcoming fighting game project.

Do you have an experience to share about working with Arcadia Software or Sigma Studios? You can write to SuperCombo via our tipline or email shib (at) supercombo.gg to reach the editor.