As this article is being written it is July 29th 2022. We are only a handful of days away from Evolution Championship Series 2022, the grand return of the most iconic fighting game tournament of all time, now under new management. Anticipation fills social media spaces as for the first time in years the Vegas strip will host the largest and most internationally-represented event in our community. An event that has, time and time again, proven to be the grounds where history is made. The schedule has come out, pools for the Vortex Gallery side tournaments are being released, and just today the commentators for the event have been announced. But slowly building traction is a common question being repeated through FGC Twitter;

“What the hell is Dino Rex?”

what the hell is a dino rex

Dino Rex is a 1992 fighting game developed and published by Taito that did not start life as a fighting game. Originally made to be another shoot-em-up from the team that made Gun Frontier and Metal Black, development radically switched to turn it into a fighting game after Street Fighter II came out and kinda sorta revolutionized the arcade landscape. Financially an understandable move as Street Fighter II was a level of lucrative that was undeniable and getting in while the getting is good could net out a pretty penny. There’s just one problem: the developers didn’t really know how to make a fighting game.

Holding up on the stick makes your dinosaur roar to fill their meter. Pressing down on the stick makes them block, which doesn’t work against all attacks but can greatly reduce the amount of damage taken, unless it doesn’t. You can only neutral jump by hitting down then up on the stick, three characters do not have jump attacks. No, you cannot jump in any direction, only neutral jump. If you somehow find yourself on the other side of your opponent, both dinosaurs call a mutual truce as they shuffle back into position. Hit detection is more of an intangible concept than a hardlined system mechanic. But nothing about physically playing it with your hands can stand up to the act of physically playing it with your ears, the roar of the Pachysaurus is an ear-splitting sound effect that plays again and again and again to make Dino Rex less of a game and more of the type of cruel and unusual torture the 8th amendment is supposed to protect us from.

I hacked Taito's Dino Rex and changed some sounds, now it's the perfect fighting game!

I gave the Pachy a sexy, commanding voice.

Legitimately the Pachy roar is so bad that a mod has been made to replace it with something not created to cause humans pain and discomfort.

Developers knew the game was filled with issues. They knew that a bug was causing the issues with hit detection. They knew there were bugs related to the controls. They wanted to fix it but they knew the deeper they dove the more bugs there would be. The game was made with Americans and European markets in mind but their sales agent for those markets went bankrupt so the game was re-tooled once again for the Japanese market instead. It had been going through problem after problem and not all of them were able to be solved upon release. It’s a bad game, not the type of bad game that is unbalanced but otherwise fine, not the type of bad game that is something you can make your own fun with even though it is broken, Dino Rex is an awful game that hurts to play unless modded or muted.

And currently the Puerto Rican online tournament ACP Tuesday Throwdown S2 Bonus Game has over 100 people signed up for Dino Rex with a Matcherino prize pool of over $1,000 (yes, you read it right).

On July 27th at 3:53pm, tournament organizer Krabb (@ACPKrabb) posts the promotional flyer for the Dino Rex tournament. A dinosaur wearing the pixelated sunglasses from the Deal With It meme of now a decade past proudly standing in front of a transgender flag as the words across the lower third proudly say “FEAT. THE BIGGEST PRIZE POOL INO DINO REX HISTORY (probably)”. At 4:35pm Krabb posts a screenshot under the graphic, the Matcherino for Dino Rex is at $0.55. They exclaim in joy that the proclamation had come true; this is (in all likelihood) the largest Dino Rex prize pool ever. At 4:36pm they post under that, wondering aloud “Unironically, I wonder what’ll happen to the universe if this thing actually does get a huge prize pool.”

It is now 11:04pm on July 28. The prize pool is at a shocking $19.45. A total of money far more than Dino Rex deserves. Krabb’s co-organizer Alexalchemy (@Alexalchemy1) loudly proclaims in all capitals that if the prize pool gets to $100, he will run a Dino Rex 10v10 at his next charity event Alexalchemy’s Charity Thing V. Krabb responds by saying that if the prize pool makes it to $100.01 they vow to stop Alex from running a Dino Rex 10v10 and will sabotage any future attempts. 12:18am, July 29th, Dino Rex is now at $191.04 and for how incomprehensible it is that this game, this dog water game, has a nearly $200 prize pool, the day had just started and by its end $191.04 will look like peanuts compared to what is to come.

The Dino Rex prize pool keeps climbing. People are entering, half under dinosaur-themed Challonge names and half under names like “ABANDON ALL HOPE” and “I hate you Alex” to show their disgust and duress in playing Dino Rex for money. Someone pays Heather (@ADHD2I) $10 to unregister, someone else pays Heather $20 to re-register, someone else pays Heather $25 to re-unregister. People within the ACP social circle are making memes, people outside the circle are wondering what is going on. Matcherino donations come with comments like “why”, “I’m causing problems on purpose”, and “I could have spent this on anything”.

So why is it that Dino Rex, a game that is technically playable at best, is blowing up like this?

Bad Things For A Good Cause

It showed up again at UltraYoshi’s (@UltraYoshi115) Fight For The Future II at the end of April. If the amount raised for The Trevor Project was greater than last time, Alexalchemy and Style Katarn (@Style_Katarn) would have a FT20 in Dino Rex, a set that did take place.

For some reason, this was played to more than 20. You would think no human would want to extend their amount of time playing Dino Rex.

The magic of Dino Rex is that because it’s so bad, so awful to actually play, it makes for a great charity piece. Of course people will, willingly or less than willingly, play this garbage for the right causes. That’s how we got ourselves in this situation to begin with. The whole reason Krabb and Alexalchemy are running an actual Dino Rex bracket is because of a donation incentive at Fight For The Future II; if the event raised $800 then Krabb promised to run it as part of the Tuesday Throwdown tournament series. 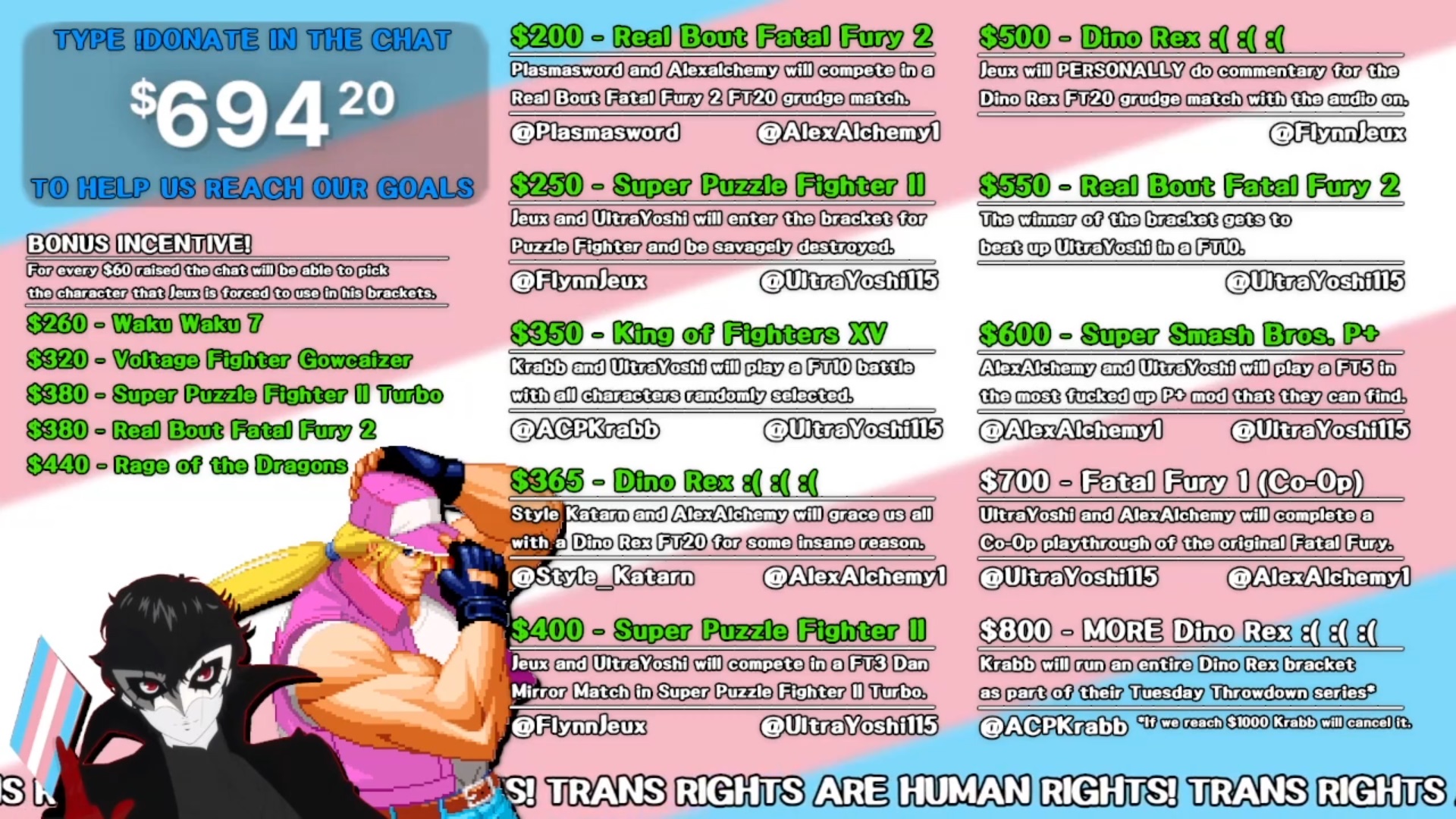 This image was taken at $694.20 for obvious reasons, but it did break the $800 mark. This image has nine (9) unhappy faces relating to Dino Rex.

We’re Back! A Dinosaur’s Story

And so perhaps that is why we find ourselves here, with a Dino Rex bracket bigger and more lucrative than most “normal” games. The continuation of a bad, but overall harmless, joke. The humor of seeing hundreds of dollars raised for a game few people actually want to play. I mean what’s funnier than $600? $700, and $800 is funnier still, and so on and so forth. There is no financial cost to enter and with Dino Rex on Fightcade 2 it’s easily playable, so why wouldn’t people join in on the joke themselves? I can’t guarantee that they will have fun once they sit down and play it, but it sure seems that people are having fun making the most ridiculous tournament blow up to an astounding degree.

But as much as this has exploded into an irony-fueled avalanche of a tournament, the TOs are taking care to run it correctly. Entries are capped at 128 now, split into four pools of 32, Top 8 gets paid out, and in staying true to their roots, the prize pool portion that is over $1k is going to charity. Donation incentives keep popping up in the wild however. FGC video producer Esteban Martinez (@TheBesteban) agreed to do a short video on the event if it hit $1,000. Kusoge grimelord and FGC’s version of Rick Evans TTTTTsd (@TTTTTsd_) agreed to commentate the tournament in a shark onesie if the event hit $1,200. While the tournament can only hold 128 players, we haven’t seen the ceiling on how much more can be raised for Dino Rex.

Evo takes place August 5th – 7th this year. For many, seeing the largest event we have return to offline will be worth celebrating. For the first time in years the Mandalay Bay will erupt with the sound of cheers and screams as some of the best in the world make their names on our biggest stage. But when the weekend wraps in Las Vegas and the post-event melancholy begins to set it, keep your eyes set on Tuesday the 9th. The Dino Rex server on Fightcade 2 will be host to a number of people far beyond what it typically sees. And a Puerto Rican collective will be live on Twitch.tv/ACPKrabb streaming a tournament with the biggest prize pool ino Dino Rex history (probably).

This article was edited with help by fellow SuperCombo writer Andrea Demetrio (@AndreaDProjects). Thank you to Krabb (@ACPKrabb) and Alexalchemy (@Alexalchemy1) for their time in interviewing for the article.

He/Him. Has worn almost every hat there is to wear in the FGC. I currently spend my time researching and editing wikis for poverty/kusoge, diving into under-represented games is an unparalleled thrill.「ＹＡＳＥ」@IdolismJ