This article is part of my ongoing “Indie Fighting Game Thursday” review/retrospective series, now on supercombo.gg! This week we talk about the first open beta of Fight of Animals, a game by Digital Crafter featuring a colorful cast of meme-y animal combatants and a simple, yet compelling fighting system.

Not even two months ago, I published a review of the new endeavor of the indie developer Digital Crafter—the futuristic make-a-robot brawler Fight of Steel: Infinity Warrior. Joypad in hand, Fight of Steel was a positive surprise: An exquisitely crafted game, with very responsive controls and an emphasis on dash-cancel combos. Before putting my hands on that game, I honestly hadn’t had many contacts with other Digital Crafter titles. Fight of Gods wasn’t really that interesting to me and Fight of Animals was something that piqued my curiosity, but ultimately not enough for me to try it out.

This changed a couple weeks ago, when Twitter user and competitive Fight of Animals player Butt69 asked me if I ever had a look at the game. Since his inquiry arrived during the Steam Summer Sales and Fight of Animals had a nifty 30% discount, I decided to bite the bullet and finally try the game out.

I wish I did that sooner. 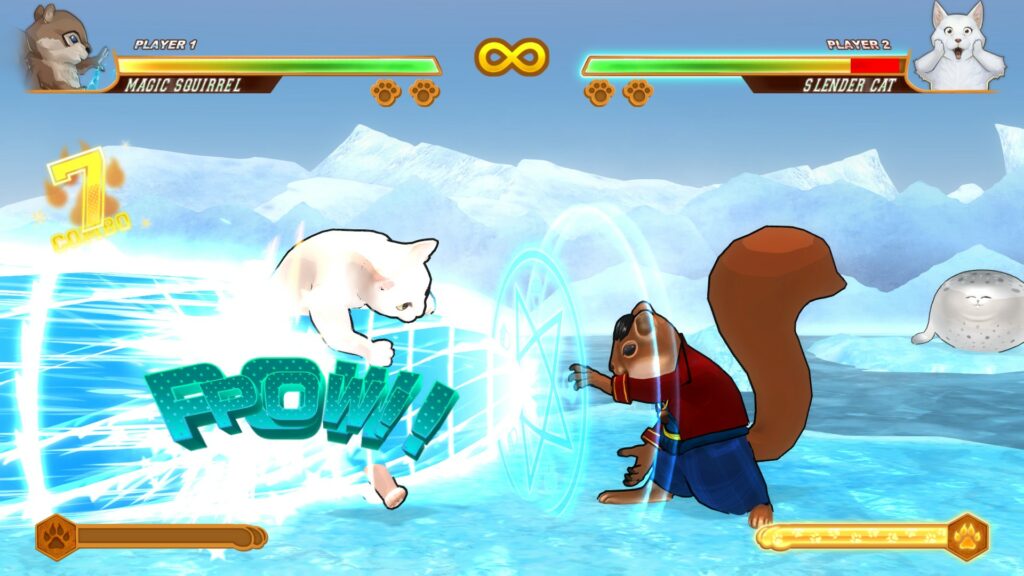 Let the battle for the strongest animal begin!

Fight of Animals is a weird beast to describe. Digital Crafter went from Jesus cross-ups to meme animals brawling in the span of just one year, but the level of additional polish Fight of Animals reached in such a small time (less than nine months between the two games) is stellar.

The UI and general visual impact is good and feels more lively, the character models are distinctly low-poly, with a very good cel-shading effect, the cast is on the smaller side but offers enough variety. 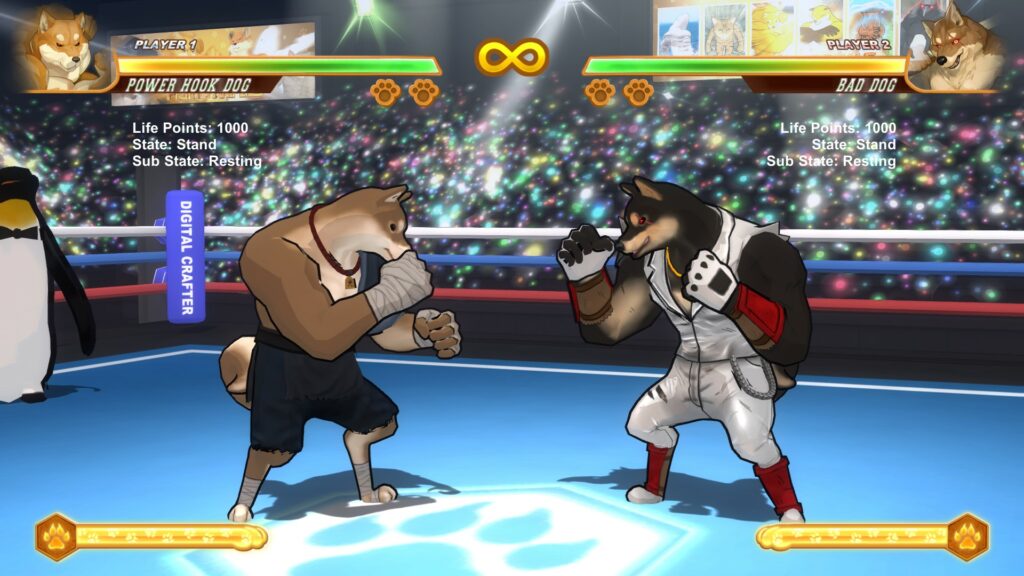 Cutting corners in a smart way

I’m not sure what the budget for Fight of Animals was, but all things considered there is an air of “doing the most with the smallest investment” that I can’t help but commend. This aura permeates the whole game and it’s equally charming and intriguing, especially under the lens of another developer.

Doing a very quick comparison with Fight of Gods, we can see that the size of the cast is smaller, the number of stages and music tracks too, almost all supers lost their cinematic sequences, there is no voice acting and the number of moves is sensibly inferior to that found in their previous work. Moreover, the Christmas stage is no other than Santa’s stage in Fight of Gods, with brighter shaders and a more cheery atmosphere, but reusing the same song. From what I’ve heard from reliable sources, grabs were cut altogether from Fight of Animals because of the additional development time grab animations would require.

One could think that such a downsized title cannot be that deep. However, they’d be totally wrong, because what’s left is more than enough and is the core of a very compelling fighting game experience. 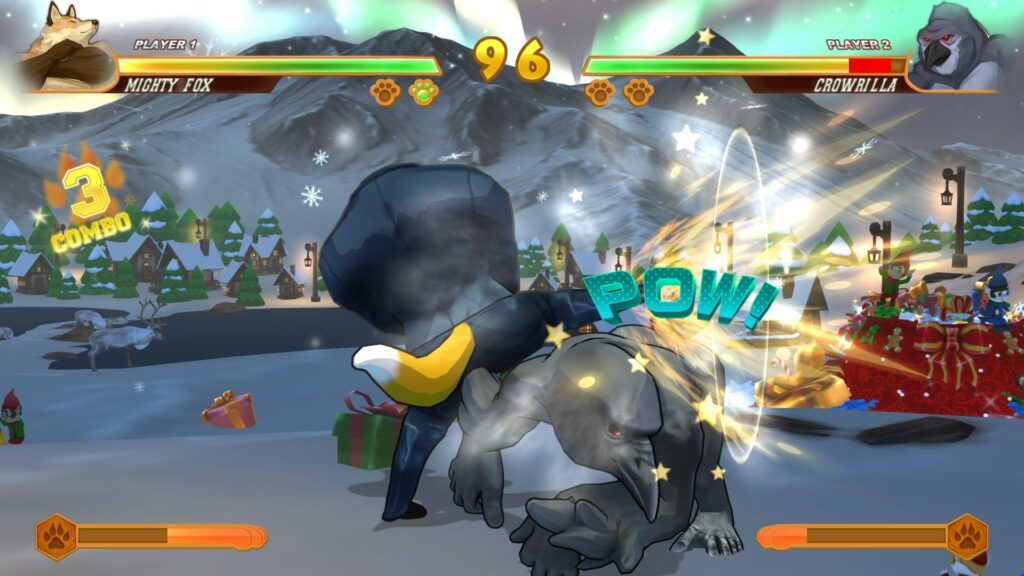 The Christmas stage of Fight of Animals is a 1:1 port of Santa’s stage from Fight of Gods, if only with a brighter shader and a more cheerful atmosphere. Even the music is the same.

The control system of Fight of Animals is pretty simple: There are two buttons for normal moves—Light and Heavy—that can be used while standing, crouching or in the air. Heavy attack deal a small amount of damage while blocked and there aren’t any command normals (e.g. forward plus Heavy). Crouching Heavy is a sort of universal launcher that is extremely punishable on block but can be used as a juggle starter.

As mentioned before, there are no grabs at all, the mix-up game is just low/overhead, but the reward is so huge that you don’t feel like you need a grab option.

The other two buttons are the Skill button and the Super button. The Skill button gives each character access to an universal, fast overhead attack and three different special moves, accessed by pushing it with back, forward or down respectively. Some special moves can be canceled into each other, and some can be canceled into super. However, what most—if not all—special moves have in common is that they can be dash-canceled on hit, by pressing forward twice in a quick succession.

The Super button has two separate uses: The first is to trigger each character’s super move; the second is to trigger a defensive burst, that can be used both while being hit by the opponent or blocking their assault. Both maneuvers cost the entirety of the super bar, which however refills pretty quickly during the match.

The Skill and Super button have no uses in the air, which means that each character has a grand total of eleven moves at their disposal (six normals, one universal overhead, three directional specials and a super move), with Crowrilla being the exception and having an additional air special. 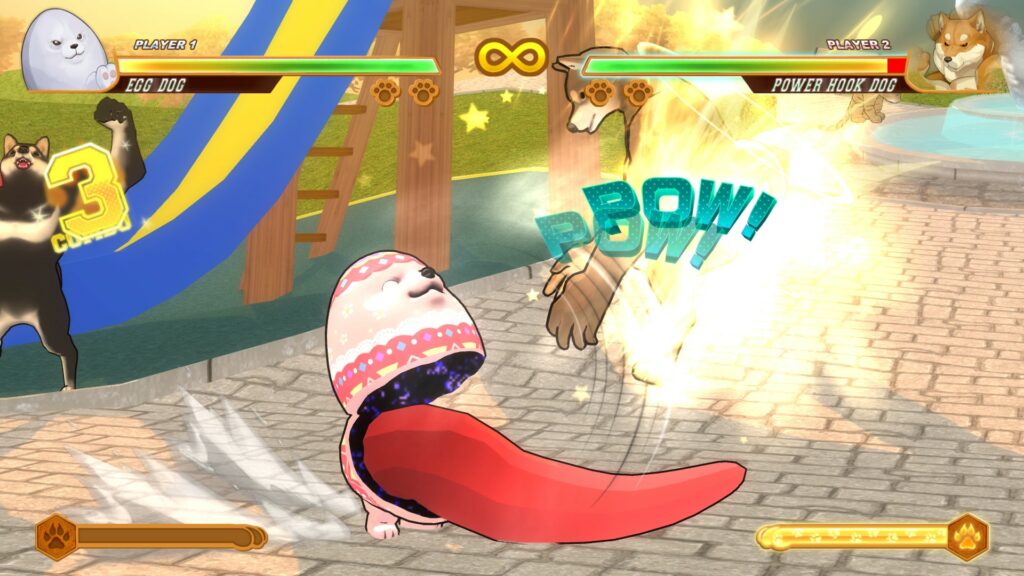 Egg Dog is a freaking eldritch Lovecraftian abomination. His super wasn’t something I was ready for.

The game isn’t hard to learn. The most complex part, execution wise, is definitely how and when to dash cancel to link attacks during a combo and what can be canceled into what for maximum damage. There is also a simplified mode that can be chosen in the character selection screen and allows for different autocombos by repeatedly tapping the Light or Heavy button in different sequences, much like Mortal Kombat dial-a-combos or Tekken strings.

The only downside of turning this mode on is that you aren’t able to mash Light attacks to confirm your hit before starting a combo, which might be detrimental if someone aspires to compete in the game. 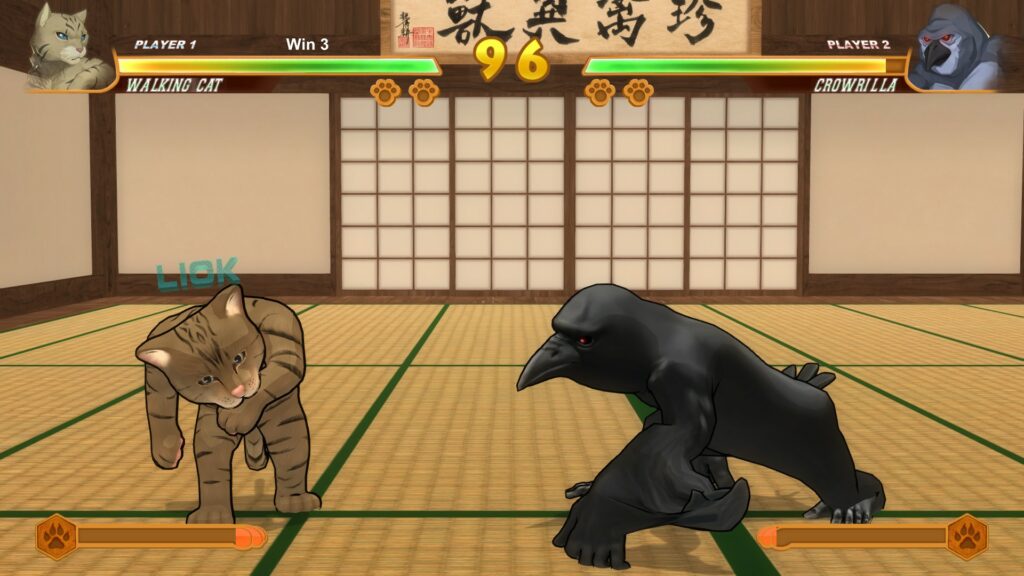 Walking Cat is the only character which has access to a counter attack stance. It might be tricky to deal with, because it forces the opponent to think instead of mashing buttons.

Fight of Animals offers a choice between twelve different characters, two of which must be unlocked by clearing arcade mode once with any character. While all fighters share the same inputs, their playstyles are wildly different. You have some with strong zoning tools, like Magic Squirrel and Fluffy Sheep, mix-up specialists like Slender Cat and Kung-fu Dachshund, left/right crossups monsters like Muscle Beluga, setup characters like Egg Dog, defensive characters like Mighty Fox and Walking Cat and very offensive ones like Crowrilla. Most of the characters are inspired by an animal meme of the late 2000s/2010s, including the long cat, the right-hook dog, the gorilla crow and many others.

The cast seems fairly balanced, but some characters are definitely easier to pick up. As a personal experience, Power Hook Dog, Mighty Fox, Kung-Fu Dachshund and Fluffy Sheep were the characters I had least troubles building up a decent combo with in around 15 minutes of play, while figuring out Crowrilla, Egg Dog and Slender Cat is being a bit harder for me. 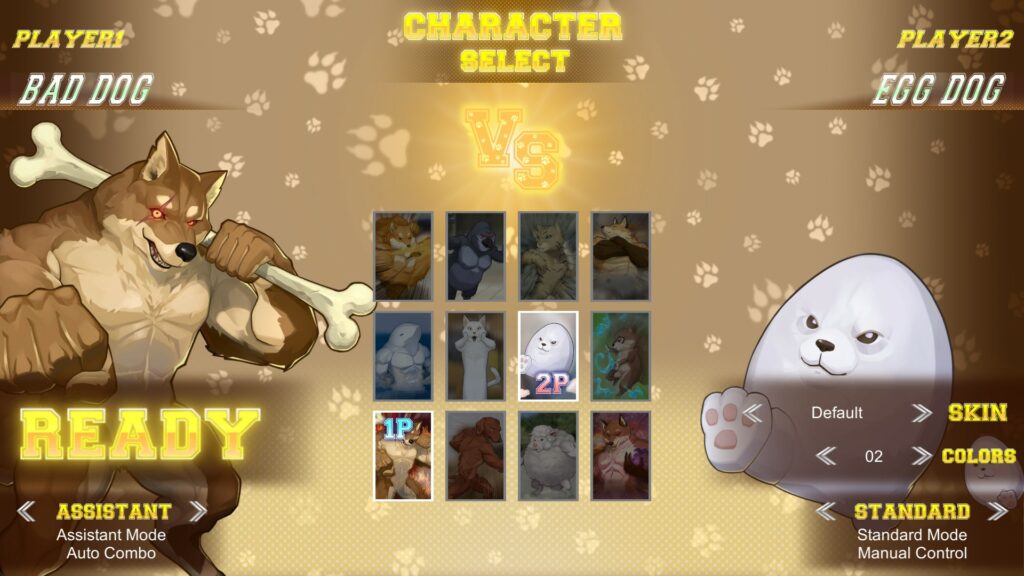 One thing that stands to the eye is how negative everything is on block. According to the Mizuumi wiki, Light attacks are around -10 on block (which, for people not in the biz, means that the opponent will move 10 frames—around 1/6 of a second—before you, if they block your Light attack). Since Light attacks have an average startup of 6 frames (around 1/10 of a second), this means giving the opponent a free combo on you.

There is almost no safe attack in the game, to the point that—according to competitive player Butt69—”mashing Light can get you punished from what I know, which makes it a weird game of chicken“. Butt69 went on to describe the competitive meta as follows [emphasis mine]:

“There is no scaling in the game, and no grabs either, making combos the difference between life and death. Bursts can help, but if you burst while in the corner, it’s possible to be counterbursted and be combo’s from the burst.”

This analysis is corroborated by the general combo structure of the game: Light attack and Overheads combo into Heavy attacks seamlessly, then into special, then into other specials or dash cancels for corner carry and additional damage—but only on hit. On block, most cancel routes are just removed, leaving your character as a sitting duck.

In my experience, you can also risk being contested on hit, if you don’t capitalize on your successful attack and don’t rapidly cancel your Heavy or Light into something else, which makes for a hectic exchange of blows. For example, a successful Heavy attack that isn’t canceled will leave you with around 4 frames of advantage, which are only enough to try a Light attack uncontested but not enough to go for another Heavy without risking being interrupted by the opponent.

High risk, high reward is the name of the game: An average meterless combo in Fight of Animals can deal damage for 40-70% of one’s lifebar, with peaks of 90% with a super, which makes this game a potential two-touch interaction. As already mentioned by Butt69, there is no damage scaling either, only gravity scaling, which dictates when a combo has to end.

Fight of Animals being Will it Kill material, amirite? This happened during the Indie Breakdown tournament, by the way—which is coming back this year

What’s in the package?

Aside from the very prominent competitive aspect, I want to spend two words on the package. Fight of Animals comes with the standard package of arcade mode, local versus, versus AI, and online lobbies—powered by Digital Crafter’s own rollback netcode.

There aren’t any unlockables except the two boss characters, Tricky Fox and Bad Dog, that are however perfectly balanced for competitive play and can be obtained by clearing arcade mode once with any character.

Each character has five or six costumes, around half of which available as additional DLCs or bound to the previous purchase of Fight of Gods. The AnimEvo and Fight of Gods costumes are basically t-shirts with the event or game logo on. Each costume comes with two colors.

Arcade mode is fairly standard, with the Tricky Fox/Bad Dog duo as the de-facto bosses, but the difficulty isn’t something to laugh at, especially for players new to the game: Even when playing at Normal, some AI opponents will keep on relentlessly attacking you or trying to cross you up, without leaving any room for breathing. It might be overwhelming at first, at least until you have learned one solid combo to use to punish their aggressive approach.

The game made an appearance at Combo Breaker, during the Look Alive event, commented live by Sajam and Tasty Steve.

Fight of Animals will have one last, swan song tournament this year at Vortex Gallery 2022, hosted at EVO on the 5th of August, 2022. Sign-ups are open until the 23th of July 2022, and, if you are around Vegas or already attending EVO, you are welcome to be part of one crazy last round of relentless animal brawl! You can also contact our chief editor Shiburizu for more details.

Fight of Animals is headed to Vortex Gallery at @EVO!

Special thanks to Twitter user Butt69 for giving me information about the game, including notes about its competitive history, and to SuperCombo’s chief editor Shiburizu for proofreading the article before publication.