How much is too much to pay for a videogame? The old wisdom is more than $20, but it’s probably fair to draw the line when a game is seven times more expensive in your region compared to competing titles. With Capcom Fighting Collection, DNF Duel and JoJo’s Bizarre Adventure All-Star Battle R all on the way one thing has become clear – they are all far too expensive to buy in international markets at local currency. Let’s go over the numbers.

What is regional pricing anyway?

Steam offers developers the ability to offer games at different price points in different countries, including suggestions on what the right price point would be based on a high-level intended price (such as $59.99 USD). The reason to do this is that in countries like Argentina which we will be using as an example throughout this article the minimum wage is hovering around $350 USD which makes a $60 videogame purchase a slice of at least 15% or more of a person’s wages. That’s not very enticing to consumers in markets where similar percentages apply, so in order to actually get anyone to buy these games the price must be adjusted to something reasonable for the market.

This is why Guilty Gear Strive is priced at $5.29 USD (ARS$ 649,99) and Mortal Kombat 11 is priced at $9.75 USD (ARS$ 1199,00) as a few examples of lower prices in this market. It’s worth noting that this issue is not exclusive to fighting games at all and it’s pretty frequent to see companies simply charge the full USD price tag, which is why piracy in these regions is so commonplace. You can easily see the different market prices on SteamDB for each game.

Purchasing power can vary significantly from country to country, and the price for goods and entertainment is affected by many factors. As a result, Valve’s recommended pricing does not represent exact foreign exchange rates. We update these guidelines periodically, as foreign exchange rates or other market factors warrant.

The best examination of this issue with upcoming fighting game releases is to compare the prices to Guilty Gear Strive which currently has a base line USD price of $59.99. In Argentine Peso we can math out:

It’s worth keeping in mind that JoJo’s already has DLC passes announced while DNF Duel is almost certainly going to follow up with DLC news. It’s easier to visualize how games that are priced higher in USD still somehow end up cheaper in international markets using a chart: 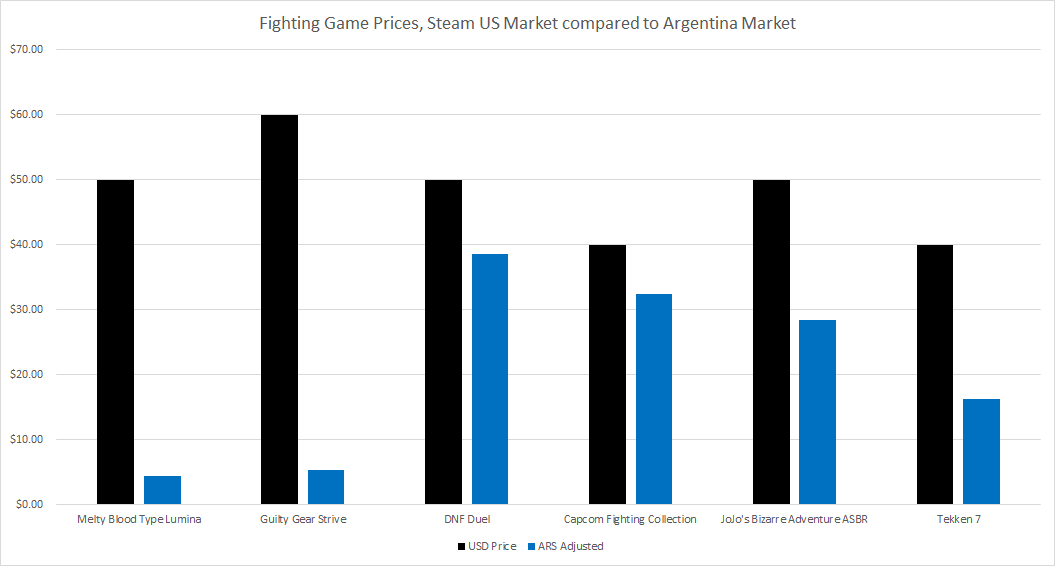 Reaction from international FGC players particularly in Central and South American countries has been a mix of memes and calls for the publishers involved to take action. It’s worth reiterating this issue is applicable to many countries around the world, and this topic has been raised previously for major game releases in South East Asia.

I look up the price of Capcom Fighting Collection because i just remember that it will come out next month and holy damn that price pic.twitter.com/wG6xG7stoq

The only notice that has been posted from Bandai Namco, Capcom or Nexon on the matter has been this notice from a moderator in the /r/DNFDuel Subreddit Discord server:

In the past these price adjustments often don’t come with announcements, and may be shifted after the game’s release date so pre-ordering at these prices probably isn’t worth your money. I know it isn’t worth mine as an FGC writer from Costa Rica where DNF Duel is uncomfortably more expensive than its competition.