Perhaps the most anticipated of fighting game majors since the return of “offline” is going down this weekend – It’s Combo Breaker 2022. With a stacked lineup of both main-stage games and a concerted effort for community tournaments in “All In Together”, we’ve got a lot of fighting action to watch. Let’s preview the schedule and streams right here.

TMNT x Justice League Turbo is a fan-made tag fighter crossing over two fighting rosters from the SNES – and it’s coming to Combo Breaker as an official tournament this year! If you’ve never checked out this game, Hold Back to Block has produced an excellent documentary about its development and future.

Give it a watch and download the game completely free of charge ahead of the tournament at Combo breaker.

The full program schedule is available on the image below provided by Combo Breaker: 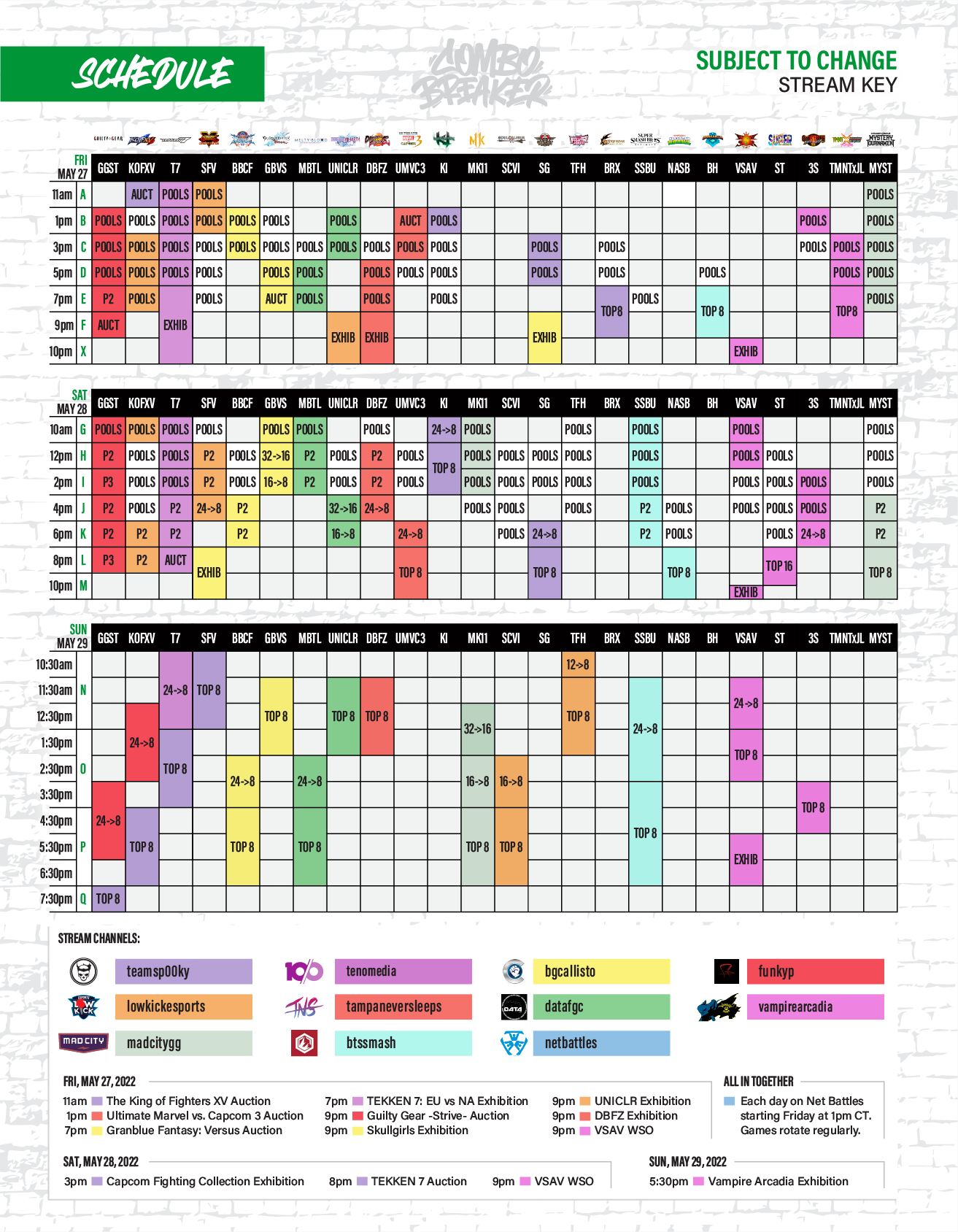 Official schedule updates will be available on the Combo Breaker twitter account and at the website’s Program Guide section.

A Spanish-language restream of all 3 days of the event will be live on the Kaizen City Twitch channel by Venezuelan streamer Ninocci. The entire event is cleared for co-streaming, so consider either visiting a dedicated restream or hosting your own throughout the weekend.

While Combo Breaker’s tournament streams are running pretty much the entire weekend, there will also be a variety of streamed exhibitions to enjoy. Read on for titles, team lineups and stream times.

Capcom will be showcasing the games included in the upcoming Capcom Fighting Collection by hosting a single elimination exhibition where viewers will decide what game is run every bracket round. Catch it and participate live on Saturday at 3 PM CT on Team Spooky.

Capcom Fighting Collection will be at @ComboBreaker 2022 from May 27-29! Play 10 classics on the show floor to receive a special poster.

Watch the 8-player tournament exhibition on May 28 at 3PM CT where viewers will select which titles are played: https://t.co/7MqGUgCduU pic.twitter.com/QVlr5kCDGR

As the Skullgirls community considers Combo Breaker one of its most prominent majors, the showing will be equally grand. A 7v7 crew battle will be live on Friday at 9 PM CT on Callisto Media. This stream will include a live preview of upcoming DLC fighter Black Dahlia! The Black Dahlia exhibition set will feature SonicFox and Penpen.

Under Night In-Birth by Pange Bataille

French Bread community showrunner staple Pange Bataille is headed to Combo Breaker with Under Night In-Birth exhibitions! Catch it on the Low Kick Esports stream from the LKO stage on Friday at 9 PM CT.

Several top Tekken names and high-ranking regulars of the ICFC Tekken online series are organizing a Waseda style 10v10 exhibition at Combo Breaker. It all goes down on Friday at 7 PM CT on the Teno Media stream. Check out what each team captain has to say about the lineup:

Captains' Comments on the 10v10@tk_anakin: This win is a good start to my Friday.@SuperAkouma: I got more trash to take out with NA. pic.twitter.com/PQbTBDLBBq

Filipinoman and RobTV are putting together a 5v5 between two highly competitive North American regions in Street Fighter V. Catch that on Callisto Media’s stream on Saturday at 8 PM CT.

It’s eight versus eight between Europe and the United States in a long awaited encounter of the Dragon Ball FighterZ community. The DBFZ exhibition goes live on Friday at 9 PM CT on Tampa Never Sleeps.

Vampire Savior will not only be a main stage tournament at Combo Breaker but also be featured in two events hosted by Vampire Arcadia. On Friday and Saturday at 11 PM CT each day there will be a Real Vampire Hours stream for winner-stays-on casuals. To close out Combo Breaker for Vampire action is a 2v2 Waseda Team Tournament with open entry via Start.gg! Expect that on Sunday at 8 PM CT. Everything here will be on the dedicated Vampire Arcadia channel.

On Sunday 5/29, we are going to be hosting an open entry Vampire Savior 2v2 Waseda Team Tournament!

The top team will receive an additional special reward.

Community Tournaments – All In Together

The list of community tournaments at Combo Breaker 2022 is extensive, with some community darlings and wild new gems in a grab bag of nonstop action this weekend. This year’s dedicated community stream is labeled “All In Together”. Resident writer IdolismJ will be out in the field hosting several of these tournaments and has prepared the Spectator’s Guide to All in Together! Give it a read, watch some clips, and tune in to your picks throughout the weekend.

If you’re in the area, registration for community tournaments is still open for most games!

All In Together stream schedule and channels (CDT)

Combo Breaker is promising that at least each community tournament Top 4 will be streamed where possible, so here’s the full list.

Currently there are no announced streams for Neo Turf Masters and all Smash related side events. If you know of a stream, drop us a line! Also keep an eye on the Combo Breaker twitter account for updates. 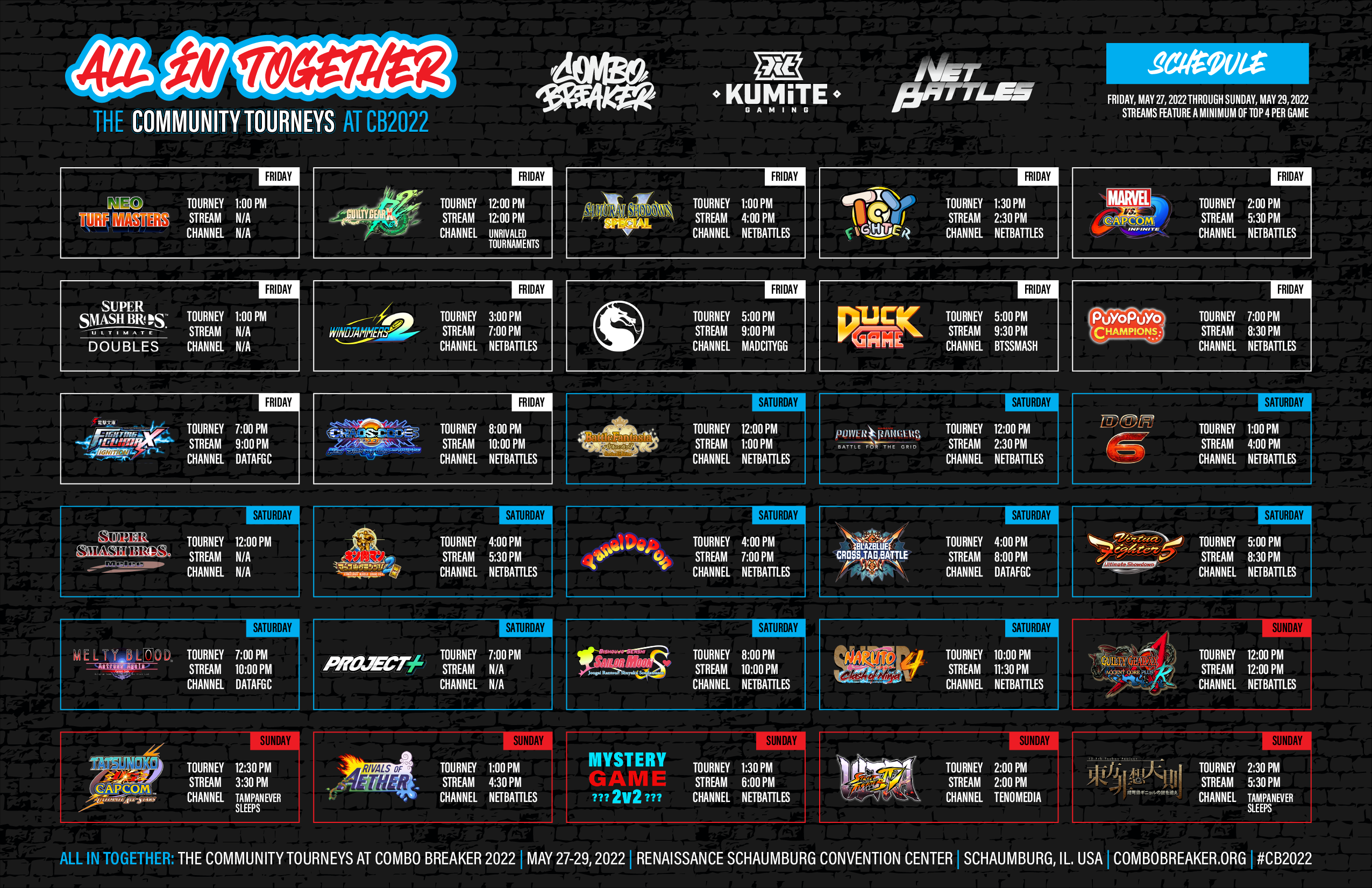 When does the Combo Breaker 2022 shop go live?

A major attraction of Combo Breaker each year is the dedicated merchandise shop. The Combo Breaker 2022 shop will be going online on Friday before the event at combobreaker.org/shop. This was confirmed by organizer TheHadou on UltraChenTV during his recent interview:

Items from the Combo Breaker shop are known to sell quite fast, so don’t miss it on Friday morning and place your orders ASAP.

That’s (almost) everything! There will be a variety of live events and hype moments to experience either at the venue in Chicagoland or living the stream monster life at home. If there’s anything you think we missed, let us know ahead of the event on our tip line. Got any hype moments to share after they happen? Share with the community on the SuperCombo Forums thread for Combo Breaker 2022. Our front page player will be highlighting all official streams 24/7 during the weekend, so check back often get everything at a glance.