This article is part of my ongoing “Indie Fighting Game Thursday” review/retrospective series, now on supercombo.gg! This week we talk about the first open beta of Fight of Steel: Infinity Warrior, the newest game by Digital Crafter —a full-metal robotic gem with customizable movesets that could fill a very specific niche.

I like—no wait—I LOVE robots. One of my favorite movies of all times is Pacific Rim (yes, I know it sounds cheesy, but whatever), I used to binge Robot Wars, and every single one of my released fighting games has at least one robot as a playable character. Robot-centric fighting games aren’t that rare (see Zero Divide and Rising Thunder only to cite a few), but modern ones are. For a while, I played an early beta of Metal Revolution, but the feeling was kind of “off”: The mechs were too human-like and not robotic enough for my tastes.

ROBO OH, Kronian Titans and Uchu Mega Fight helped a bit, but, while being very interesting games, they weren’t exactly what I was looking for. Thus, I resigned myself to have to wait much, much longer before I could find something that scratched that itch… at least until Digital Crafter decided to announce Fight of Steel: Infinity Warrior! 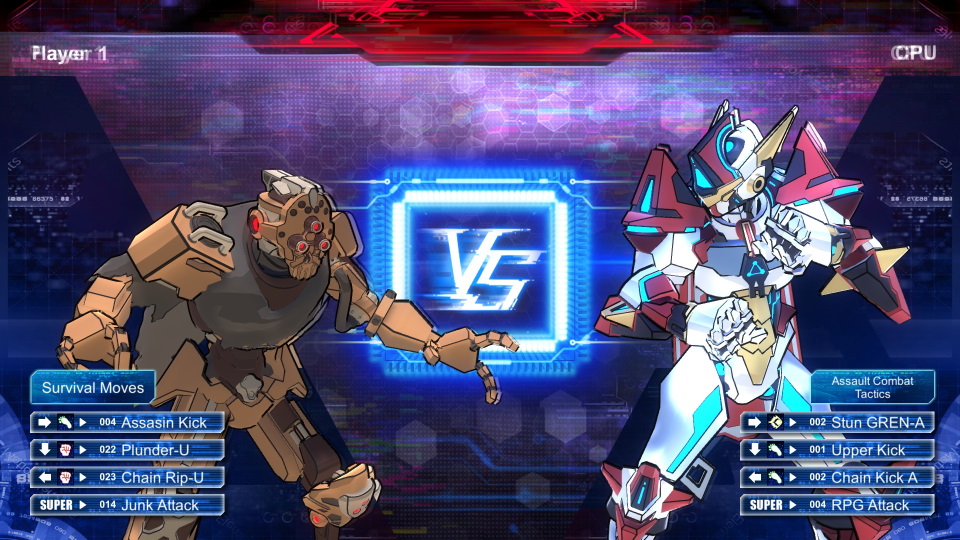 Before each battle, you can see which moves are equipped, and also have a cool preview of your own well-crafted mech.

Digital Crafter is almost a household name in the indie fighting game community, boasting titles like Fight of Gods and Fight of Animals, all made with the support of Unity Universal Fighting Engine 2, but with a custom rollback netcode solution.

Fight of Steel builds on those strong foundations, ramping up the production values and resulting in a more visually pleasing experience, with gorgeous stages and very detailed character models. The robots feel like proper robots and not like humans in a metal suit: They have mechanical hitches and sometimes stiff movements, exactly like I wanted them to be.

However, the biggest selling point of Fight of Steel isn’t the character design per se, but the sheer amount of available customization options.

See, in Fight of Steel, you can literally build your own, personalized robot, by choosing among a decent amount of parts, subdivided into several sets. Each robot is divided into six sections—head, torso, left arm, right arm, left leg, right leg. Each section can be replaced at will, without any effects on gameplay. More parts can be unlocked by playing Challenge Mode and Story Mode, as well as more color options per each part. Overall, the aesthetic customization felt great and limited only by the fact that I didn’t have enough time with the beta to unlock all available sets.

Once you manage to build a combination that satisfies you, you can save it as a preset that can be loaded in versus mode on the selection screen. From this point of view, Fight of Steel is rather atypical, however, since there is literally only one character, that can be edited at will, down to the most basic moveset details. 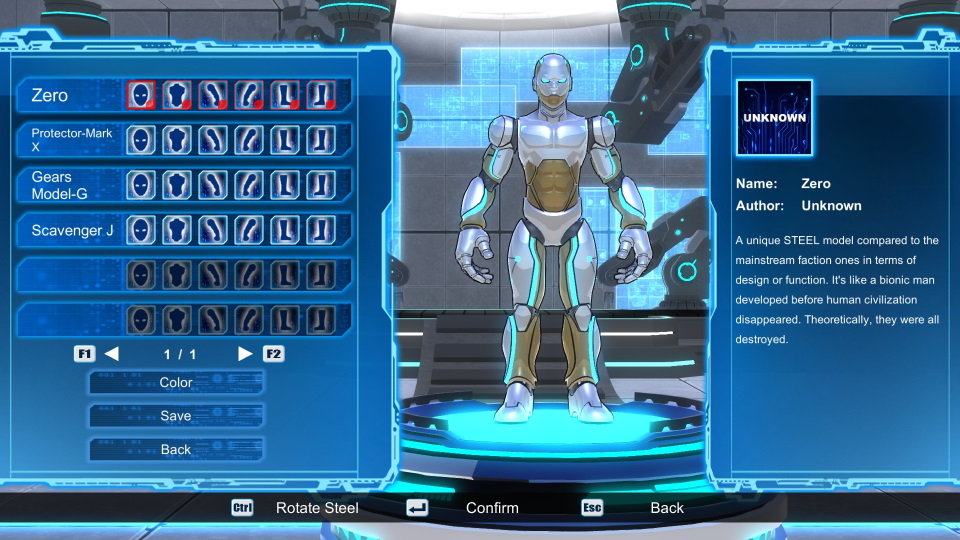 I really didn’t like the default Zero model. Fortunately, I could give it a complete makeover in a matter of minutes, in order to suit my preferences better.

Yes, you read it right: There is only one base character, which you can define according to your favorite playstyle. The nearest examples to what Fight of Steel offers might be the “no export for you” PSX game Kakuge Yaro and, probably, the Kreate a Fighter mode in Mortal Kombat Armageddon.

In Fight of Steel, you can choose among four different basic styles, which define the character’s normal moves. Each of the four sets provides some interesting combo tools and feel worth experimenting with.

Due to the limited time with the beta, I wasn’t able to check all of them, but there were more than enough moves to build a fighter exactly as I wanted to. Fortunately, as per the aesthetic customization mode, you can save presets that can be loaded at will before the match begins. 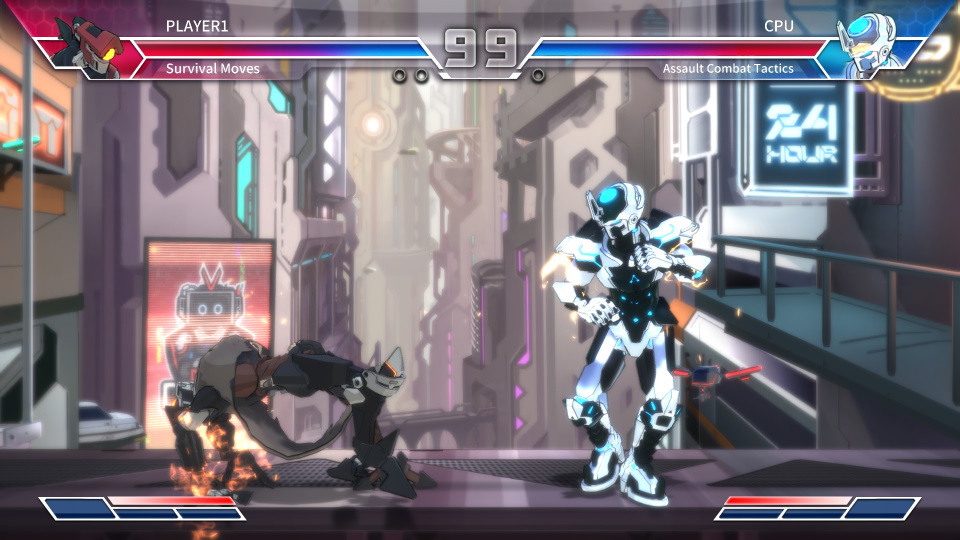 The stages are positively gorgeous and the Survival Moves default walk cycle is just *chef kiss*.

Fight of Steel uses a fairly intuitive input system: Light Attack, Heavy Attack, Special Attack, Grab, Super and Overdrive/Burst, each mapped to its own button. Specials are simply performed by inputting a direction together with the Special button. Pressing it without direction results in a powerful overhead attack.

There are two super bars:

Overdrive mode is reminiscent of The King of Fighters’s Max Mode, since, while it’s active, one can perform EX Special moves at no meter cost.

The meat of the combo system is its freeform nature: Most, if not all attacks can be canceled with a forward dash on hit, allowing for some devastating wall carry and very scenic juggle combos. This system is fairly intuitive and relatively easy to master in just a couple hours of gameplay. Gravity scaling prevents combos from going on forever, but some players found creative ways around it that will be probably patched out soon.

It's so satisfying to pull off those dash cancels into drill into flash kick into super🥳 [Game: Fight of Steel by @Digital_Crafter], #FightOfSteelCBT #gamedev #indiedev pic.twitter.com/uyuh9fkXT2

Fight of Steel, even in its beta state, already shows glimpses of what’s to come. Aside from training mode, customization options and a standard arcade mode, that unfortunately I didn’t have time to try, I could access Challenge Mode and the first chapter of Story Mode.

What was shown of story mode is a fairly standard, visual novel-like progression of scenes, interspersed with fights against the AI. The story follows Zero, our amnesiac hero, after he wakes up in a robotic body without any recollection of his past. Believing he was born as a human, in a world where mankind has been extinct for ages, he ends up saving a gynoid called Artemis from a scavenger and follow her in her quest.

The first chapter was okay, even if a bit of a cliché: Artemis is the only character who looks remotely human-like, in what might be a bit of a slight fan-service drive, while all other characters look like bona fide bolts-and-nuts robots. 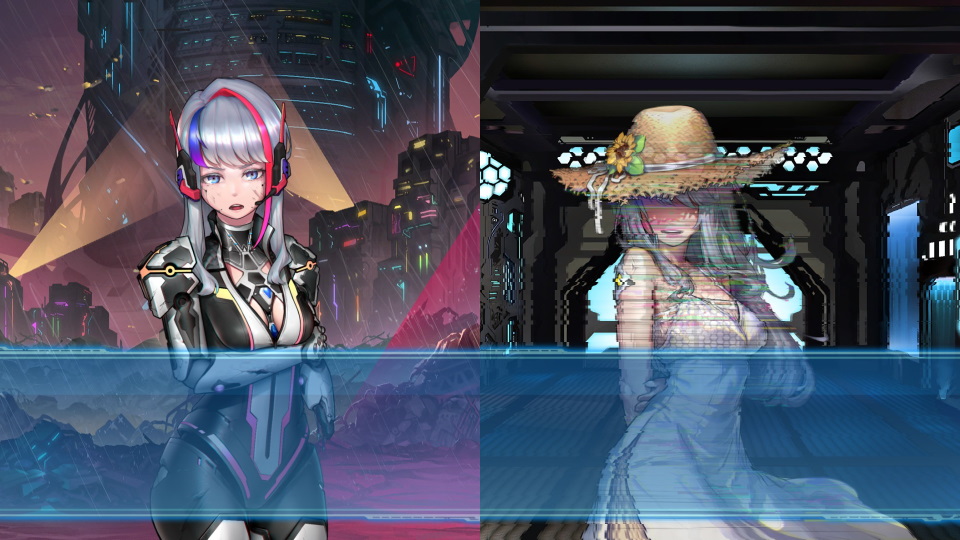 Robot-waifu or hologram-waifu? That is the question. I wonder what was Zero’s connection with them, though, as the first story chapter offers just a glimpse into something bigger. I have my gripes with Artemis’s design, as it is VERY different from that of the playable robot characters, being almost a stereotypical anime girl. However, before hammering down my judgment, I will wait for the full version to evaluate story mode.

Challenge Mode is the single player mode I had the most fun with. This mode offers several maps, of varying difficulty, that must be cleared to unlock new customization parts. Each map is divided into several areas, with enemies of increasing toughness. Every fight drops several custom pieces of armor, with varying stats that can be used to power up your character. Every piece can affect different stats, or even add an element (fire, ice, lightning, void…) to your attacks. Elements have a rock-paper-scissor relation and can make or break a match. Later areas drop rarer pieces, with significant, randomized, stat increases that are vital to clear each area.

In fact, not wanting to grind for more powerful parts, I cheesed out the last two or three matches with a very lame, zoner-y build, focused on projectiles. This allowed me to painstakingly beat the first Challenge Mode boss—no less than Ken, the producer of Digital Crafter himself—and to unlock his model for customizing my mech. 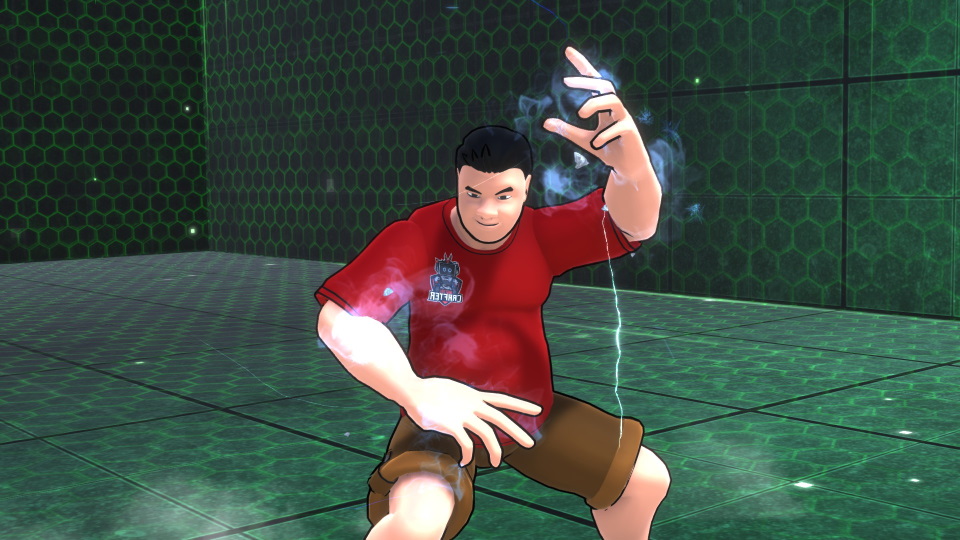 Ken, the producer of Fight of Steel, is going to give you a bad time in what amounts to the last boss battle in the open beta Challenge Mode.

During my time with the beta, I have mostly focused on understanding the game and going through the single player content. However, several players, like SuperCombo’s chief editor Shiburizu, hosted lobbies at various points during the beta, with overall positive results. The game makes uses of an evolution of “Fight of Animals”‘s own rollback netcode, which has already been battle-tested for some time.

We're running it back with the FINAL open lobby stream for the Fight of Steel Closed Beta Test. Let's make it special!

While everything gameplay-related works very well in Fight of Steel, the UI still needs some tuning. Menus are very busy and rather obnoxious to navigate, and the standard F12 Steam screenshot button automatically advances the text in story mode, resulting in my screenshots not having one single line of dialogue saved.

The game’s battle HUD is perfectly fine, but the menu navigation needs a pass of polishing, including removing some lines left untranslated from Chinese. I get that for an open beta this isn’t the main focus, but I think it’s very important for this game’s future, as a more responsive UI would give a better feeling to first time players. 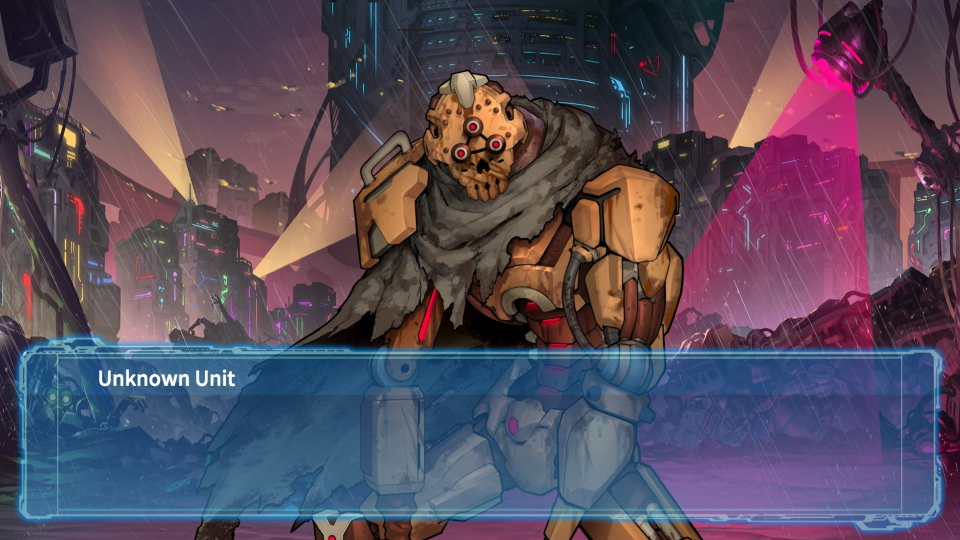 Fight of Steel’s story mode art is great, but the fact that the Steam screenshot button would still advance text forward left me with a sour mood—as none of my screenshots had any dialogue text left.

Overall, Fight of Steel completely scratched my itch for robot-driven fighting games and I can’t wait for its final release. The gameplay is intuitive and very easy to pick up. This might very well be a game I’ll sink several hours into, if only to unlock all parts, moves and to clear Challenge Mode. I am honestly happy to see so much effort poured into offering a competent single player experience, as it is increasingly rare in this genre, and I cannot commend Digital Crafter enough for this choice.

Currently, there is no way to play the game, as the open beta period has just ended. However, you can wishlist it on Steam and follow the developer on Twitter for updates. The development team has also their own Discord server. 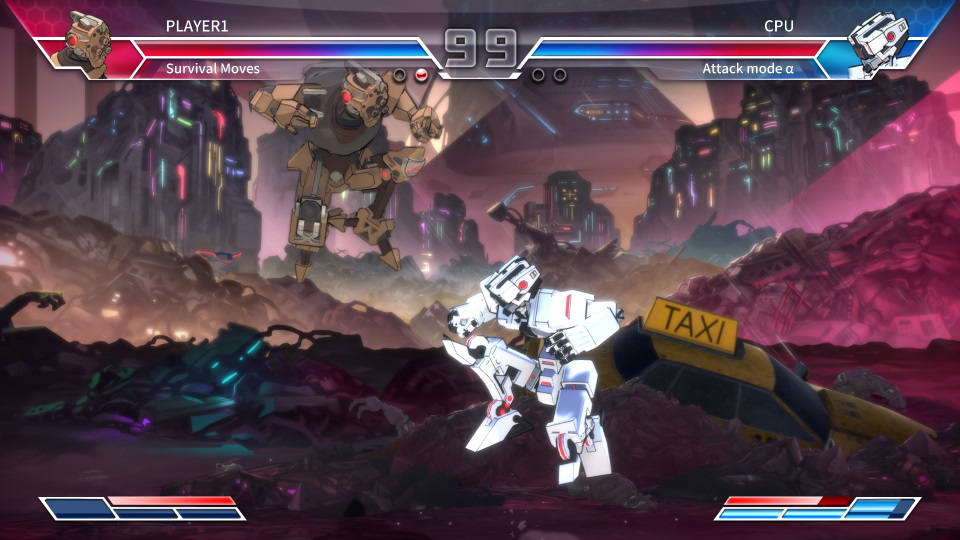 Whatever my issues might be, this game was one of the freshest experiences of 2022 for me, and I’m still positively amazed by how well it plays.

In case you are curious and want to look for some additional clips of the game, Shiburizu compiled a thread with several clips, going over the mechanics and some of the most interesting features it offers, including a full explanation of how Challenge Mode works. You can find all of this and more in the following Twitter thread:

Starting off with a brief explanation of how the customizable characters work and the button layout.#FightOfSteelCBT pic.twitter.com/LhZ3eorGLL

Special thanks to the developer Digital Crafter  for providing me access to the open beta key for this game and to Shiburizu for providing additional information.