This article is part of my ongoing “Indie Fighting Game Thursday” review/retrospective series, now on supercombo.gg! This week we talk about Head 2 Head, a groovy fighting game developed by ArcForged, which brings some interesting design decisions to the table.

For those who are familiar with the indie fighting game scene, ArcForged might be a household name. This small, independent development team has gained prominence thanks to their fan game Sonic Smackdown — a tribute to the Marvel Vs Capcom series that featured Sonic characters and gave them familiar movesets, with more than one reference to Super Mario Bros Z. The game was well received and got some significant stream coverage too, prompting ArcForged to work on an update with full support for rollback netcode (still in development at the time of writing this article).

What is maybe less known, is that ArcForged started working on Sonic Smackdown in order to develop their in-house, Unreal-Engine-powered framework, which was intended to become the foundation for their original IP, Origin of Storms. This engine later became the basis for their own, GGPO-ready, Bolt Framework, which has been sub-licensed to another independent studio — Mishura Games — for their upcoming action game IMMORTAL: And the Death that Follows.

However, before going forward with Origin of Storms (and securing the funding required for such an ambitious project), ArcForged decided to test their new toy with a smaller project, all substance and straight to the point: The chaotical, fast paced, skull-twisting Head 2 Head! 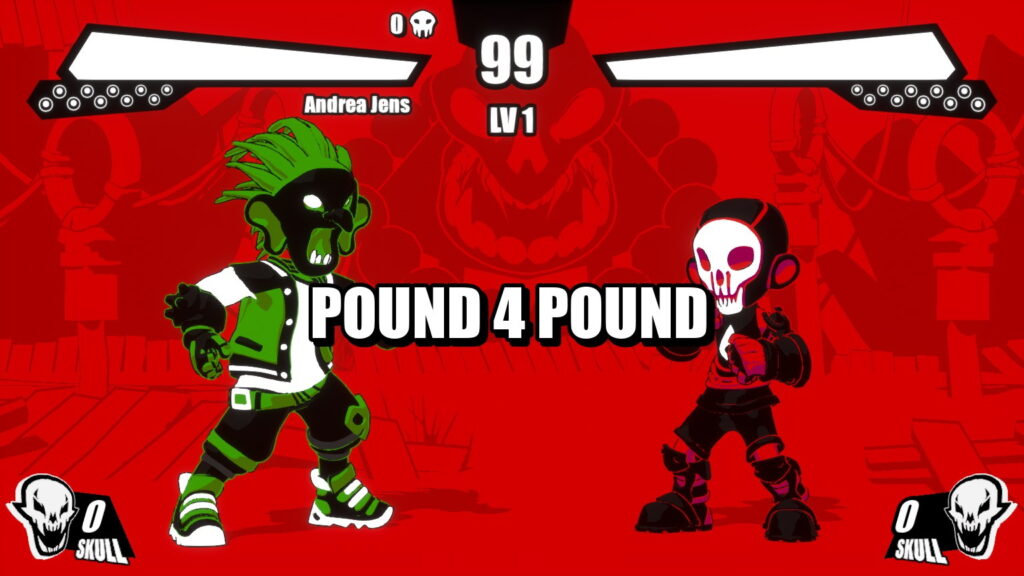 Time to get serious and chew some skulls in Survival mode!

Head 2 Head is a hard game to review, because of its shifting scope. Originally meant as a single player experience with an additional versus mode, it later incorporated a fully functional, rollback-powered online versus mode.  The current version of the game offers just a glimpse on what it will be, featuring an endless survival mode with an ever-increasing AI level, local and online versus, a very simple training mode, and a gallery of sorts for all the unlockable items.

This gallery, aptly called “the Head Case”, contains also a sort of gacha machine, where players can spend their hard-earned skull tokens to roll for new heads. Heads have different rarities and designs, which add to the charm of the game and work in tandem with its head-collecting theme.

By defeating opponents in Survival mode, you can get Skulls that acts both as a super meter of sorts and as currency for the in-game shop.

In the current version of Head 2 Head, there is only one playable character with customizable color, head, and body type. According to the developer, in the future each body type will have its own moveset, but as of today, all variations play the same.

The color, head and body customization options work fine, and it will be very interesting to see how the game evolves to accommodate for more movesets. 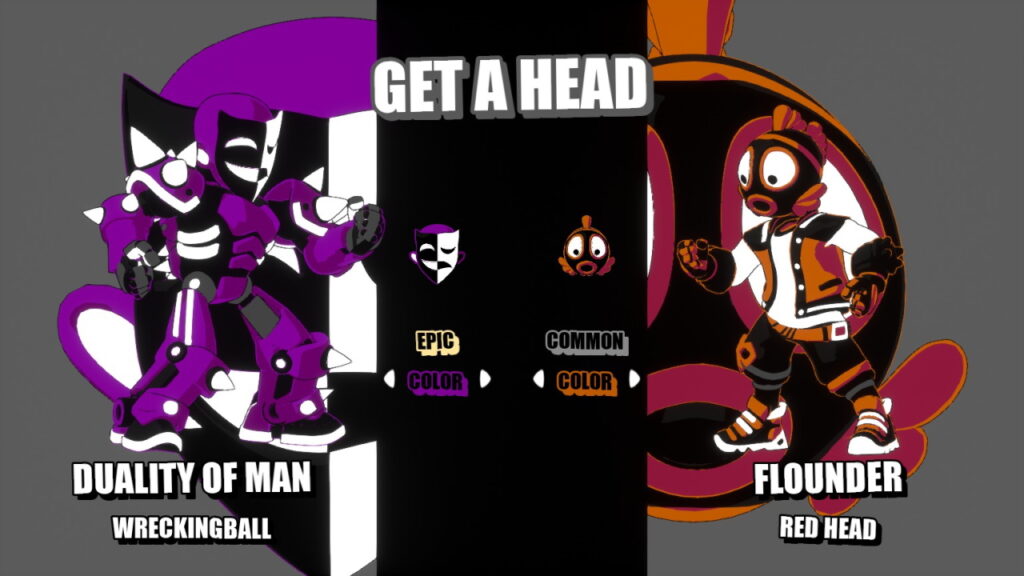 When selecting a character, one can choose between three body types, all unlocked heads and a color. Each body type has currently the same moveset, but this will change in the near future.

Head 2 Head has a very unorthodox control system — not to the level of Input Chaos, but quite far from that of traditional fighters. I had to spend some time to get accustomed to it, and wasn’t a walk in the park.

For starters, characters cannot walk. The only way to move forward and backwards is to tap a direction button to dash. Keeping the button pushed down won’t have any effect, leaving the character motionless. Since it’s something that feels quite unique, I asked ArcForged about the idea behind this design decision, to which they replied that

Its to keep neutral really dynamic and aggressive. Walking slows the pace down a bit. Having to dash forward or back forces you to commit to your decision.

To complete this peculiar movement system, there is no option for crouching or jumping (not directly, at least).

The button layout features a Light Attack, a Leap Attack, a Heavy Attack, a Special Attack and a Super button. All buttons can be combined with a dash in order to perform special moves. For example, Light Attack is your run-of-the-mill jab. However, by pressing it during a forward dash, you’ll get an explosive, wall bouncing punch. By pressing it during a back dash, instead, you’ll get a God Fist-like launching uppercut.

The Leap Attack button is pretty interesting, as it allows the character to leap forward and come down from the sky with a jump-in strike. This move can be canceled at any time with a dash forward or backward, effectively turning it into a bona fide jump. Alternatively, by pressing any attack button during the leap, the character will perform an air attack. Air attacks follow the same rules as standing attacks, as there are variants for each of them, tied with a specific dash direction.

In addition to the above universal mechanics, almost every move’s recovery frames can be dash canceled on hit, allowing for some crazy combo and a certain degree of creativity.

Last but not least, the game has no grabs, but many moves deal a significant amount of chip damage, which makes turtling not really an option in the long run.

Offensive bursts can be used to reset the combo limit and to unleash spectacular enhanced special moves. Off topic, but the Xenomorph head is kind of cute, I wish I unlocked it already.

Combo limits and how to break them

This game has a strict combo limit, which doubles as an infinite prevention system: After 10 hits, the opponent will get free from any and all combos, resetting the situation to neutral thanks to an auto-burst. However, there are ways to avoid this: By using the Super button, your character will consume one Skull to perform a sort of offensive burst that will reset the combo limit to zero.

Pushing any attack button during this state will trigger a powered up version of a normal move, which won’t contribute to the combo limit and will deal significant damage. Pushing a direction will instead result into a Dragon Ball-like instant teleport. By pressing the Super button immediately after the Skull burst, the character will perform a very damaging, lighting-kick-like super move that will consume one additional Skull.

After using this offensive burst, the remaining Skulls will be subject to a short cooldown, after which you’ll be able to use your enhanced moves again.

During Survival mode (the only mode available outside of versus in the reviewed build), you will get Skulls by defeating opponents and “stealing their heads” at the end of a match. The number of acquired stocks will go up as the AI difficulty increases, as it will the number of Skulls each opponent has at their disposal. When playing versus mode, each character starts with 5 Skulls, which cannot be replenished once used and carry over between rounds.

I am not gonna lie, I needed quite some time to understand this system and rewire my muscle memory, but once I have learned the basics of dash canceling, I have managed to land some very satisfying, crunchy combos.

Speaking of Head 2 Head, the combat system feels quite unique and might require some attunement time, but the combo possibilities are actually quite cool😎 [Game: Head 2 Head, by @ArcForged, now in EA with rollback netcode] #gamedev #indiedev #FGC pic.twitter.com/W8M9Z0prg3

A bizarre, yet charming experience

Head 2 Head’s strongest point, together with the above mentioned combat system, is its surreal aesthetic, with monochrome backgrounds (whose color, by the way, can be switched in the settings menu) and a catchy, groovy soundtrack that seems to feature new songs every few levels in Survival Mode. The selection of collectible heads is remarkable and gives a reason to grind Survival mode over and over, thanks to the built-in “head gacha” system. The game doesn’t offer a lot of content yet, but it’s very good at showcasing what it might become. If anything, I wish opponents in Survival mode picked random heads and random colors, to increase the visual variety, but this is a minor quip. 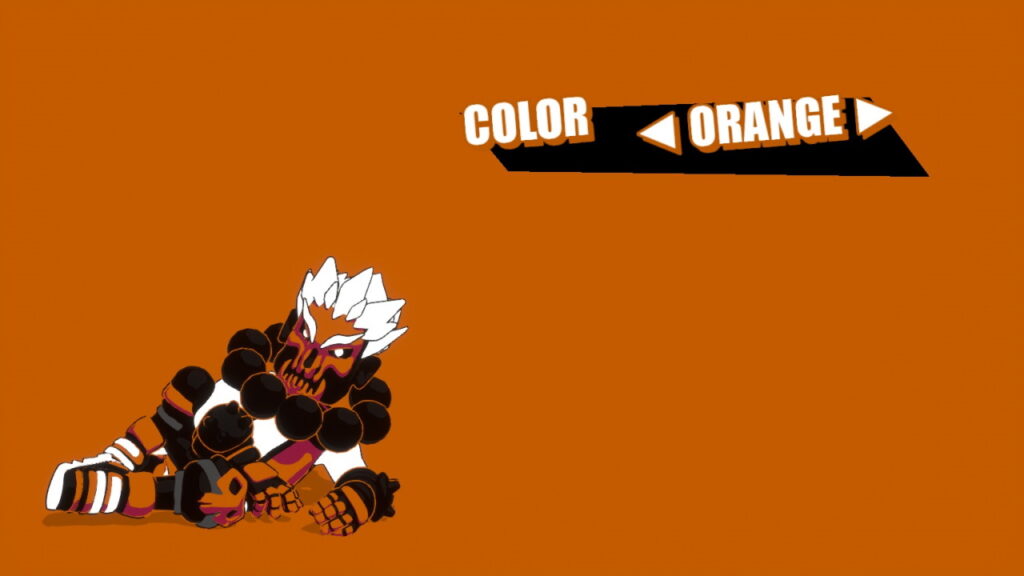 Of course, you can switch the background color to match your tastes. And, equally of course, that looks like an angry Akuma face. Head 2 Head is chock full of small homages like this.

ArcForged is actively working on an additional set of features to improve the single player experience, including persistent stats and Skullteria, an equip system similar to the Materia System from Final Fantasy VII. Apparently, each build will be able to be used online, because the engine remains deterministic.

Quoting the developer (emphasis mine):

We’ve started implementing stats for the roguelike part of our game. Thankfully everything is still deterministic so these kind of wacky build based character fights can happen online. Stats will come from a few different places. The game will have persistent stats/buffs on the characters themselves from leveling up. Heads will also be able to be improved using the Headscension system. You’ll be able to power up your head, increasing its potential and allowing you to add Skullteria slots, link slots or change the color of the slots. Skullteria are like Materia from FF7, containing stats or skills, with a leveling mechanics.

And, finally, RNG buffs as part of the roguelike mode, where you can add a stack of buffs with varying rarities after defeating enemies on the gauntlet.

For VS mode, characters will be locked or brought up to lv 50, to keep stats near each other.

Stats will becoming in successive phases and won’t be implemented all together, but this sounds like a solid plan. I am a bit unsure how balanced the custom builds will be, even when levels are evened out, but this is something that will be interesting to see once they are implemented.

#Head2Head Phase 1 of stats has been implemented on testing side. Here you can see RedHead's Agility pumped up to the max, 999 which increases his move and attack speed. You can build your characters however you want with Stats, Heads and Skullteria! More updates to follow! pic.twitter.com/qpkyRhzUGX

Head 2 Head is on sale for 5.99USD on both Steam and itch.io, currently in early access. The game features native rollback netcode and some basic game modes, with a lot more planned down the line. The itch and Steam version can play together, since, under the hood, Head 2 Head uses Epic Online Services for crossplay. The developer has an official website and a Twitter account that is used to post news about the game and their other projects.