This article is part of my ongoing “Indie Fighting Game Thursday” review/retrospective series, now on supercombo.gg! This week we talk about Tiger Tournament, a striking tribute to the first two Mortal Kombat games that revives the tradition of digitized actors.

From the deepest depths of The Community Lab

The Community Lab never ceases to amaze me. Somewhere, I have defined it as Mos Eisley’s Cantina, with more obscure game enthusiasts and less light-saber-arm-cutting. I stand by this definition and I believe it to be most accurate. Without the fine folks there, I would have never crossed path with Tiger Tournament. a game that feels as unique as it is derivative and that can be incapsulated in one question: what if one person remade the first Mortal Kombat on their own, using almost the same development techniques?

And with that I mean… what if we used digitized actors for the game? 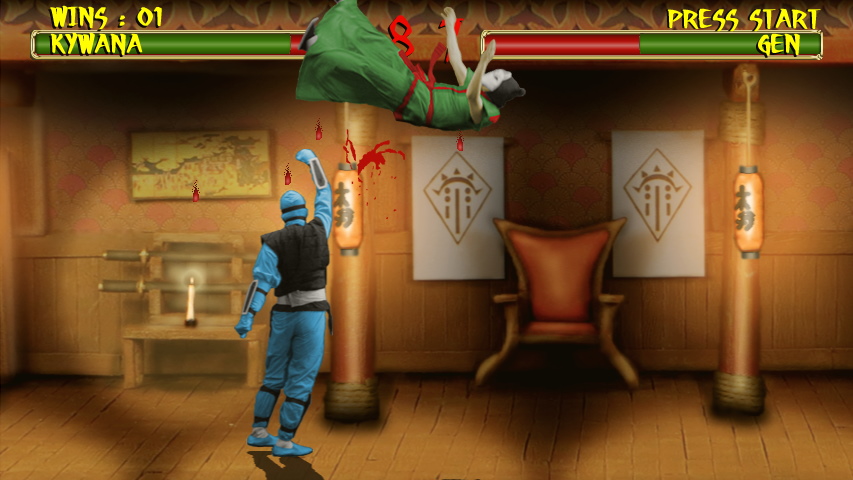 The practice of digitized actors has kind of died after its 90s peak. After Mortal Kombat pioneered the idea, several clones and games following hot in its trails blossomed for a small amount of time: Kasumi Ninja, Survival Arts, Tattoo Assassins and, most importantly, Street Fighter: The Movie: The Game. However, no game reached Mortal Kombat’s peaks of popularity and the technique was soon forgotten, only to resurface years later in some independent fighting games. 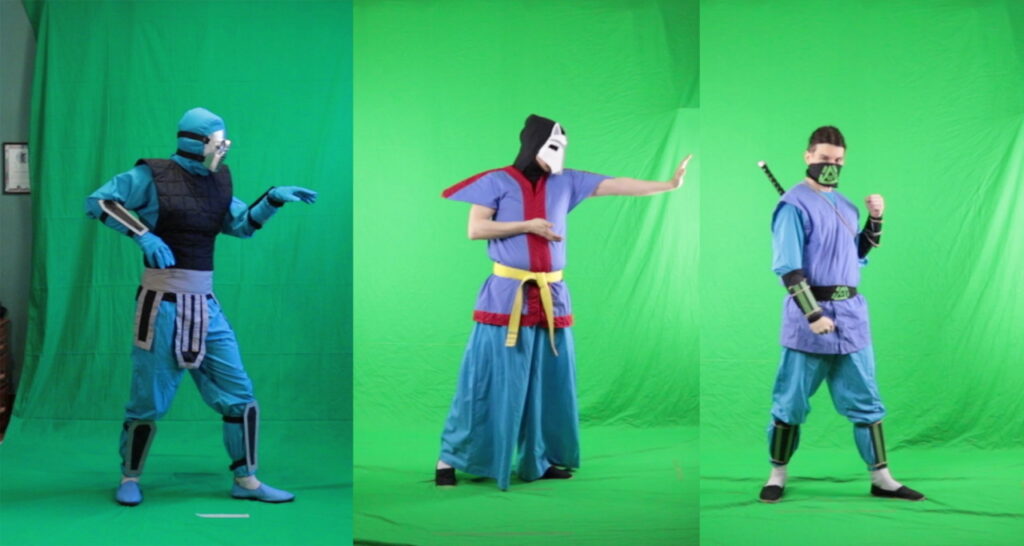 The digitized actors used for Tiger Tournament: green screen, home made costumes and a lot of creativity. From left to right: Kywana, Gen, and Henchi [source].

That’s why I was incredibly surprised to learn that Tiger Tournament made use of high definition digitized actors, filmed on green screen no less. Maybe even more surprising was the fact that stages were built as small dry clay dioramas, filmed and later converted to sprites for the game.

The model used for the graveyard stage, which was later photographed and converted to a sprite for its use in the game [source].

While the game might feel derivative and overly inspired by the originals, we don’t see this kind of commitment every day. The developer, Andrew Spicer, wanted to make this game since the early 90s. I can totally relate to him, since it’s about the same time window where I first thought about making Schwarzerblitz (funnily enough, at that time I was even calling it Final Kombat).

By going through Spicer’s development notes, I see glimpses of a long development history, starting in 2009 with a MUGEN prototype whose source is now lost to time. Some of the videos survive on his YouTube channel though! In the following video, you can get a glimpse of a test for a character named Armor, who is yet to be seen in the newest version of the game.

He would later restart development in 2018 from scratch, this time with another game engine and with HD sprites. Notice that Andrew Spicer is also a one-man-rock-band. As one of my collaborators put it, he might be the equivalent of one of those Renaissance kind of multi-talented people who can do a lot of stuff and do it right. As such, I’m excited to see where the new Tiger Tournament will go!

But how does the game play? Well… it’s complicated. Tiger Tournament wears its Mortal Kombat inspiration on its sleeve. There are four attack buttons (Low Punch, High Punch, Low Kick, High Kick) and a block button. There are some universal command normals, inputed by pressing back or forward plus an attack button, including sweeps and the klassic Mortal Kombat uppercut. Mashing Low Punch or High Punch causes the character to attack several times in a row. Grabs are performed by pressing forward plus High Punch near an opponent.

There are no movement options outside of jumps and walking. The walking speed is the same for going forward and backward. For additional details, there is a page on the developer’s website explaining the basic commands in detail, with pictures from Kywana’s moveset.

Special moves are performed by means of klassic motions (without diagonals) followed by a specific attack button. Surprisingly, there seems to be a sort of infinite prevention system, which doesn’t really work that well, but it’s a start. For starters, it doesn’t catch all possible repetitions, but just some juggles (as in the video below). Moreover, it doesn’t seem to REALLY work as intended in the corner.

As a fun additional fact and in the full tradition of the game this was inspired by: Tiger Tournament has two built-in cheat kodes for disabling blocking and disabling grabs for both players.

Tiger Tournament currently sports a roster of three characters that feel like remixes of Mortal Kombat kombatants. Kywana, aesthetically similar to a ninja but with his own twist, has Kano’s knife throw, a move similar to Reptile’s dash uppercut and a spinning flying kick. Gen, the masked fan bearer, has a fan wind launcher, a teleport and Kitana’s fan throw. Henchi, a more traditional ninja, throws shurikens, uses Sub Zero’s slide and slashes with his katana.

This game wouldn’t be a Mortal Kombat-inspired game if it didn’t have Fatalities — pardon, Dim Mak. Currently, each character has only one of them and they are performed exactly like you would expect from an MK game. Credit where credit is due, though: They are well done in their simplicity. Kywana poisons his opponent with his acid breath, Gen teleports inside the opponent and jumps out of their chest and Henchi simply slits their throat. Not flashy, but not bad either. 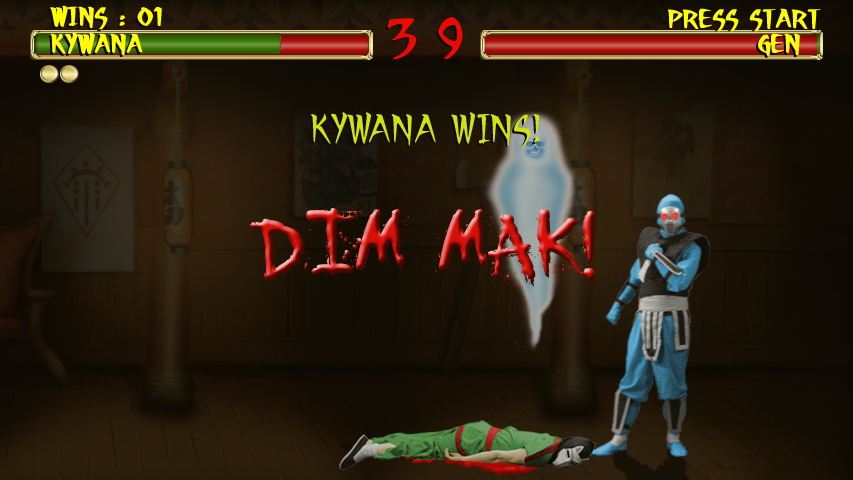 The soul of the opponent leaving the body is a nice touch in what essentially is Tiger Tournament’s own brand of Fatalities.

The game is still in early stages of development, and it shows: there is no training mode, the input detection goes baloney when both a joypad and a keyboard are connected, and there is no real button remapping screen. The only way to play a multiplayer match is to have player 2 press Start (or the equivalent keyboard button) during an arcade run or in the character selection screen.

Speaking of arcade mode, the AI is very poor, will never use special moves and it is very easy to zone out with projectiles. Moreover, once reached a certain match, the game will simply break, with the on screen character spinning through random animation frames with no hurtboxes or hitboxes, effectively freezing the game and impeding any additional progress.

However, this game has an unquestionable charm. It might be a Mortal Kombat klone, but it has passion pouring out from any pore. Tiger Tournament is probably the nearest thing to an HD remake of the first two Mortal Kombat games I have played until now and it feels incredible, when it works. 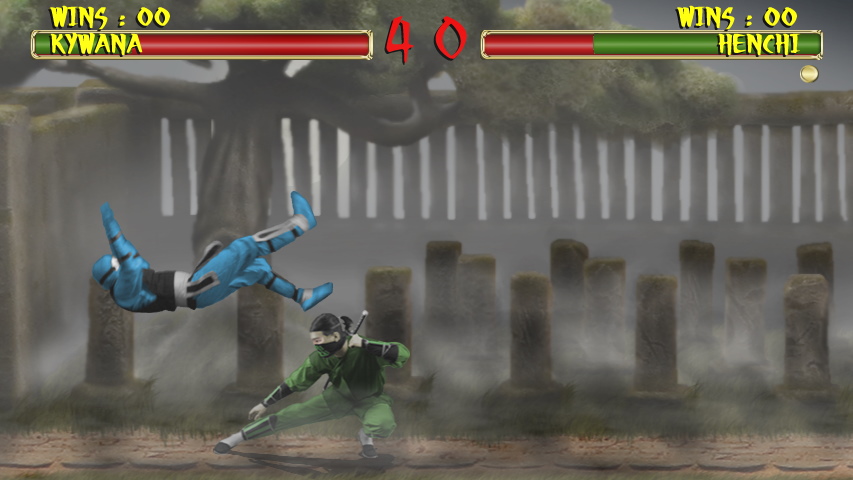 Henchi’s slide might combo into itself. It’s not easy to understand due to the lack of a training mode, but there seems to be no window for the other player to escape the off-the-ground attack.

How to get it?

Tiger Tournament is available as a free demo on the developer’s official website. There is also a Facebook page where the developer posts game updates (the latest at the moment of writing this article being on 3rd April 2022). As discussed above, the available demo has some input troubles, especially when playing with a joypad and a keyboard, and a very basic AI, but it’s still worth checking out.

The feeling and soul of the game are already there, and it’s a wonderful window on what it might be.

As a closing note, some of you might have seen this tweet of mine. Despite the meme for attention catching, I genuinely love how this game is coming out and I truly hope I’ll be able to play more of this “home-made” one-developer-titanic-effort game!

Name of the game: Tiger Tournament
Developer: Andrew Spicer (official website, Facebook page)
Available on: PC (direct download)
Price: free
Year of release: in progress (version tested as of April 2022: ver. 7.0.2012 – DEC-20-2020)
Engine: unknown
Netcode: none (Parsec not advised, as this game has input issues in multiplayer)
Status: early access
In one sentence: A one man effort to build a Mortal Kombat game, with self-made digitized graphics and familiar gameplay.

Special thanks to lordzeus from the Community Lab Discord server for bringing this game to my attention!