If you weren’t quite sure whether or not “offline is back” look no further than CEO 2021 going down December 3-5 with 10 official tournaments, side events galore and what will surely be a full house in Orlando, Florida. Read on for schedule, stream links and side event details.

The official tournament games at CEO 2021 are: Guilty Gear -Strive-, Street Fighter V, Tekken 7, Super Smash Bros. Ultimate, Mortal Kombat 11, Granblue Fantasy Versus, Dragon Ball FighterZ, Ultimate Marvel vs. Capcom 3, Skullgirls and Blazblue Cross Tag Battle. Pools will be divided between Friday December 3rd and Saturday the 4th for a majority of the games with most finals on Sunday the 5th. Guilty Gear -Strive- will close out the event on Sunday.

All games will be streamed across six channels: CEOGaming, VGBootcamp, TampaNeverSleeps, DataFGC, PolarityGG and JuicyGameNight. 6 out of the 10 Top 8s will be streamed on the CEOGaming Twitch channel. Smash Ultimate will be entirely on VGBootcamp. Refer to the official schedule below, all times in Eastern Standard Time: 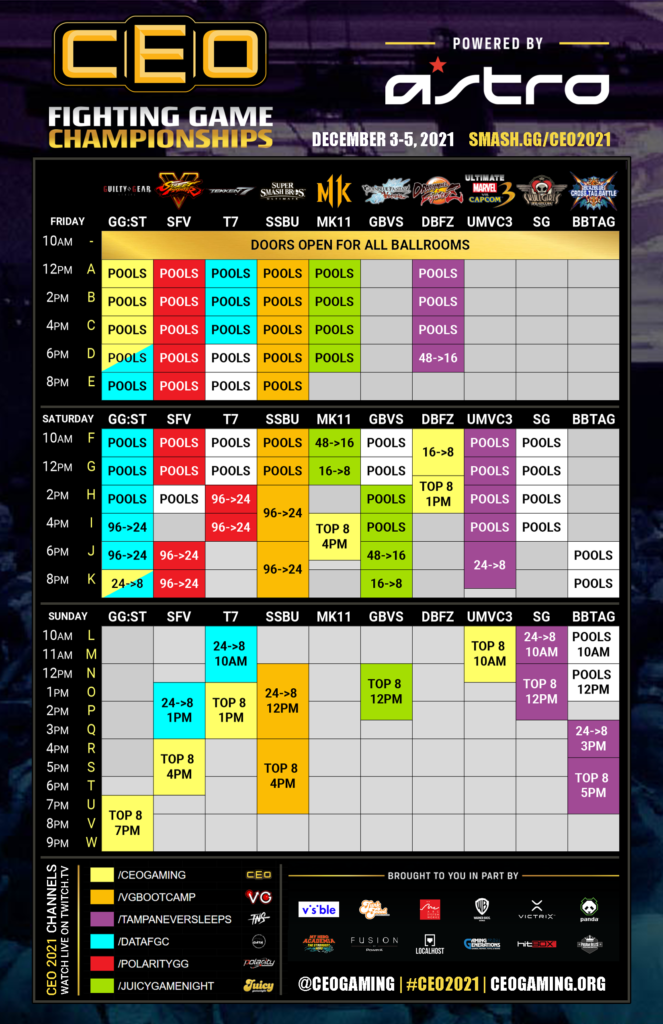 Alongside CEO’s 10 official tournaments you can expect 7 community tournaments going off throughout the day. Not all events are expected to be streamed, however this article will be updated with uploaded recordings of the events as soon as they are available. Nonetheless, here’s a list of events and sign up links if you are already planning on attending CEO and want to get in on the action. All times in EST:

A return to form for the FGC

As 2021 comes to a close the offline gatherings have swung into motion once again, from small locals to flashy exhibitions like Red Bull Kumite or multi day efforts like Climax of Night. CEO 2021 is in my view a return to the large-scale cross-community gatherings we are well known for, and I look forward to watching as much as I can. I would like to afford a quick mention to Granblue Fantasy Versus at CEO, which is actually seeing the first major offline tournament for the game ever since it released right into the jaws of the pandemic.

Talk about CEO 2021 with our community on the official SuperCombo Forums thread!