This article is part of my ongoing “Indie Fighting Game Thursday” review/retrospective series, now on supercombo.gg! This week we talk about Heatwave, 2D pixel art air-dasher available on itch.io! This article was originally published on my Medium blog and has been ported to Supercombo.gg for preservation and sharing it with more people in the fighting game community! This version of my article updates the original, talking a bit about the new team mode.

Pixel art is hard. Making sure a bunch of colored dots can be recognized as a character from a distance and drawing moves that are readable at any resolution takes effort, patience, a lot of trial and error, and a non-negligible budget to pay your artists. That’s one reason why most big names in the fighting game genre (Capcom, Arc System Works, and SNK, only to cite the most prominent) have moved towards 3D models: once you produce your animations, you can still re-target them to a new 3D model instead of — you know — having to redraw every single frame nine thousand times. Conversely if one animation is wrong, you can redo that without having to touch the underlying model.

Even developers which kept creating 2D games, like French Bread, had a shift from very well animated sprites of smaller size for the original Melty Blood, to very clear, highly detailed key-poses and less in-between frames for their Under Night In-Birth series.

Yep, good pixel art is hard. And sure, the smaller you go with the sprite size, the faster it gets — but also messier and easier to become confusing. There are games that become so fizzy that is impossible to follow what is happening on screen.

Meanwhile, on the opposite side of the scale, there are gems such as the wild, colorful, gorgeously minimalistic air-dasher Heatwave!

Don’t get fooled by the game’s apparent minimalism: at its core, the game is a legit-to-the-Angels air-dasher, with tight controls and tidal waves of combo freedom. You have your light, medium and heavy attacks (A, B, C in in-game notation, respectively), and a parry button (D). Special moves have each three versions, with the C version consuming one super stock for performing an EX special move, which defaults to the B version if you character doesn’t have enough meter at their disposal. Super moves are universally performed by inputting quarter-circle-forward plus D and use up two stocks. Ultra moves deal significant damage and can only be performed by inputting quarter-circle-backwards plus D when your character has less than 30% remaining health. They cost two stocks too, which makes them nice as a last-ditch-effort comeback chance.

In addition to all of the above, there are also techable grabs, bursts (tied to a burst meter) that can be used either to escape a combo or to cancel your own attacks, the equivalent of Dead Angle Attacks (that is, invincible attacks that can be done while blocking at the cost of two super stocks to interrupt the opponent’s offense) and, most importantly, an Assist button.

There is a wealth of assists one can choose from, ranging from HUGE death beam, screen cleaning assists with very slow recharge time, to quicker-to-charge utility assists that can be used to keep the pressure going. Assists are very important to complement one’s point character, so it’s good to experiment among all possible combinations to see what fits best. However, notice that a character cannot equip themselves as an assist, thus slightly limiting your selection — but not in any significant way.

I personally loved the big devil full screen beam assist, for how powerful it feels. Sure, it’s slow and there are ways around it, but from a casual perspective, that move is just awesome.

Speaking again about the controls, despite this game using motions, they are all exceedingly simple (compared to your traditional fighting game): everything is tied to quarter circles or double tap down, so there is no fancy half circle motion or anything more byzantine (say, no Maou Rebirth Ranbu pentacle motion). To improve accessibility and providing a better feeling to stick players, the double tap down motions can also be performed by inputting a standard dragon punch motion. This simplicity is a welcome feature, as between jump cancels, dash cancels, air dash loops and everything in-between, there is already a lot that needs to be factored in, both offensively and defensively.

The action starts as soon as the “Start!” signal comes in, and goes on blazing fast for the whole duration of the round. The AI is already challenging enough, up to peculiar input-reading frustrating moments at the higher difficulty levels.

Heatwave offers a choice between three distinct fighting styles that change consistently how a character is played. These styles are currently named Speed, Power and Team, with Speed based on —  well, speed and movement options, while Power is centered around pure brute strength, and Team provides a full-on tag system, where, instead of a point and an assist, you have two playable characters.

Speed is your classical air-dasher style: you have very lenient gatling combos, air dashes, double jumps, a short hop accessed by quickly tapping down before jumping, all allowing to string together a massive, rapid offensive barrage of attacks.

Power takes the traditional air-dasher formula and breaks it down to smithereens: no double jump, no air dash, no short hops, no running. Just one (short) jump, a high jump that replaces the short hop and your basic dash. In addition to that, you lose access to all gatlings and normal cancels. However, to make up for this, parries dizzy the opponent when successful, all Low attacks hit off-the-ground once per combo, normal moves deal chip damage on block, and the damage is overall higher. Furthermore, Power characters get access to a new “overdrive” mode when they have full meter, accessed by pressing down down D, which slowly drains the meter over time but gives access to unlimited EX moves, halves the cost of super moves, allows for dash canceling literally everything and grants access to ultra attacks with health above 30%.

The fact that some players think that — despite all these buffs — Speed might still be the better style speaks volumes about how important having a fluid movement around the stage is in this game.

The third style, Team, was added after my original review of the game, in version 0.9.8, and allows for having a team of two characters that can tag in and out at will, with directional assist moves (activated by pressing the Assist button plus forward or backwards) and a greater flexibility, but with a couple caveats: for starters, the energy bar of each character is halved and assist-only characters cannot be selected for a team.

Tagging in and out is assigned to the Burst button. Using Burst in neutral will simply tag the second character in, while using it during a combo will make them enter the stage with an additional attack, which will be different if the combo is grounded or aerial.

I haven’t fiddled enough with Team mode yet, but it looks like a welcome addition to a game that had already a high skill ceiling. Time will tell how this style fares against Power and Speed. 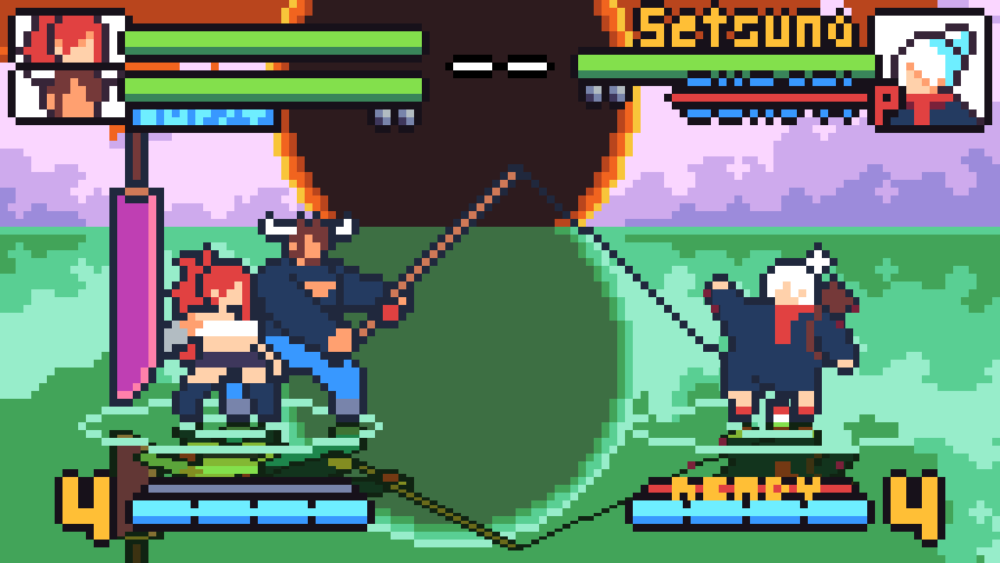 Team mode was added from version 0.9.8 on and allows for a totally different experience, transforming Heatwave into an air dasher tag game.

I am a sucker for lore. There’s nothing I can do about it, a good story can sell me a game even more than polished AAAAAAA graphics and state-of-art rollback netcode. Sometimes, I find myself spending consistent chunks of time reading in-game archives and descriptions of lore-related items, trying to put the pieces together. I also have a soft spot for post-apocalyptic or during-the-apocalypse kind of stories and get a singular kind of excitement in understanding the chain of events that originated the current state of the world.

While Heatwave doesn’t have any in-game story mode, at the moment, it offers a complete archive that contains the full “how did we get here?”, presenting a tale of environmental disasters, alien angels, the Hell gates opening and devils living together with humans on a flooded Earth.

If someone is interested in the topic, there is literally a full chronology to taste, also including a full list of character profiles. I hope this will be further expanded once the game enters a more finished stage and arcade mode is properly implemented.

Currently, Heatwave allows you to choose between sixteen playable characters, which cover several different archetypes. You have April, your go-to rushdown rekka, Setsuna, a ninja with kunais and teleports, Hawke and Apollo, a duo character with combination moves, Rain, who is the answer to the question “what if I put a Touhou character in a traditional fighting game?” and Leaf, who takes ample inspiration from 3D fighters, with their large arsenal of strings, plus a flash kick, a demon flip and other nifty tools that — on paper — make her slightly on the top side of the tier list. There are also characters with additional resources, like the swordsman Sparrow and the martial arts master Clay, both of which have some unique mechanics and special meter management.

To complement the roster, each playable character can also be selected as an Assist. There are also some assist-only characters, which increases the variety of possible approaches and combinations.

Notice that, while fourteen characters are available from the beginning, the sixteenth is actually a secret character that can only be unlocked by clearing a certain amount of matches in a certain mode with a certain character in your team. I cannot say more, otherwise Monochromesoft will send eleven ninjas to snipe me in my sleep — which could be slightly unhealthy for my own survival and not advisable to reach retirement age. That said, someone already managed to unlock them, so you might as well ask in the Discord server and put someone else’s life in danger instead of mine.

What’s in the box?

The current early access version of Heatwave offers a training mode, tutorials, a standard versus mode, combo trials and an endless survival mode, plus some nice extras like an in-game gallery with character profiles. As of September 2021, the developer is working on finishing up the arcade boss and building her playable version. The game is already quite solid and — in my opinion — it’s already worth more than the five bucks it costs, even only for the sheer variety of characters and fluidity of the gameplay.

How to play it

Heatwave is sold on itch.io in Early Access for 5.00 USD, and includes any future update the game will have. It has currently no netcode, but can be played online using middleware like Parsec. The game has an official Discord server managed by the developer, with exclusive work-in-progress and behind-the-scenes clips.

Name of the game: Heatwave
Developer: Monochromesoft
Available on: PC (itch.io)
Price: 5.00 USD
Year of release: in progress (current version as of November 2021: 0.9.8.1)
Engine: Game Maker 2
Netcode: none (Parsec)
Status: early access
In one sentence: 2D minimalistic pixel art air dasher with assists, extreme combo freedom, a wealth of mechanics and everything you love about the genre.

Special thanks to YellowSlotCar for proof-reading the article.